How does a Captain of the massive ships we see on our beautiful Great Lakes end up in Flint, Michigan? How does a person who has sailed throughout the world become the owner of the Dort Financial Center, Iceland Arenas and the Ontario Hockey League’s Flint Firebirds? The answer is simple: hard work, passion and determination to fulfill a life long dream. 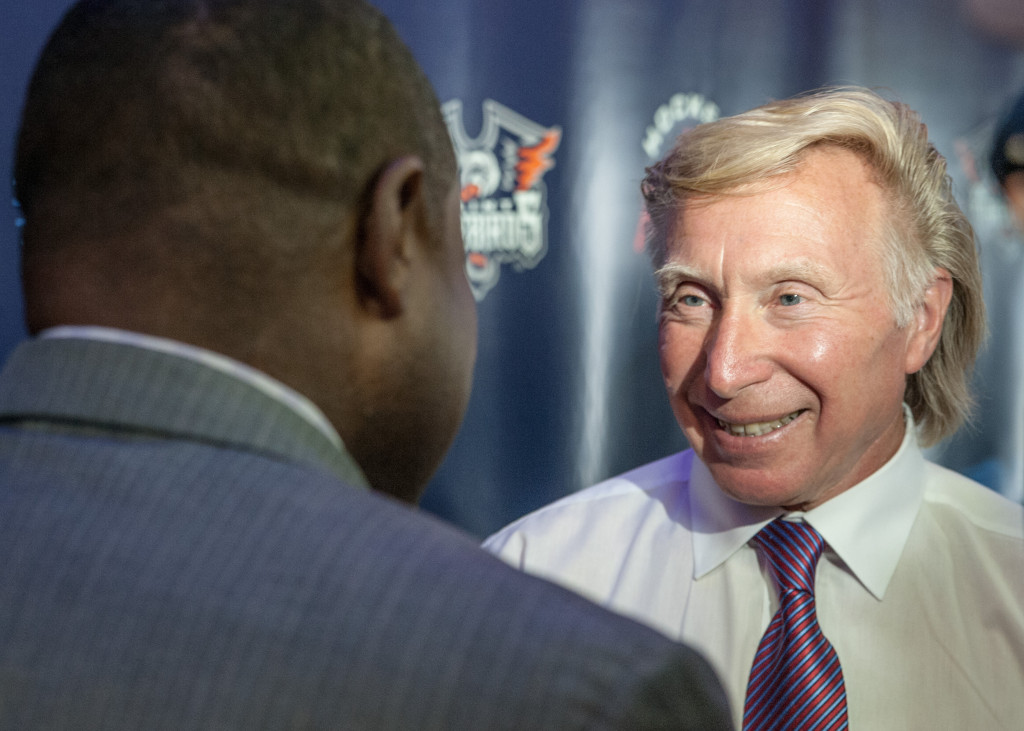 Rolf Nilsen grew up in a small town on the coast of Southern Norway. His family has always been involved in the Marine Industry, beginning with his great grandfather who was a captain and owner of a sailship in the late 1800’s. His Grandfather was a sailor and a World War II Veteran and his father was also a sailor. Rolf naturally gravitated to the Marine Industry as well but like most kids growing up, he had a love for sport and the competitive spirit to be successful.

The Alpine Skiing Events are probably the most notable sports to take place in Norway today. Since his youth, Rolf really enjoyed ski jumping and bandy, a game that is played on a frozen soccer field where opponents try to score by shooting a ball with a bowed stick into the other team’s goal, as his sports of choice. Most of us would have a hard time climbing to the top of a mountain, let alone landing a perfect jump. Not for Rolf Nilsen, he loved the thrill and risk it took to be successful. Even in bandy. Though it wasn’t ice hockey, there were many similarities and this is where his passion for our game began. He now plays ice hockey on a regular basis and is currently a member of the Detroit Red Wings Alumni Hockey Team and plays benefit games with them on a regular basis.

Like most athletes, the competitive spirit in sport usually serves them well later in life. In Mr. Nilsen’s case, it helped him develop and create one of the most successful marine solution companies in the world, IMS AS, which is based in Norway. Rolf’s North American company, IMS Inc., is based in Cape Coral, Florida where he currently resides today. Along with Norway and Florida, Rolf also has companies in Germany, Singapore, China and Vietnam.

In December of 2014, Mr. Nilsen purchased the Dort Financial Center and immediately was in the market to acquire a hockey team to play their games there. Initially there was interest in the USHL but when the opportunity to purchase an OHL franchise became an option, he moved quickly to negotiate a deal with the owner of the NHL’s Carolina Hurricanes and the OHL’s Plymouth Whalers, Mr. Peter Karmanos Jr. With the local support and help from the City of Flint, the Flint & Genesee Chamber of Commerce and local politicians, the sale was approved by the OHL Board of Governors and Flint became one of only three cities in the United States to be able to say they have an OHL franchise.

Immediately, Mr. Nilsen began making capital improvements to the facility to make it more fan-friendly with the intentions of also turning it into one of the premier player-training facilities in all of Junior Hockey. In just the first year, he invested more than 4 million dollars for new hockey boards and glass, a new scoreboard at center ice with high-definition video screens on all four sides and added new LED lighting for a better fan viewing and TV game production experience. Under the management of Dort Financial Center General Manager Jeremy Torrey, the player’s arrived for their first season in Flint and found that they had a new pro-style locker room with a video theater for viewing game film, a player’s lounge and a state of the art weight room for off-ice conditioning. Additionally, when NHL Scouts and out-of-town media saw the new suite located in the northwest corner of the event center, many stated that Flint now has one of the best viewing areas to watch a game in the OHL.

Nilsen has not stopped investing into the building since he took over and has more plans to continue to enhance the event center to make it a destination facility in the region. In year two, the main arena’s bathrooms were refurbished. Nilsen also began the renovation process of the Dort Federal Event Center’s second arena, a 30,000 square-foot space that is utilized for many events each year such as trade shows, expos, banquets, concerts and field sports. The second arena received a complete makeover with the addition of LED lighting and a fresh coat of paint on the bleacher seats, walls and ceiling. Nilsen and Torrey are in the planning stages of refinishing the floor to complete the full renovation of the second arena.

Energy conservation was a main focus this past summer as Nilsen made the necessary investment to upgrade to LED lighting throughout the entire Dort Financial Center. Also, the two suites and Blue Line Club were renovated with new couches, chairs, tables, and refrigerators. Video technology was enhanced, as new HD cameras were installed with the addition of a closed-circuit TV feed of the game production for the Firebirds’ locker room, suites, club level and concession stands. The event center box office and administrative offices were completely revamped including the installation of granite countertops while upgrading the ceiling, floor and walls. Additionally, Nilsen had a new concrete staircase from the main parking lot installed, leading to a more decorative and aesthetically appealing entrance into the building. In terms of hockey additions, Nilsen has purchased a new electronic Zamboni with a state-of-the-art laser leveling system to enhance ice quality in addition to a new skate sharpener, a skate profiler and an industrial sewing machine for the Firebirds.

All the above improvements have made it possible for the Flint Firebirds to draft and recruit the best players available. Also, the arena now can bring several family entertainment shows and exhibitions to the Dort Financial Center. Just like the City of Flint, the Dort Financial Center is rebuilding itself and people from outside Flint and Genesee County are taking notice.

As the facility improves, the Flint Firebirds have improved as well. Mr. Nilsen was very happy to see his team compete in the 2017 OHL Playoffs and is looking forward to watching the team continue to improve throughout the 2017-18 Season.

“Although we lost some very good players, our scouting staff has had two very good Priority Selection Drafts,” said Nilsen. “We now are building our team through the draft and I am very confident in our Head Coach Ryan Oulahen and his staff that they will continue the great job they have done to develop our players.”

As the Flint Firebirds move into their third year, Mr. Nilsen wants to continue his pledge to support the community and the local non-profit organizations. To date, the Firebirds have raised more than $200,000 for charities in just their first two seasons in Flint.

“People are supporting the Firebirds which I really appreciate and we will do everything we can do to support them and give back to our community,” Nilsen added.

Because of Rolf Nilsen, the City of Flint and Genesee County have an internationally competitive team in a premiere league that we can call ours. The Flint Firebirds.