Firebirds improve to 3-0 with Friday victory in Saginaw 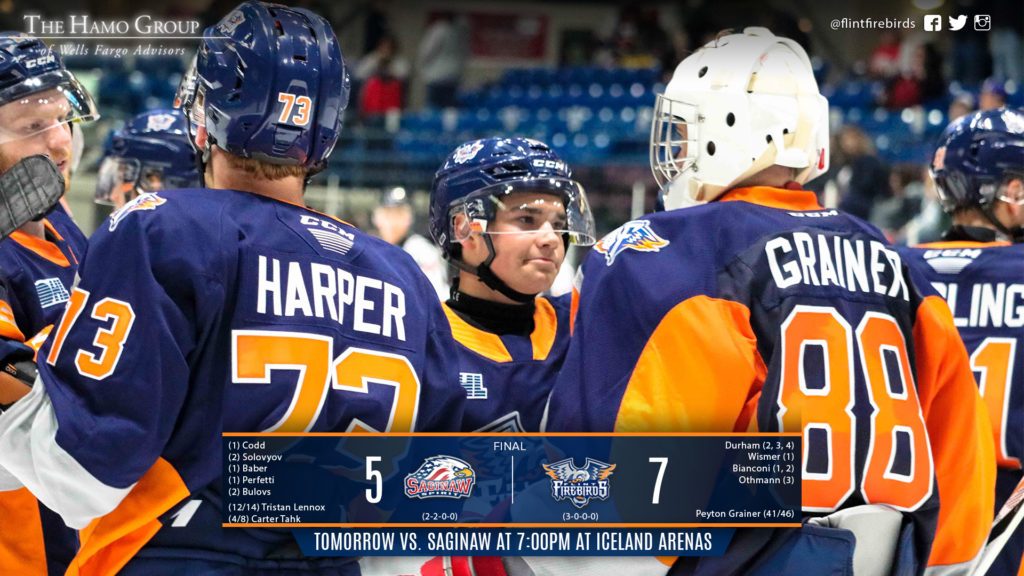 Saginaw, Mich. – Flint scored three-unanswered goals in the third period to rally for a 7-5 victory over the Saginaw Spirit Friday to improve to 3-0. Jake Durham recorded a hat-trick, Evgeniy Oksentyuk tallied three assists, Michael Bianconi scored twice, including the game-winner, and goaltender Peyton Grainer recorded 41 saves for his first victory in his first-career OHL preseason game.

Saginaw was first to strike 11:15 into the first period when David Codd fired a one-timer under the right pad of Grainer from the left circle. Assists were credited to Mitchell Smith and Josh Bloom. Then, while on the power-play, Ilya Solovyov converted on a one-timer from the point, gloveside, with 8:00 remaining. Mitchell Smith earned his second assist of the night and Cole Perfetti pick up the second assist on the play.

Jake Durham scored his first-of-three on the night 5:02 into the middle period. Jack Phibbs made a skilled flip-pass up the right-wing wall to spring Durham for a breakaway. Durham scored on a backhand shot over the right shoulder of Tristan Lennox.

Saginaw’s Camaryn Baber would regain the two-goal lead for Saginaw just 1:07 later, finding a loose puck in front of the net and banging it past Grainer.

Durham scored his second of the night for Flint with 2:46 remaining in the middle frame, poking the puck off Lennox’s stick and into the net. Phibbs earned his second assist on the evening.

Perfetti tallied his first of the preseason 12 seconds later on a skilled play in the Firebirds’ zone. Katic backhanded the puck from the right corner to Connor Punnett at the right circle, who quickly one-touched it backdoor to Perfetti for the goal.

Flint would score the next two goals. First, Durham secured the hat-trick at 3:33 of the final period by whacking the puck out of mid-air. Braeden Kressler earned the primary assist. Then, 1:09 later, Jack Wismer pounced on a loose puck in the crease to tie the contest for the first time of the evening. It was 4-4. Evgeniy Oksentyuk and Jack Harper tallied the helpers.

Sebastian Bulovs would score Saginaw’s final goal of the night on a one-timer from the slot, gloveside, with 12:28 remaining.

The Firebirds rallied for three unanswered goals. Michael Bianconi scored back-to-back lamp-lighters from the point to initially tie the game 5-5. Zacharie Giroux earned his first OHL preseason point on the play. Then Bianconi’s second goal was the eventual game-winning tally with 3:13 remaining in the contest. Oksentyuk notched back-to-back assists for his third point of the game.

Finally, Brennan Othmann scored on an empty net to add the insurance goal and secure the game with eight seconds remaining.

Next up for Flint, the Firebirds will host their in-state rival, the Saginaw Spirit, in the Firebirds’ only home exhibition game of the 2019 Pre-Season this Saturday, September 14th. Game time is set for 7 p.m. at the Firebirds’ official practice facility, Flint Iceland Arenas on Elms Rd. in Clayton Township. Tickets are free for all Firebirds’ season ticket holders. Parking is free for all fans. General admission seating is $10 and can be purchased in advance at the Dort Federal Event Center Box Office or at Iceland Arena’s. Flint’s regular season home opening night is on Saturday, Sep. 28 when the club hosts the Niagara IceDogs at the Dort Federal Credit Union Event Center.