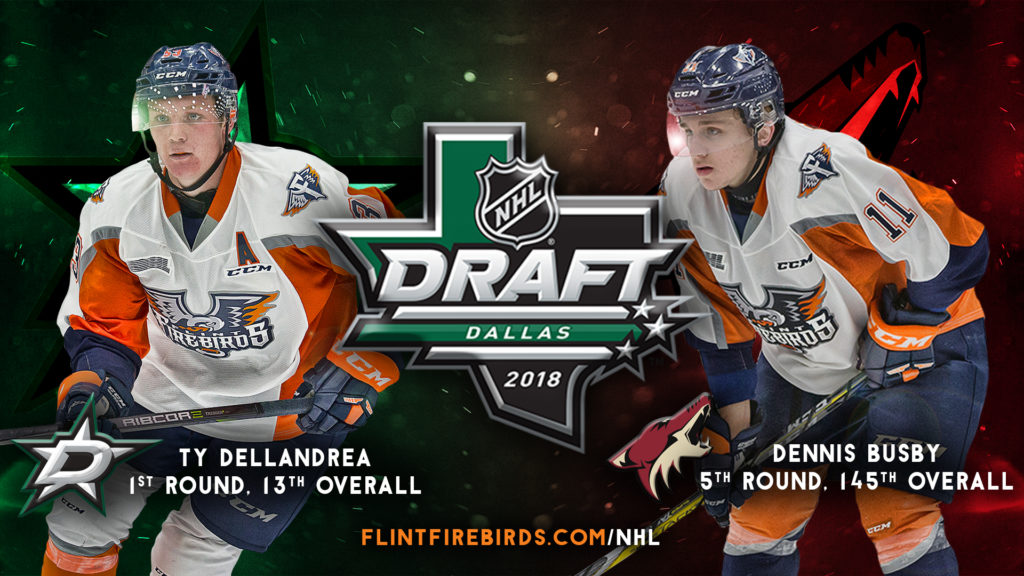 Dallas, Texas –  Ty Dellandrea and Dennis Busby made history this weekend as the two were the first players that were originally drafted by the Flint Firebirds and were then drafted into the National Hockey League. Dellandrea was selected in the first round (13th overall) by the Dallas Stars and Dennis Busby was tabbed in the fifth round (145th overall) by the Arizona Coyotes.

Dellandrea, a six-foot, 190-pound forward from Port Perry, Ont., totaled 59 points (27G, 32A) in 67 games during the 2017-18 regular season in the Ontario Hockey League (OHL). After being selected by the Firebirds in the first-round, fifth overall, of the 2016 OHL Priority Selection, Dellandrea was named an assistant captain in his second season in Flint. He recorded five game-winning goals and 14 multi-point games during the 2017-18 campaign, including a five-point (3G, 2A) night on Dec. 16, 2017.

Dellandrea was also recognized as the Flint Firebirds Most Valuable Player (MVP) and winner for the Combined Academic & Athletics Excellence award for the 2017-18 season. He achieved a perfect 4.0 grade point average (GPA) at Grand Blanc High School in Michigan during his senior year.

Despite not every eligible Firebird for the NHL Draft heard their names called this weekend, more Flint Firebirds will be invited to NHL Development Camps that will be announced in the coming week.

78 CHL players were selected in the seven rounds of the 2018 NHL Draft held this weekend at American Airlines Center representing over 35% of all 217 players picked by all 31 NHL clubs. The 78 CHL players includes 13 selected in the first round with four picks in the top-10 led by Andrei Svechnikov of the Barrie Colts chosen second overall by the Carolina Hurricanes. Of the 78 CHL players selected, the Ontario Hockey League leads the way with 35 players, followed by 23 players from the Quebec Major Junior Hockey League, and 20 players from the Western Hockey League.

For the past five seasons, the OHL has sent more players to the NHL than any other league in the world. The OHL leads in total players selected in the NHL Draft (199), first and second round selections combined (76), defenseman (66) and forwards (122). On NHL opening day rosters in October, one-in-four players (26.4%) competing in the NHL were alums of the OHL, which is the highest percentage in the world. (See Info Graphic Here)

122 of the organization’s alums dating back to the Plymouth Whalers have been drafted in the NHL, now including 18 first-round picks.

At least one player with Flint or Plymouth ties has been selected in the NHL Draft for the past 28 consecutive years dating back to 1991.

The Firebirds’ training camp will take place Monday, Aug. 27 through Wednesday, Aug. 29. The camp will be held at the Firebirds’ official practice facility, Iceland Arenas, and is open to the public with free admission for all on-ice sessions.