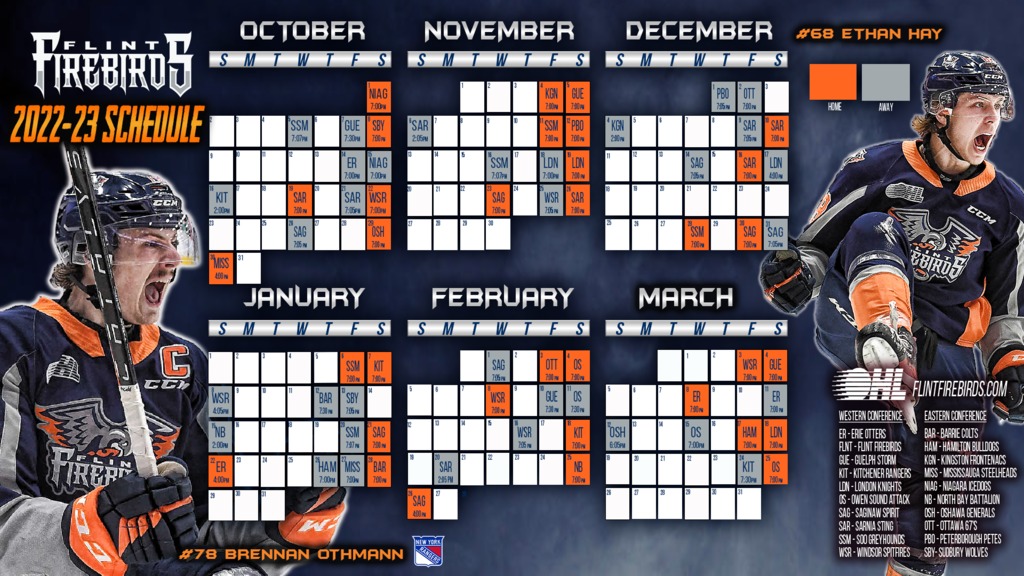 Flint, Mich. – Two days after the home opener for the Flint Firebirds was announced for Saturday, October 1 at 7:00 p.m., the full 68-game schedule has officially been released.

Additionally, Suite Rentals are available now for the home opener and Group Tickets can be pre-ordered by either calling the Dort Financial Center Box Office or by emailing Dominic Gutierrez at domg@flintfirebirds.com. Single-game tickets will go on sale at a later time.

About The Flint Firebirds:
The Flint Firebirds are a proud member of the prestigious 20-team Ontario Hockey League. The OHL is one of three leagues that constitute the 60-team Canadian Hockey League (CHL), which is known as the world’s premier player development league for the NHL. On NHL opening-day rosters in October, 70% of NHL players were CHL alums. Since the Firebirds’ inception in Flint, Michigan five seasons ago, the team has produced 22 NHL-signed or drafted players. More than 250 scouts representing all 31 NHL clubs attended a Firebirds game in Flint during the 2019-20 season. The Firebirds average nearly 3,000 fans per game at the newly renovated Dort Financial Center, reaching over 100,000 fans each OHL season.