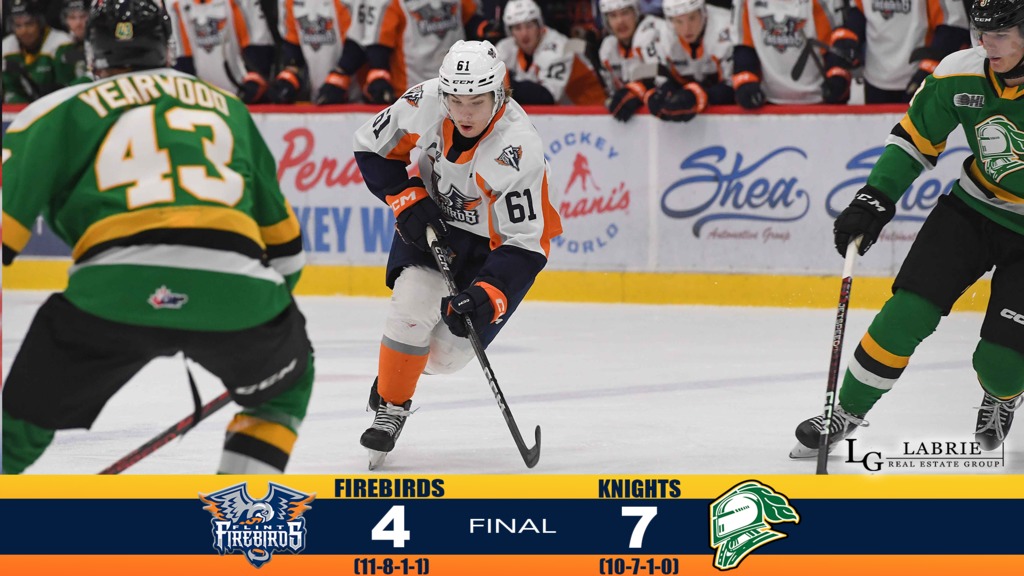 Flint, Mich. – The London Knights evened the two-game weekend series with a 7-4 victory at the Dort Financial Center in Flint Saturday. Tyler Deline scored twice for the Birds, his first career two-goal OHL game. Coulson Pitre also added a pair of assists for the home team. Will Cranley (St. Louis Blues) started in net for his 17th appearance and turned aside 25 of the 31 shots faced. Rookie netminder Zach Bowen backstopped the Knights in his sixth appearance of the campaign, making 24 saves to earn his third win.

It was the Knights who found the back of the net first. Max McCue (San Jose Sharks) carried up the right-wing side with a defender draped all over him. He was knocked off the puck when he tried to cut to the net. The puck sprung free to Cranley’s left, where George Diaco attempted a shot. He, too, was knocked off the puck and this time the loose puck slipped into the crease. Overager Sean McGurn wound up and fired it behind Cranley, low to the glove side for his eighth of the season at 14:55.

While skating 5-on-4, Braeden Kressler (Toronto Maple Leafs) won an offensive drawback to Gavin Hayes (Chicago Blackhawks) at the right-wing half boards. Hayes quickly fed Tyler Deline at the near point, and the veteran defender took a couple of strides toward the top of the circle before slapping a shot into traffic that found the top corner, blocker side. The power-play tally was Deline’s third goal of the campaign, logged at 18:14.

The first period ended in a tie. Shots were even at nine per side. Faceoffs favored the Firebirds 17-7. On the power play, the Birds went 1-for-2 and the Knights were scoreless in two chances.

Early in the middle frame, Jackson Edward (Boston Bruins) snapped a shot from the top of the left circle. As Cranley dropped into the butterfly to stop the low shot, George Diaco deflected it high from the slot for his 11th of the season, assisted by Edward and Oliver Bonk.

The Knights extended their lead to a pair just beyond the halfway point of the second period with a power-play marker at 10:14. Isaiah George (New York Islanders) faked a shot from the top of the left circle, instead sending a slap-pass across the slot to McCue for the backdoor one-timer, resulting in his fifth of the campaign.

The Birds answered less than a minute later off a solid individual effort by Coulson Pitre. As he carried between the circles, the London defender dove to block his shot. Pitre showed patience and waited until the rearguard slid out of his way before sniping a wrist shot glove side for his eighth of the season at 11:09. Luca D’Amato picked up the assist on the tally.

After the referees sorted out a late scrum situation, London was granted a 5-on-3, with one extra two-minute minor and a five-minute major. The Knights scored twice, first with two extra men on the ice, then with one during the balance of the major. Landon Sim (St. Louis Blues) potted the first one with a redirection in front, ending the first Flint penalty at 18:53 with his sixth of the season. McGurn and Diaco combined for the assists. Oliver Bonk scored the second with a one-timer from the top of the left circle at 19:27 to give London a 5-2 advantage before the second intermission. Denver Barkey and Diaco picked up the helpers.

The Knights logged their sixth tally at 4:30 of period three off a second rebound chance from the bottom of the left-wing circle. Ethan MacKinnon lifted the puck over the pads of the outstretched netminder for his second of the season, with assists from Ryan Del Monte and McCue.

Coulson Pitre fed Tyler Deline from the right of Bowen for Deline’s second of the night and fourth of the year at 11:00 of the third, pulling the Firebirds within three goals. Three minutes later, Riley Piercey carried to the top of the left circle and his seeing-eye shot made its way under Bowen’s blocker but above the pad for his ninth of the season. The goal was unassisted and recorded at 14:04.

Flint called Cranley to the net with two minutes remaining, only down by a pair. It would be the Knights, however, that scored the final tally of the contest, finding the empty net from their own end of the ice. The final score was 7-4, with the Knights also outshooting the 32-28 across the 60 minutes. Flint controlled the majority of the faceoffs by a margin of 41-27. London finished 3-for-6 on the power play while limiting the Firebirds to 1-for-2.

Next Up: The Firebirds host their in-state rival the Saginaw Spirit Wednesday for Game 2 of the I-75 Divide Cup, presented by Coors Light. Puck drop is set for 7:00 p.m. (ET), and great seats are still available from ETIX HERE.