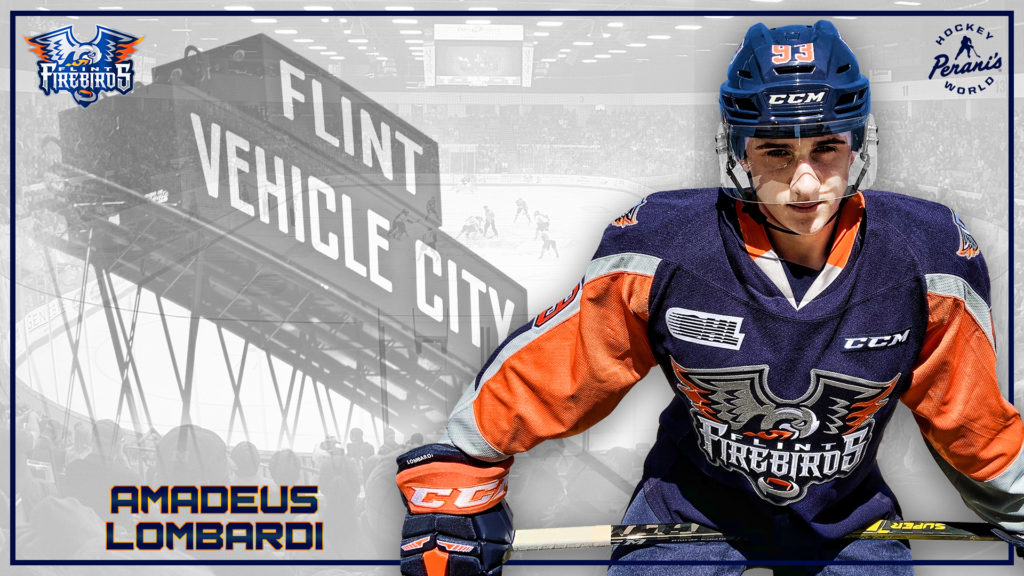 “We are excited to have Amadeus and his family committed to the Flint Firebirds’ organization,” said Flint Firebirds Vice President of Hockey Operations and General Manager Barclay Branch. “Amadeus brings speed, skill and a strong work ethic to our lineup. He will play a significant role with our club moving forward.”

Lombardi, a native of Aurora, Ont., recorded an impressive 95 points (36G, 59A) in 72 games this season with the Toronto Titans Midget AAA Hockey Club in the Greater Toronto Hockey League (GTHL). He played a key role in leading the Titans to a 24-7-2 first-place finish and the GTHL Regular Season Championship, now known as the Pro Hockey Life Cup. Additionally, Lombardi helped the Titans capture the 5th-Annual Vaughan Kings Classic, finishing first among all skaters in the tournament with 14 points (5G, 9A) in just seven games.

“It’s an amazing feeling to be a Firebird,” said Lombardi. “Ever since I was drafted by Flint, it has been my goal to sign with the Firebirds. It’s such a great organization there that I’m really excited to play for. They have a great staff. When I went to both camps, everyone was so nice and welcoming and they treat their players top notch. I’m really happy.”

The 5-foot-10, 155-pound skater played in six Junior A games this past season with the Toronto Jr. Canadiens in the Ontario Junior Hockey League (OJHL). Lombardi was also awarded the OJHL’s ‘All-Star Affiliates’ game’ Most Valuable Player (MVP), after recording four points (1G, 3A) in one contest.

He was originally selected by the Firebirds in the 13th-round (244th overall) of the 2019 OHL Priority Selection, after tallying 48 points (19G, 29A) in 58 games with the Toronto Titans Minor Midget AAA Hockey Club (GTHL).

Lombardi will wear number 93 for the Firebirds.