“We are thrilled to be adding veteran experience to our lineup,” said Flint Firebirds Vice President of Hockey Operations and General Manager Barclay Branch. “Anthony is a proven winner, with championship experience and his veteran leadership will be a significant addition to our club moving forward.” 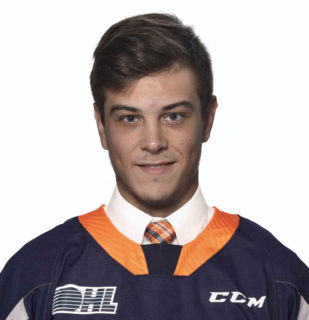 Popovich, 20, has spent the last three seasons with Guelph, most recently backstopping the Storm through the longest season of any team in the OHL, winning four consecutive best-of-seven playoff series en-route to capturing the Wayne Gretzky Trophy as the Western Conference playoff champions and the J. Ross Robertson Cup as the OHL Finals playoff champions. Popovich also earned veteran experience as he was the starting goaltender for Guelph as the OHL representative in the prestigious CHL Memorial Cup tournament, which is the main championship trophy of the three league Canadian Hockey League.

“From what I have heard from my friends that have played in Flint, is that they treat their guys like pros. I’ve only heard good things about the billets (host families) and that everything is ran first-class in Flint,” said Popovich. “I heard there’s a good group of guys there to go far this year and surprise a lot of people. I think they’re going to have a special group this year.”

In the regular season, Popovich posted an impressive 3.29 goals against average (GAA) and a .899 save percentage (SAV%) in 52 of 68 OHL regular season games with the storm last year. Popovich was originally selected by Guelph in the seventh-round (134th overall) of the 2015 OHL Draft prior to being named the Storm’s Most Improved Player after the 2017-18 OHL season.

Popovich will arrive in Flint this week and will wear number 32 for the Firebirds this season.