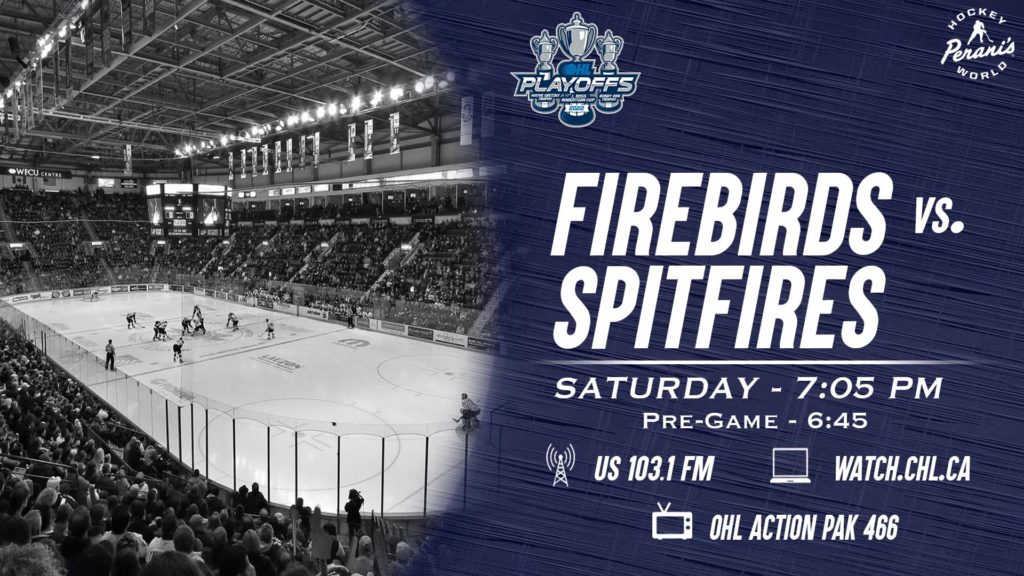 Windsor, Ont. – The Firebirds’ record-setting campaign continues. They’ll face a familiar foe in the third round beginning Saturday, as the Windsor Spitfires have reached the Conference Finals for the first time since 2011. Games 1 and 2 will be played in Windsor. Puck drop for Game 1 is set for 7:05 p.m. (ET) Saturday at the WFCU Centre.

Flint entered the 2022 playoffs ranked third in the Western Conference and second in the West Division with a regular-season record of 42-21-1-4. The Spitfires made a huge push in the final 15 games, winning 13 in a row and picking up points in 14 of the 15. They ended up winning both the West Division and the Western Conference. Windsor finished the regular season with a 44-17-4-3 record. On the road this year, Flint posted the OHL’s best record of 24-7-1-2. The Spits’ final home record was 25-7-1-1, which was the second-best in the league. All time, the Firebirds carry a regular-season record of 13-22-1-1 versus Windsor with a road record of 4-13-1-1.

In the 2021-22 regular season, these clubs battled a total of eight times. Windsor won seven of the eight. Flint’s lone victory in the series was back on February 19 at the WFCU Center in a shootout. In total, the Spitfires outscored the Firebirds 46-25. Through two rounds of playoffs, the Birds defeated the Owen Sound Attack in seven games followed by the Sault Ste. Marie Greyhounds in five. Windsor defeated the Sarnia Sting in six games in Round 1 and then eliminated the Kitchener Rangers in five meetings.

In the eight-game series during the regular season, Wyatt Johnston earned the most points from either side with 18 points (6 G, 12 A). Tied for second for Windsor are Matthew Maggio (7 G, 7 A) and Will Cuylle (7 G, 7 A) with 14 points each. Brennan Othmann (New York Rangers) topped the stats for Flint with seven goals and five helpers. Tag Bertuzzi and Sahil Panwar were tied for second with six points each. Bertuzzi scored four times and assisted on two tallies and Panwar assisted on six markers.

On special teams, the Firebirds finished the 68-game campaign with the OHL’s top-ranked penalty kill (PK), finding success 84.2% of the time. In playoff games so far, they rank fifth with an 83.3% efficiency. The Spits ranked second on the PK at 82.6% during the regular campaign, and are now seventh with a 78.0% kill rate in the postseason. Flint ranked 12th in the regular season with the man-advantage, scoring on 19.7% of their chances. Windsor scored 26.1% of the time when they had a power play, ranking third. Now, through two playoff rounds, the Birds rank ninth at 20.0% and Windsor ranks 12th with a 13.3% scoring rate.

Through 12 playoff games to date, Flint’s led by Brennan Othmann (New York Rangers) with eight goals and nine assists for 17 points. Othmann led his troops with 50 goals and 97 total points in the regular season. He’s currently ranked fifth in goals and total points and tied for eighth in assists. Amadeus Lombardi is tied for second in the postseason with four goals and six assists. Lombardi also finished second in the regular season, with 59 points (18 G, 41 A) in 67 games. Gavin Hayes is tied with Lombardi with 10 points, also stemming from four goals and six helpers. Hayes hails from Westland, Mich. and finished the regular season with new records for assists (30) and points (49) by a rookie in Flint’s franchise history. Out of all rookies in the postseason thus far, Hayes ranks second in points, is tied for second in assists, and is tied for fourth in goals-scored.

Coulson Pitre led the team’s freshman class in goals (23) this season and had 44 total points through 52 contests. He is the club’s all-time rookie goal-scoring leader, and he ranks second in the OHL for rookie goal-scoring currently with six markers. He also sits tied for fourth in total points with eight. Defensemen Dmitry Kuzmin (Winnipeg Jets) tops the rearguards with eight total playoff points, all of which are assists. Fellow blue-liner Tyler Deline has a goal and five helpers to rank second on the club.

Luke Cavallin started these playoffs with the league’s seventh-best goals-against average (GAA) of 3.16 and the league’s third-best save percentage (SV%) at .910 through 56 appearances. He earned the most wins in the league and the most in Flint history, ending at 36 victories during the campaign. Cavallin now has eight victories in 12 playoff games. He carries the fourth-best GAA of 2.40 GAA and the OHL’s best postseason SV% of .934. Behind Cavallin are two rookie goalies. Ian Michelone appeared in ten regular-season games and picked up four victories. He carries a GAA of 4.37 and a SV% of .884. Michelone was one of only two goalies in the league to earn a shutout this season. Nathaniel Day has two victories in eight regular-season appearances, with a 3.63 GAA and a .883 SV%.

The Spitfires are led by Wyatt Johnston (Dallas Stars), who was recently named the ‘OHL Player of the Week.’ He also received the William Hanley Trophy, awarded each season as the OHL’s most sportsmanlike player, and the Eddie Powers Memorial Trophy for logging the most points in the regular season (124). Through 11 playoff games this year, he’s scored eight times and assisted on 23 tallies for 23 total points. He ranks first in the postseason for assists and points, is tied for first with a +16 rating, and is tied for fifth in goal scoring. He topped the OHL in points in the regular season with New York Rangers’ prospect Will Cuylle is second on the club with 14 points (6 G, 8 A), and he’s also tied for first in the league with a +/- rating of +16. Third-year winger Alex Christopoulos and defenseman Andrew Perrott are tied for third with eight playoff points each. Christopoulos has six goals and two assists while Perrot has five goals and three helpers.

Rookie Ryan Abraham, who hails from Livonia, Mich., is the top-scoring rookie on the squad with seven total points (1 G, 6 A). Louka Henault is second in scoring from the blue line with three goals and three assists.

Goaltender Mathias Onuska started his season with the London Knights before joining the Spitfires. He appeared in 26 regular-season season games for Spits, earning 19 victories with a 3.34 goals-against average (GAA) and a save percentage (SV%) of .882. He’s played all 11 playoff games for the club to date, winning eight while posting the league’s third-best postseason GAA of 2.26 and a SV% of .910. Detroit, Mich. native Xavier Medina played in 30 regular-season contests for Windsor this season, picking up 18 wins for the team. He posted a 3.05 GAA and a .891 SV%.

Saturday’s contest against the Windsor Spitfires can be heard live on the radio throughout Flint & Mid-Michigan on US 103.1 FM, online at www.us103.com, or by downloading the US 103 app here. Jack Sznewajs will call the play-by-play action on the Firebirds Hockey Network (FHN). Pregame coverage will begin prior to puck drop at 6:45 p.m. (ET) Saturday evening.

Also, all Flint Firebirds’ home and away games throughout the 2021-22 regular season can be watched anywhere in the world online on https://watch.chl.ca/ohl. CHL TV is the league’s new and improved video streaming platform that delivers high-quality live and on-demand coverage of all regular season and playoff games annually. The cost is