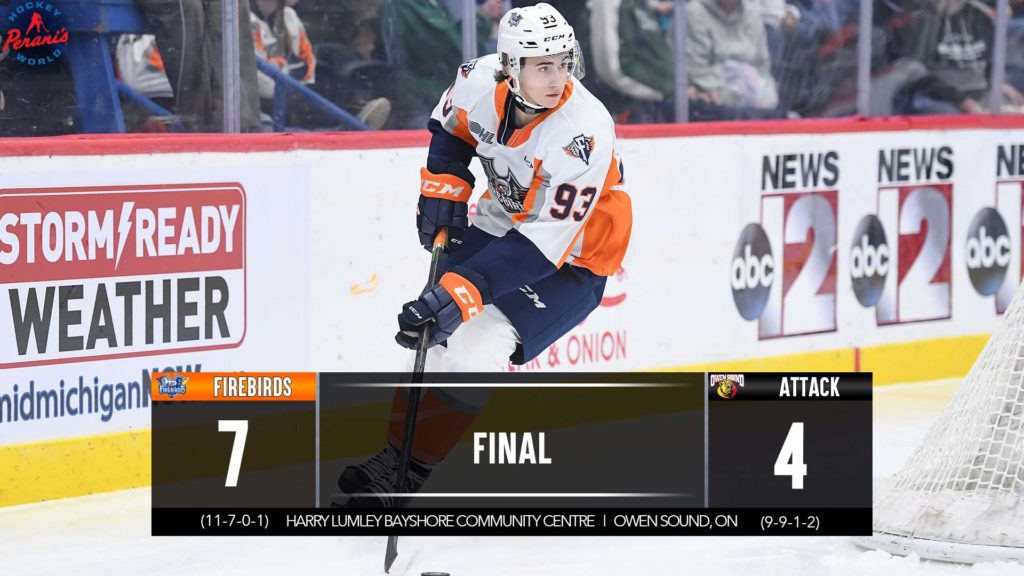 Owen Sound, Ont. – The Firebirds first meeting with the Attack in Owen Sound resulted in a 7-4 victory for the home team. Ian Michelone made his fourth start in goal, fresh off his first career OHL shutout in Saginaw. In the contest in Owen Sound, Michelone made 31 saves on 35 shots for his third victory. Amadeus Lombardi scored twice and added an assist to pick up “First Star” honors in the game. Riley Piercey scored twice and Coulson Pitre netted a goal and picked up two helpers for a three-point night en route to being named the game’s “Third Star.” The Attack were led on the scoresheet by Cedrick Guindon and Julian Fantino, with a goal and an assist each.

The first period was a chippy affair, with both teams playing a physical brand of hockey. However, the Attack scored the lone goal of the opening 20 minutes. Cedricson Okitundu launched a hard wrist shot from the left point. Colby Barlow was positioned at the inner edge of the left-wing circle and found a way to redirect the shot past Michelone for his eighth of the campaign at 13:35.

Shots were virtually even through the opening frame, with Owen Sound having an 11-10 edge. Faceoffs were 9-8, advantage Attack. Both teams were unable to score on one power-play opportunity.

After a low-scoring first period, the second period saw increased action and five total goals scored. First, Coulson Pitre made a drop pass in his left offensive corner that was intercepted by an Owen Sound defender. Gavin Hayes picked the pocket of the defender and returned the puck to Pitre low in the left circle. Pitre lifted a deceptive wrister that found twine between Votary and the near post for his seventh of the season just 56 seconds into the middle frame.

Flint claimed their first lead of the night while shorthanded at the 7:28 mark. Pitre won a battle along the boards with two Attack defensemen and slid the puck between the circles to a streaking Brennan Othmann (New York Rangers). Othmann sniped a wrister up high for his 15th of the season.

Owen Sound took a couple of minor penalties close together and gave the Birds a lengthy five-on-three power-play opportunity. Flint was unable to convert, despite mustering several shots on Votary. Shortly after the power play expired, Owen Sound emerged on a two-on-one rush the other way. A late pass generated a quality shot on the net, but Michelone kicked it aside. The rebound found its way to Cedrick Guindon on the left-wing side, and he made a quick pass across the slot to William Portokalis on Michelone’s left for the back-door one-timer. The goal was Portokalis’ fifth of the season, assisted by Guindon and Nolan Seed, logged at 14:58.

Neither team was letting up on the pressure, and it was the Firebirds claiming a 3-2 lead with a power-play tally next at 16:25. Gavin Hayes made the setup pass from deep in the right corner to Tyler Deline, centered just inside the offensive blue line. Deline wound and fired, but Votary made a kick save that went to his left. Riley Piercey was in the right place to quickly redirect the rebound behind Votary for his fifth of the season.

Finally, Julian Fantino carried up the left-wing side on a two-on-one with Guindon to his right. Fantino made the late pass around the diving Flint defender that Guindon was able to one-time home for his fifth of the season, knotting the game at three with 1:23 remaining in the second period. Igor Chibrikov picked up the second helper.

Second-period shots were even at 13 per side. The Firebirds held a large lead in the faceoff circles by a 13-6 margin. On special teams, Flint scored once on three chances with the man-advantage, while holding the Attack scoreless with one opportunity.

Amadeus Lombardi potted his first of the night less than one minute into the third period. Pitre had the puck on the right-wing boards and centered to Lombardi for a one-timer up high over Votary’s left arm. Tyler Deline picked up the second assist on Lombardi’s sixth of the season, logged just 28 seconds into the final frame. Lombardi’s second of the night was scored at 8:47 to put the Birds up by a pair. Hayes took a wide-angle shot that was saved, but the rebound went right to Lombardi in the high slot for a quick one-timer into the back of the net. His second was assisted by Hayes and Tag Bertuzzi.

Flint took the three-goal lead just over a minute later, when Luca D’Amato carried the puck from his defensive end up the left side of the ice into the offensive zone. He made a move to shake the one defender in his path and shot far side. The Owen Sound netminder got a piece of the shot with his blocker, but the puck bounced through the five-hole to give D’Amato his third of the campaign, unassisted at 9:54.

The Attack cut the lead to two again when Portokalis carried into the zone and made a saucer pass over two Flint defender’s sticks. The pass connected with Lorenzo Bonaiuto to the left of Michelone. Bonaiuto passed across the slot to Deni Goure who one-time it behind the Flint netminder for his 11th at 10:34.

Owen Sound used their timeout with just north of two-and-a-half minutes remaining in regulation. They pulled Votary to the bench for the extra attacker at the 2:09 mark. The effort was to no avail, as Riley Piercey found paydirt again with 52 seconds remaining to seal the 7-4 victory. Ethan Hay and Amadeus Lombardi assisted on the tally.

Final shots ended 35-30 in Owen Sound’s favor. Flint won more faceoffs by a margin of 30-25. On special teams, the Birds finished one-for-six on the power play and held the Attack scoreless on four chances.