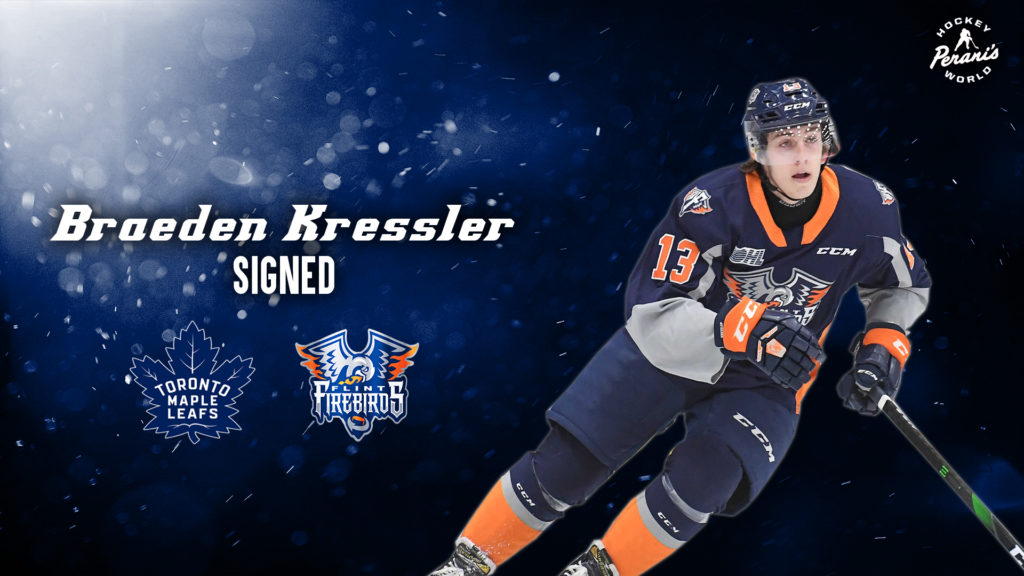 Flint, Mich. – The Toronto Maple Leafs announced today that the hockey club has signed Firebirds forward Braeden Kressler to a three-year entry-level contract through the 2023-24 season.

“We are very happy for Braeden,” President of Hockey Operations Terry Christensen said. “What he did at the Toronto training camp is very rare. To go in as a FA at his age and to receive an NHL contract is a testimony to his hard work and commitment to his game. We are excited that he will represent the Flint Firebirds this year, and we look forward to not only his talent but his leadership skills throughout the 2021-22 season.

Kressler, 18, posted 18 points (9G, 9A) in 46 games with the Flint Firebirds (OHL) during the 2019-20 campaign. The Kitchener, Ont. product ranked second among Flint’s rookies in goals, assists and points that season.

“It’s obviously a dream come true,” said Kressler. “They (Toronto) are such a top-class organization that is there to help you become the best player you can be. It still feels surreal and it’s an exciting moment that I will definitely never forget.”

The centreman skated in the 2019 World U-17 Hockey Challenge where he appeared in five games with Canada Red and recorded two assists during the tournament.

Kressler was selected by the Firebirds in the second round (28th overall) in the 2019 OHL Priority Selection.

About the Ontario Hockey League:
The Ontario Hockey League is a proud member of the Canadian Hockey League which is the world’s largest development hockey league with 60 teams in nine Canadian provinces and four American states. In addition to the OHL, the CHL is made up of the Quebec Major Junior Hockey League and the Western Hockey League. The CHL supplies more players to the National Hockey League and U SPO­­­RTS than any other league.
About The Flint Firebirds:
The Flint Firebirds are a proud member of the prestigious 20-team Ontario Hockey League. The OHL is one of three leagues that constitute the 60-team Canadian Hockey League (CHL), which is known as the world’s premiere player development league for the NHL. On NHL opening day rosters in October, 70% of NHL players were CHL alums. Since the Firebirds’ inception in Flint, Michigan five seasons ago, the team has produced 21 NHL signed or drafted players. More than 250 scouts representing all 31 NHL clubs attended a Firebirds game in Flint during the 2019-20 season. The Firebirds average nearly 3,000 fans per game at the newly renovated Dort Financial Center, reaching over 100,000 fans each OHL season.