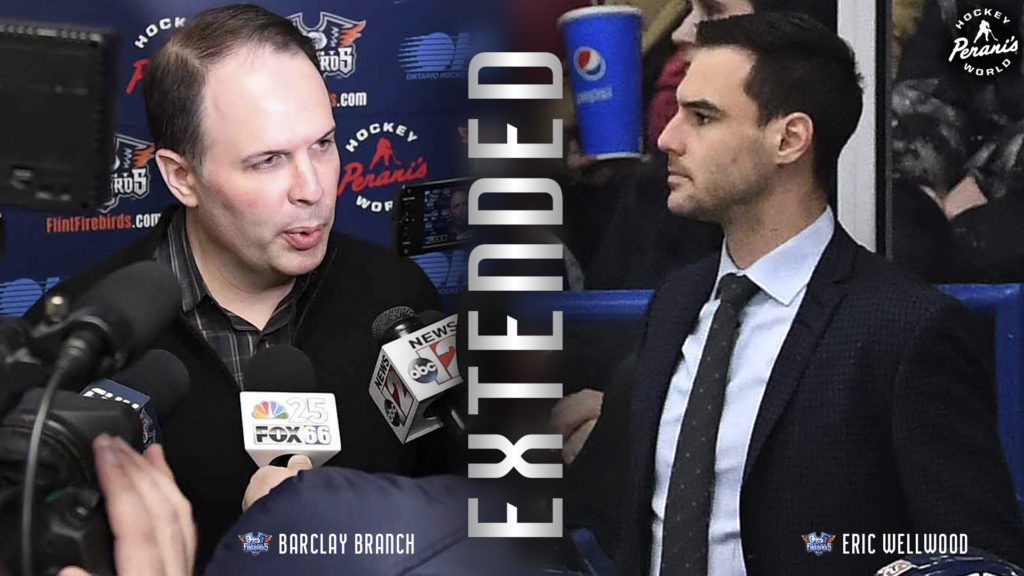 Signed through 2020-21; Firebirds in midst of winningest season in franchise history

The Flint Firebirds today announced that the club has agreed to terms on contract extensions with both Vice President of Hockey Operations & General Manager Barclay Branch and Head Coach Eric Wellwood through the 2020-21 OHL season.

The Firebirds are in the midst of their winningest-season in franchise history, recording their first-ever 40-win campaign to date.  Flint is coming off an impressive 15-game winning streak, 11 of which were road wins. The Firebirds recorded their best-start in history with a 10-3-0-0 record to begin the campaign and have since gone on to record the greatest number of points in a season (82), wins in a season (40), most home wins (20), most road wins (20), most goals-for in a season (273) and most goals-for in a game (12).

Branch, 44, is in his third season as vice president of hockey operations and general manager, Currently, the team is in a playoff-hosting position and is just five points out of the West Division lead, making Flint a playoff team and a legitimate OHL contender. The Oshawa, Ont. native was named Vice President of Hockey Operations & General Manager of the Firebirds on Apr. 17, 2017.

“I’m very pleased and grateful to remain a Firebird,” said Branch. “The franchise has come a long way since its inception, but we feel like there’s more work to do. It’s exciting to continue to work on the progress of making the Flint Firebirds a championship caliber organization moving forward.”

Wellwood, 30, is in his first full season as head coach after being named the bench boss on Oct. 18, 2019. Since then, Wellwood has become the Firebirds’ all-time winningest head coach in franchise history with 56 wins and counting. Wellwood brings a winning pedigree to Flint as he is among a special group that have won the CHL Memorial Cup three times, twice as a player and once as a coach.

Eric has now played a key-role in the two winningest-seasons in Firebirds’ history as he was the associate coach during the 2016-17 campaign when the team recorded 32 wins and made their first playoff appearance. After being selected in the sixth-round of the 2009 NHL Draft, the Windsor, Ont. native recorded five goals and five assists in 31 NHL games with the Philadelphia Flyers from 2010-13 before sustaining a career-ending injury.

“I’m very appreciative of the opportunity to continue coaching this team,” said Wellwood. “The community and our fan base here have been great. I’m happy with the steps we’ve taken as a team and I look forward to working with our staff to continue to help our players improve each day.”