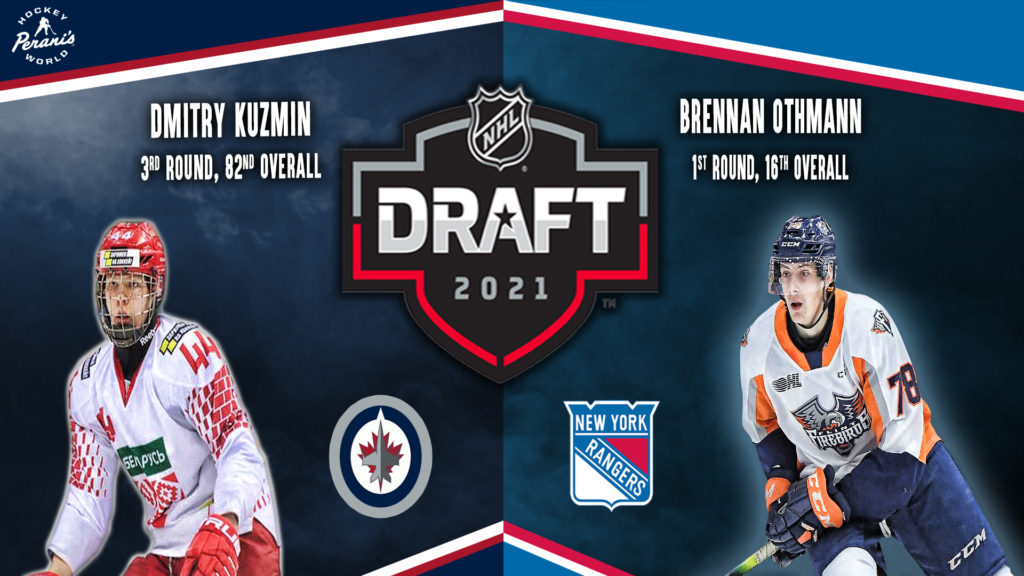 Flint, Mich. – It was a memorable Friday night for Brennan Othmann and his family as the New York Rangers selected the Firebirds forward in the first round (#16 overall) of the 2021 NHL Draft.

“It was a little nerve-racking because you don’t know when or if your name will be called,” Othmann said. “Once the Rangers said my name it was a feeling that I can’t describe.”

“We were crossing our fingers as the draft went on,” New York Rangers General Manager Chris Drury said. “We are excited to get him (Othmann) where we did. He’s a swiss army knife kind of player and he understands how to play the 200-foot game. We are excited to bring him into the mix.”

Othmann was the 2nd overall pick in the 2019 OHL Priority Selection draft of the Firebirds. He becomes just the second Firebird in franchise history to be drafted in the 1st round of the NHL Draft (Ty Dellandrea, 2018). There has now been a Flint Firebird drafted in every NHL Draft during their franchise history (since 2016).
“I know working hard doesn’t stop now,” Othmann said. “I know I have to keep climbing a mountain and prove myself to earn a spot eventually. But I’m excited and I can’t wait to take a bite out of the Big Apple with the best fans in the world.”

Meanwhile, Firebirds commit Dmitry Kuzmin has not yet suited up for the Firebirds, but the beginning of his NHL career is here. The Winnipeg Jets selected the left-handed defenseman out of Kholstovo, Belarus with their 3rd round pick (#82 overall) in the 2021 NHL Draft on Saturday.

“I am so excited and thankful to have been drafted by the Winnipeg Jets,” Kuzmin said. “I look forward to meeting everyone from the Jets organization.”

“Real skilled defenseman,” Winnipeg Jets General Manager Kevin Cheveldayoff said. “Pretty talented with good hands and sees the ice well. He has a pro-style body along with the skill. (We are) excited to see him play over here (in North America).”

The 18-year-old Kuzmin spent last season playing pro hockey in his native country of Belarus after committing to the Firebirds amid the COVID-19 pandemic. As a 17-year-old, he produced 12 Pts (3 G, 9 A) in 46 GP for Dinamo-Molodechno. He also added 5 Pts (1 G, 4A) in 5 GP for Team Belarus at the 2021 U18 World Junior Championships, scoring via the lacrosse move in a game.

“We joked about the lacrosse-style goal,” Cheveldayoff said. “I asked him how many times he’s done it outside of the U18s and he told me three times.”

“We are really excited for the players and their families,” President of Hockey Operations Terry Christensen said. “There is a lot of sacrifice for everyone involved. The players work so hard to reach this goal in life and the parents are there every step of the way. So we are thrilled to see them all be able to share and celebrate this moment.”