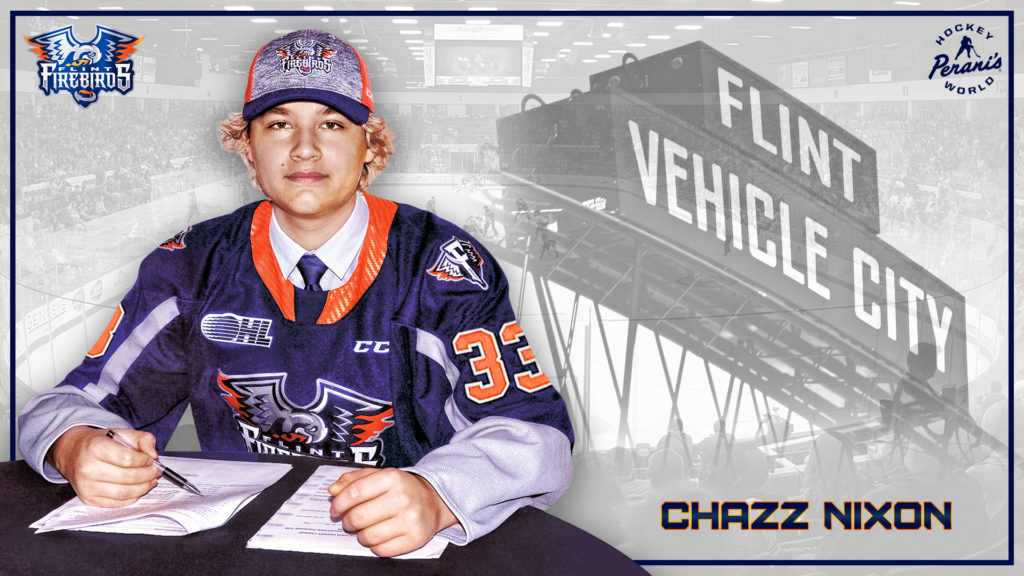 “We are happy that Chazz and his family have committed to the Firebirds organization,” said Flint Firebirds Vice President of Hockey Operations and General Manager Barclay Branch. “Chazz has impressive credentials and is a proven competitor that gives his team a chance to win every time he is in net. We look forward to having him in the Firebirds’ system moving forward.”

Nixon, a native of Oshawa, Ont., was selected by the Firebirds in the fifth-round (96th overall) of the 2020 OHL Priority Selection and becomes the third player from this year’s draft to commit to Flint. He finished second among all goaltenders in the Ontario Minor Hockey Association-Eastern Triple-A League (OMHA-ETA) this past season, recording a 1.99 goals against average (GAA) and three shutouts (SO) in 20 games, including an OMHA Playoffs Silver Medal, with the Oshawa Generals Minor Midget AAA Hockey Club.

“Growing up in Oshawa and watching the OHL on TV, I’ve always wanted to play in the league,” said Nixon. “I know how special of a league this is and I’m excited that I’ll get to continue my career with a first-class organization in Flint.”

The 6-foot-2, 195-pound netminder has spent seven of the last eight years with the Generals and has impressively been named as co-winner of Oshawa’s ‘Dutchy Turner Award’ four of the last five years: 2015-16, 2017-18, 2018-19 and 2019-20. The Dutchy Turner Award is presented to the Oshawa Minor Generals goaltender duo with the lowest GAA on the season.

Nixon also recorded a 2.00 GAA during the 2018-19 season with the Generals, helping his team capture the Eastern Triple-A League Playoff Championship.

He was the first player selected out of the Oshawa Minor Generals organization in the Firebirds’ six-year history at the OHL Draft. He will wear number 33 for the Firebirds.