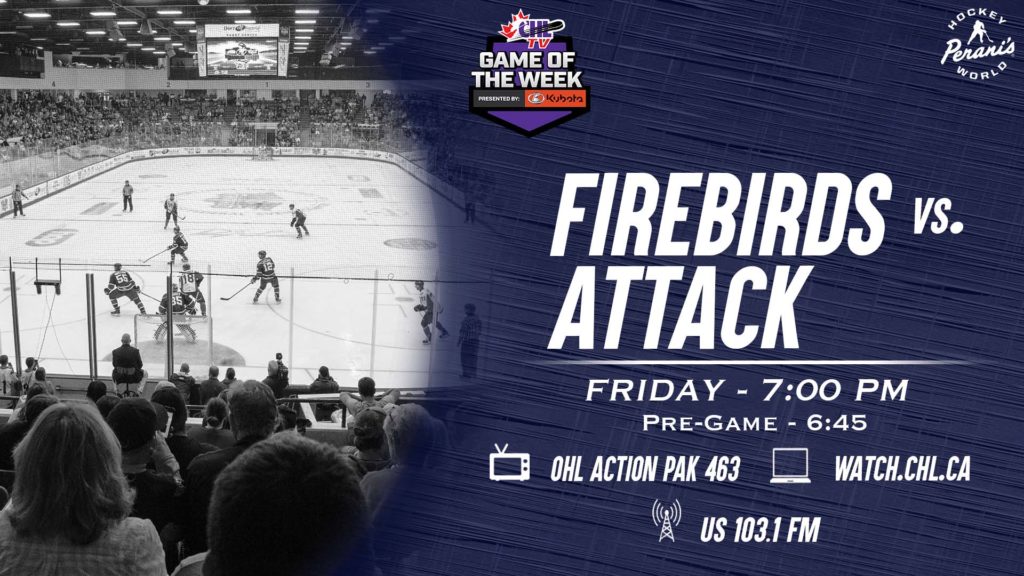 Flint, Mich. – The Firebirds are set to play back-to-back home games versus the Owen Sound Attack on Friday and Saturday nights. First up is the annual Teddy Bear Toss game Friday. Puck drop is set for 7:00 p.m. (ET) at the Dort Financial Center in Flint. It is also the CHL Game of the Week meaning it is FREE to watch for everyone on CHL TV HERE.

These teams played back-to-back games in Owen Sound, Ont. last week, and each team picked up two points. On Saturday, the Birds skated to a 7-4 victory. Ian Michelone made 31 saves on 35 shots for his third victory in just his fourth start. Amadeus Lombardi scored twice and added an assist to pick up “First Star” honors in the game. Riley Piercey scored twice and Coulson Pitre netted a goal and picked up two helpers for a three-point night en route to being named the game’s “Third Star.” The Attack were led on the scoresheet by Cedrick Guindon and Julian Fantino, with a goal and an assist each.

On Sunday afternoon, the Attack evened the score with a 3-2 triumph over the Birds. Colby Barlow scored twice for the home team after William Portokalis lit the lamp first in the contest. For the Firebirds, Riley Piercey and Coulson Pitre had the markers for the ‘Birds. Between the pipes, Ian Michelone made his second-consecutive start and stopped 37 of 40 shots faced. Across the ice, Nick Chenard picked up the victory with 32 saves on 34 shots faced.

In the two regular-season meetings between these clubs this season, Coulson Pitre has the most points for Flint, and William Portokalis has the most of Owen Sound, each with two goals and two assists in two games. The Firebirds’ Riley Piercey and the Attack’s Colby Barlow each have three goals against the other club. Amadeus Lombardi (2 G, 1 A) and Cedrick Guindon (1 G, 2 A) also have three points in two games versus one another.

The Firebirds enter Friday’s contest in second place in the West Division with a record of 12-8-0-1. Flint is four points behind the Soo Greyhounds and have played three fewer games to date. The Attack currently rank third in the Midwest, with a 10-10-1-2 record. On home ice this year, the Firebirds have gone 6-6-0-0 compared to Owen Sound’s road record of 3-6-1-1. Against Midwest Division opponents this season, Flint’s record sits at 9-3-0-1.

All-time, Flint carries a record of 7-15-0-0 against Owen Sound, with a home record of 4-6-0-0. In the shortened 2019-20 season, each team won two of the four meetings. Friday marks the third of four total meetings between the clubs, and the first of two games to be played in Flint.

On special teams, Flint now ranks 13th on the power play, converting at an 18.5% rate. The Attack rank 15th, scoring at a 16.8% clip. The Birds continue to hold the league’s best penalty kill (PK), holding their opposition scoreless 88.3% of the time. Flint has killed 18 penalties in a row dating back to November 24. In eight of the past 10 games, Flint’s PK has operated at 100% efficiency. Owen Sound’s PK ranks 13th with a 77% success rate.

Promotions: Friday night is the annual Teddy Bear Toss game. Fans are encouraged to bring new or gently used teddy bears to toss on the ice after Flint scores their first goal. The teddy bears will be collected and donated to the Old Newsboys of Flint, the YWCA, Hurley Medical Center, and many others. Family four-pack of tickets (includes food and drinks) are available starting at just $72. Puck drop is scheduled for 7 p.m. (ET). Tickets are on sale NOW here: ETIX.

Brennan Othmann (New York Rangers) maintains the top spot for Flint with a total of 33 points (17 G, 16 A) in 21 games played. He ranks fifth in goals-scored in the OHL, and he has exactly tied his exact numbers from his rookie season (17 G, 16 A), only in 34 games fewer than in the 2019-20 campaign. Second in points for Flint is blue-liner Tyler Deline with 19 total points (3 G, 16 A).  Deline is tied for sixth among OHL defensemen in both total points (19) and points-per-game (.90). His 11 power-play assists are tied for third-most in the OHL’s blue-line group. Amadeus Lombardi (9 G, 9 A) ranks third with 18 points.

The ‘Birds also have five players with a point streak of three or more games currently. Riley Piercey has put up points in eight consecutive contests, scoring six goals and earning six helpers in that span. Pitre has three tallies and five assists in his four-game point streak. Brennan Othmann, Sahil Panwar, and Zacharie Giroux each have points in three-straight games.

Flint’s top rookie on the scoresheet is Coulson Pitre with eight goals and nine assists in only 15 games. Pitre sits atop the list of OHL rookies with a 1.13 points-per-game average, and he’s tied for sixth in the league’s freshman class for goals. Fellow rookie Luca D’Amato is tied for eighth among rookies with a + 7 rating in the +/- category, and he’s tied for eighth among defensemen with five goals this season. He also leads all OHL defensemen in shooting percentage at 18.5%/

In net, Luke Cavallin has appeared in 15 games thus far. He carries a goals-against average (GAA) of 3.40. His save percentage (SV%) is .900. Cavallin has earned eight wins this season and is the all-time winningest goaltender in Firebirds’ franchise history with 34 total victories between the pipes. Rookie netminder Ian Michelone has now played in six games and has four victories. He carries a GAA of 3.52, which is fourth-best among rookie netminders who’ve played in at least three games. His SV% of .902 is the best among the same class of fresh goaltenders. To date, Michelone is the only OHL rookie goaltender with a shutout this season. Nathaniel Day has played 18 minutes of OHL action and made four saves on four shots.

Deni Goure leads the Attack on the scoresheet with 11 goals and 12 helpers through 23 games played. Rookie Servac Petrovsky is tied for second on the team with 18 total points (6 G, 12 A). His 18 points are tied for 5th best among the OHL freshman class. Defenseman Andrew Perrot has one goal and a team-high 17 assists to tie for second with Petrovsky. Perrot ranks fourth among defenders in total assists, and he’s tied for fifth in the group with 10 power-play helpers. Also noteworthy is recently-acquired center William Portokalis, who’s contributed eight points (5 G, 3 A) in just nine games since being acquired from the Steelheads.

Between the pipes, Nick Chenard has made ten appearances and earned four victories. He carries a 2.63 goals-against average (GAA), and a save percentage (SV%). The 2.63 GAA is the fifth-best in the league, and his SV% is second-best. Rookie netminder Corbin Votary has one win in six appearances, along with a 4.85 GAA and a .838 SV%.

NHL: The Attack are currently without any players with NHL ties. However, Servac Petrovsky, Gavin Bryant, and Cedrick Guindon were named to the 2021 NHL Central Scouting November Players to Watch List.

Broadcast Coverage:
Friday evening’s contest against the Owen Sound Attack can be heard live on the radio throughout Flint & Mid-Michigan on US 103.1 FM, online at www.us103.com, or by downloading the US 103 app here. Jack Sznewajs will call the play-by-play action on the Firebirds Hockey Network (FHN). Pregame coverage will begin prior to puck drop at 6:45 p.m. (ET) Friday evening.

The game will also be televised live across the province of Ontario on the OHL Action Pak on channel 463 (4463 HD) for both Rogers TV and Cogeco TV cable subscribers. OHL fans with cable television in Ontario can add the OHL Action Pak to their television plan to catch the Firebirds in action, home or away all season long.

Also, all Flint Firebirds’ home and away games throughout the 2021-22 regular season can be watched anywhere in the world online on https://watch.chl.ca/ohl. CHL TV is the league’s new and improved video streaming platform that delivers high-quality live and on-demand coverage of all regular season and playoff games annually. The cost is $6.99 for 24-hour access, $24.99 for monthly access, $109.99 for all-access to the 2021-22 Firebirds and OHL season, or $159.99 for all-access to the entire 2021-22 CHL season. As mentioned, tonight’s game is the CHL Game of the Week and is FREE to watch on CHL TV HERE.

Next Home Game:  The Firebirds will host the Attack again on Saturday evening. Saturday’s contest is Old Newsboys Night, Sponsored by Dort Financial Credit Union. Fans can bring a toy (recommended minimum $10 value) and get a FREE ticket compliments of Dort Financial Credit Union. Toys will be collected leading up to the game at the “Birds Nest,” the official Firebirds Merchandise Store. The Firebirds will be wearing special Santa-themed Jerseys that will be available in a Live Auction at the conclusion of the game. Puck drop is scheduled for 7 p.m. (ET) at the Dort Financial Center. Tickets are on sale NOW here: ETIX.