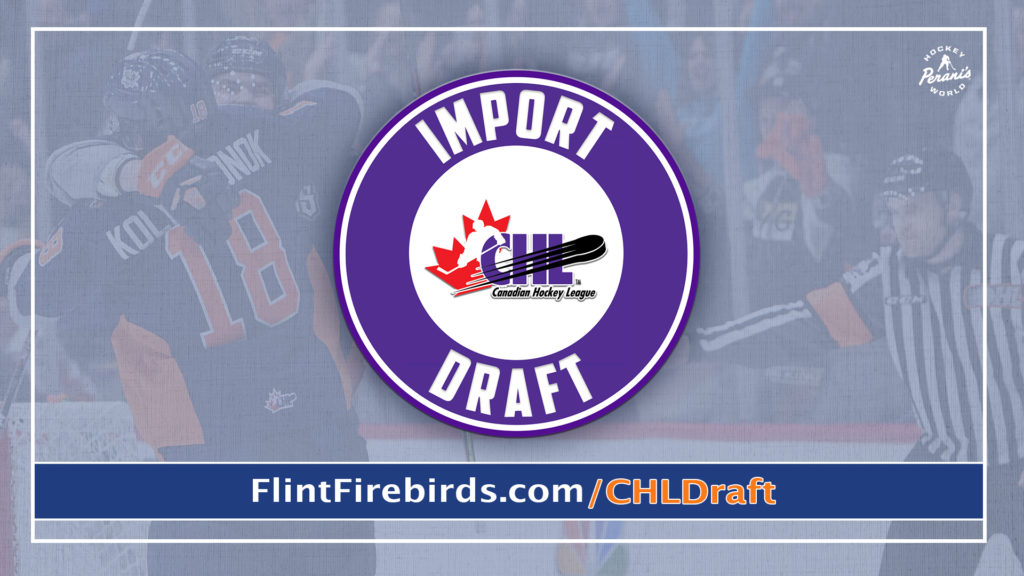 Flint is expected to select one player with the 46th-overall pick. Through the CHL Import Draft, each team in the CHL is permitted to dress and play a maximum of two import players each season. The Firebirds have the rights to two players: Vladislav Kolyachonok and Evegeniy Oksentyuk. However, because Kolyachonok is a draft pick of the Florida Panthers and signed an NHL contract out of the Firebirds’ program, Flint is in a position to be able to select an additional Import player.

The two-round draft will take place online with the order of selection rotating through each of the CHL’s three leagues using an inverse order of final regular season standings within each league from the 2019-20 season. The Ontario Hockey League’s North Bay Battalion hold the number one pick, followed by the Quebec Major Junior Hockey League’s Acadie-Bathurst Titan at number two, and the Western Hockey League’s Swift Current Broncos who will select third overall.

Last season, the Firebirds selected Belarusian forward Evgeniy Oksentyuk with the 5th-overall pick in the 2019 CHL Import Draft. Oksentyuk led the Firebirds with 78 points (33G, 45A) in 58 games and was recognized by the Canadian Hockey League (CHL) as one of the top-5 impact players from last year’s CHL Import Draft. The Brest, Belarus native set a Firebirds’ franchise record for the longest point-streak by a single player, recording a point in 17 consecutive games from Nov. 15, 2019 – Jan. 17, 2020. After choosing to move to Flint and play with the Firebirds, Oksentyuk is now expected to hear his name called at the upcoming 2020 NHL Draft.

The import draft is seen as a way to raise the level of competition in the CHL, as well as to broaden its fan base while retaining high North American content. Last season a total of 81 players were selected from 14 different countries led by 17 players from the Czech Republic and consisting of 48 forwards, 27 defensemen, and six goaltenders.