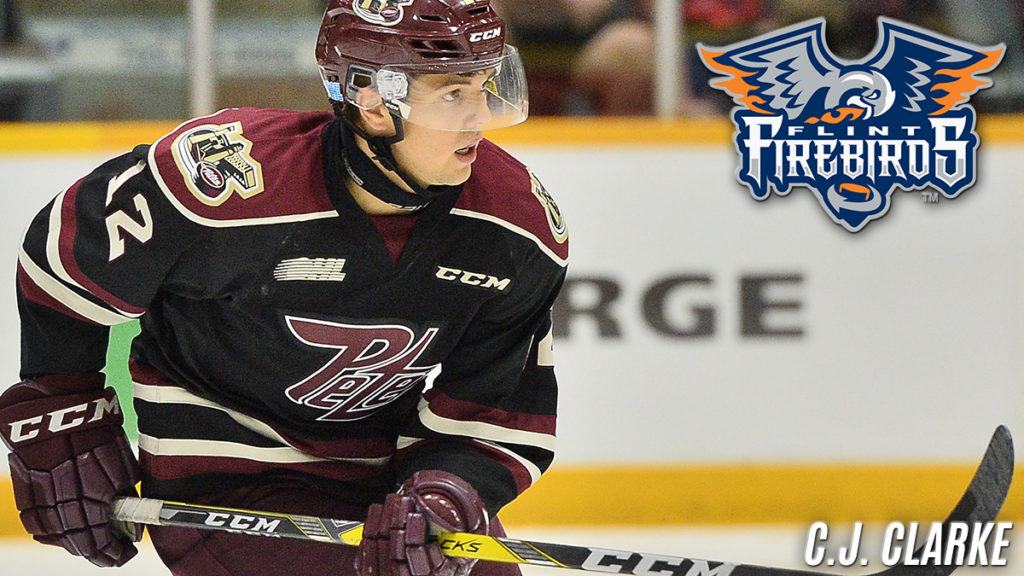 Flint, Mich. – The Flint Firebirds announced today that the club has completed a trade with the Peterborough Petes.

Clarke, a six-foot, 200-pound forward, was a second-round draft pick (29th overall) of the Peterborough Petes in the 2015 OHL Priority Selection. He is in the midst of his second season in the OHL and has recorded 13 points (7G, 6A), including 21 penalty minutes, in 80 games with the Petes. Clarke tallied seven points in the first nine games this campaign before missing over a month of hockey due to injury, returning Nov. 24.

“C.J. is a talented forward that was caught in a numbers game on a veteran team in Peterborough,” said Flint Firebirds General Manager George Burnett. “He has good size, skates well, is highly skilled and will have an excellent opportunity with our group. In speaking with him, C.J. wants to be a Flint Firebird and with more than three years of eligibility remaining, he will be a key member of our team moving forward.”

Prior to playing with Peterborough, the Mississauga, Ont., native amassed 64 points (31G, 33A) in 74 games with the Toronto Marlboros Minor Midget AAA Hockey Club. Clarke also racked up five goals for six points in seven games en-route to capturing the prestigious OHL Cup Championship in 2015.

Clarke is expected to join the Firebirds tomorrow when the club heads to Saginaw for a Tuesday night (Jan. 10) contest against the Spirit. Puck drop is set for 7:05 p.m. at the Dow Event Center in Saginaw, Mich. Fans unable to make the trip to Saginaw can listen to the game live on 1330 AM WTRX Sports Radio in Flint and Mid-Michigan. In addition, the game will be televised live throughout the province of Ontario on channel 440 for Rogers TV cable subscribers and channel 481 for Cogeco TV subscribers. (Broadcast Information)

Next Home Game:
The Firebirds return back to Flint Friday, Jan. 20 against the Sault Ste. Marie Greyhounds. During the month of January, fans may bring in three or more canned or boxed food items to receive a complimentary Silver Level ticket. Fans may drop off donated food at the Flint Firebirds Merchandise Store to receive the discount.