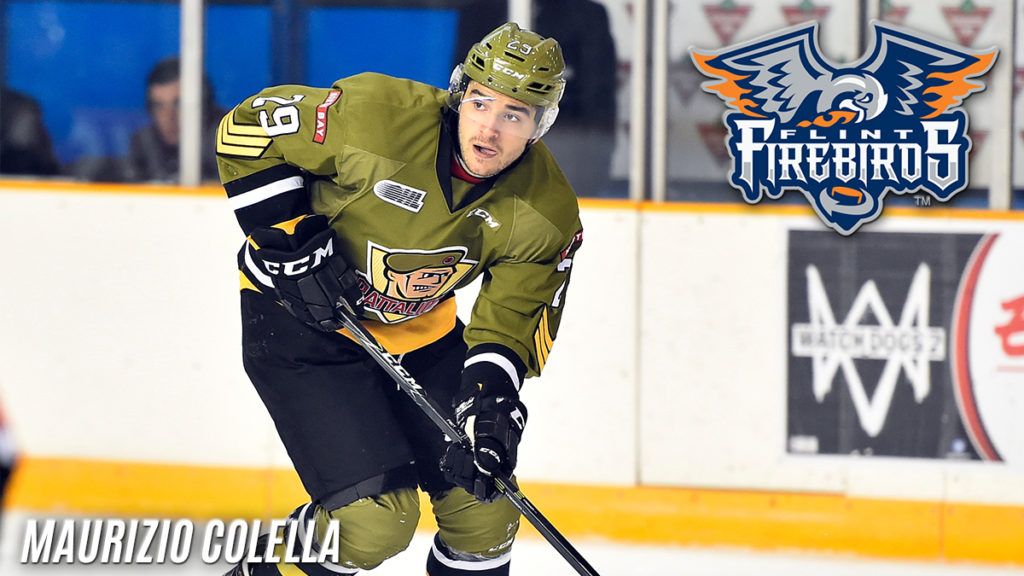 Flint, Mich. – The Flint Firebirds announced today that the club has completed a trade with the North Bay Battalion.

In the trade, the Firebirds acquired North Bay’s Maurizio Colella for Mississauga’s fifth-round pick in 2019.

“Maurizo is an experienced forward that we know very well,” said Flint Firebirds General Manager George Burnett. “He is a quality individual that will be a good asset to our program moving forward.”

Colella, a native of Tottenham, Ont. is currently in the midst of his best OHL season, recording 16 points (6G, 10A) including 21 penalty minutes in 35 games with the Battalion. The six-foot, 187-pound forward is in his third season in the Ontario Hockey League and has competed for the Belleville Bulls, Hamilton Bulldogs and the Battalion.

“He’s a veteran guy that’s played a lot of games in this league,” said Flint Firebirds Head Coach Ryan Oulahen. “He’s someone I’m very familiar with and I’m really excited for him to join our program. He’s a versatile forward that can play in all situations and someone that will really be able to help us down the stretch here.”

Colella is expected to join the Firebirds for Saturday’s home game against the Guelph Storm.

Join the Firebirds Friday night as fans will be treated to a special guest appearance from Mickey Redmond, a former player and now TV Analyst on FOX Sports Detroit for the Detroit Red Wings. NHL Hall of Famer, Redmond, a two-time 50-goal scorer for the Red Wings will be in attendance for an autograph session on the arena concourse from 6-7:30 p.m. The autograph session is available to all fans with a suggested $5 donation to the Firebirds Charitable Foundation. (More Information)

Additionally, during the month of January, fans may bring in three or more canned or boxed food items to receive a complimentary Silver Level ticket. Fans may drop off donated food at the Flint Firebirds Merchandise Store to receive the discount.