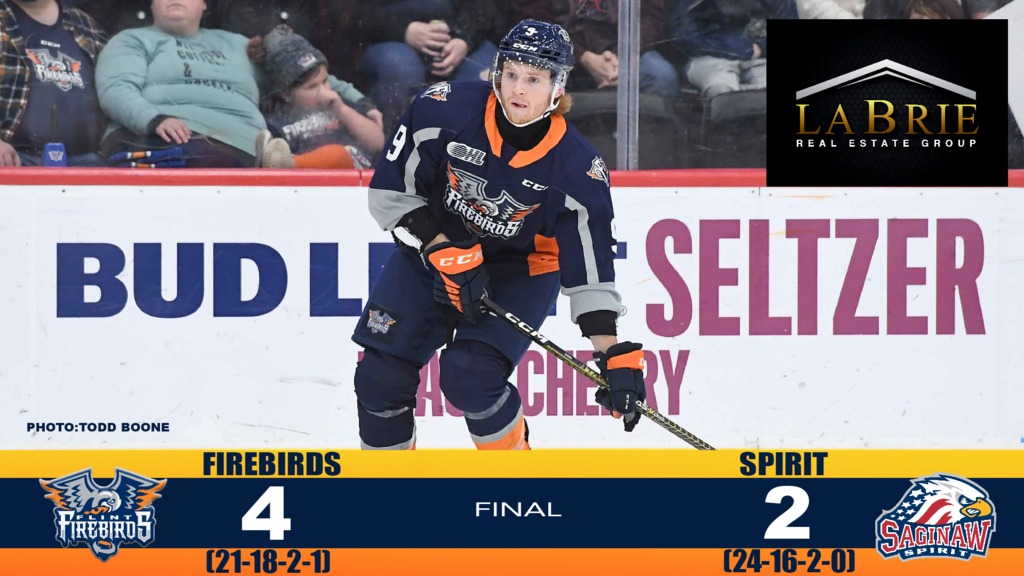 Flint, Mich. – The Firebirds kept the series alive versus their in-state rivals from Saginaw with a 4-2 triumph on home ice Saturday. The I-75 Divide Cup, presented by Coors Light, is awarded to the team with the most victories between these clubs each season, and the Spirit now leads 4-2 with two games remaining. Amadeus Lombardi scored twice en route to ‘First Star’ accolades in the contest. Zacharie Giroux was named the ‘Second Star’ for a goal an and assist. Nathan Day won back-to-back games on the weekend, making 27 saves on 29 shots to earn ‘Third Star’ honors. Andrew Oke posted 30 saves on 33 shots between the pipes for Saginaw.

Amadeus Lombardi gave Flint the early lead, using his speed to get around a defender up the left-wing side. He shot from a wide angle below the left circle, and the puck went in off the back of Oke’s equipment at 5:00 of the opening frame. Zacharie Giroux earned the lone helper on Lombardi’s 24th of the season.

The Spirit’s equalizer came with just over five seconds remaining in the first period. Matyas Sapovaliv attempted a short-range one-timer between the circles off a setup pass from Calumet, Mich. native Dean Loukus. Day made the save, but he was unable to recover quickly with a traffic jam in the crease and slot. Liam Storch, who hails from Rochester Hills, Mich. grabbed the loose puck and shot through a slew of bodies. It found the back of the net for Storch’s second of the season.

The score was knotted at one and the shots were equal at 11 per side after 20 minutes were played. The Birds outdrew Saginaw 11-6 in the frame. The Spirit went scoreless on one power-play chance while the Firebirds finished 0-for-2.

The Spirit earned their first lead of the night 1:10 into period two. Loukus made a breakout pass that sprung Sapovaliv and Theo Hill on a two-on-one rush into the Flint zone. Hill carried on the left side and flipped a saucer pass over the diving defender to set up Sapovalev’s one-timer for his 13th of the year.

The lead didn’t last long, as the Firebirds tilted momentum back in their favor moments later. Gavin Hayes carried up the right side and split a pair of defenders entering the zone. The puck slipped free, but he was able to regain possession deep in the right corner. He centered a pass to Braeden Kressler crashing the net from the right circle, and Kressler lifted it just over the outstretched left pad of Oke for his 19th of the campaign at 4:28. Nolan Dann combined with Hayes for the assists.

The Firebirds went on a power play shy of the midway point of the second and quickly converted for the 3-2 lead. Coulson Pitre’s slap-pass from the right was deflected up and over Oke’s right shoulder by Amadeus Lombardi in the slot. His second of the night and 25th of the season was logged at 8:35, and assisted by Pitre and Tristan Bertucci.

Through 40 minutes of play, Flint held a 3-2 lead on the scoreboard. Second-period shot were 12-9 to the Birds’ advantage, while also outdrawing the Spirit 10-7. Flint was a perfect 1-for-1 with the man advantage off Lombardi’s second goal.

The third period featured plenty of scoring chances and acrobatic saves on both ends of the ice, with neither club giving an inch defensively. Still trailing by one, the Spirit called their lone timeout during a stoppage in play with 2:18 remaining in regulation. Oke was pulled for the extra attacker with exactly two minutes to go. Saginaw maintained control of the puck in Flint’s end for more than 90 seconds, until Braeden Kressler gathered a deflected pass and unselfishly passed to Giroux at the blue line. Giroux’s shot hit the empty cage dead center for his 16th of the season, sealing the Birds’ 4-2 win.

The final shots were 34 for Flint and 29 for the visitors from Saginaw. The Firebirds also won more faceoffs by a margin of  29-21. On special teams, the Birds went 1-for-4 with the man advantage while killing off their lone penalty taken.

Next Up: The Flint Firebirds will host their first-ever Family ‘FUN’day Sunday S.T.E.A.M. Day versus the Erie Otters tomorrow afternoon. Get two FREE kids tickets (ages 12 & under) for every ONE paid adult admission, valid at the Dort Financial Center Box Office Only. Starting at 3:00 p.m. when the doors open there will be science, technology, engineering, art, and mathematic activities or demonstrations that will be set up around the concourse for children and families to participate in. Children (17 & under) who partake in all of the activities & demonstrations will receive a FREE S.T.E.A.M. Day puck for their participation, while supplies last. S.T.E.A.M. Day would not be possible without the support of the following organizations: Kettering University, First Robotics, YMCA Camp Copneconic, Math4Flint, and the Flint & Genesee Literacy Group. All other tickets for Sunday’s game can be found at ETIX HERE.