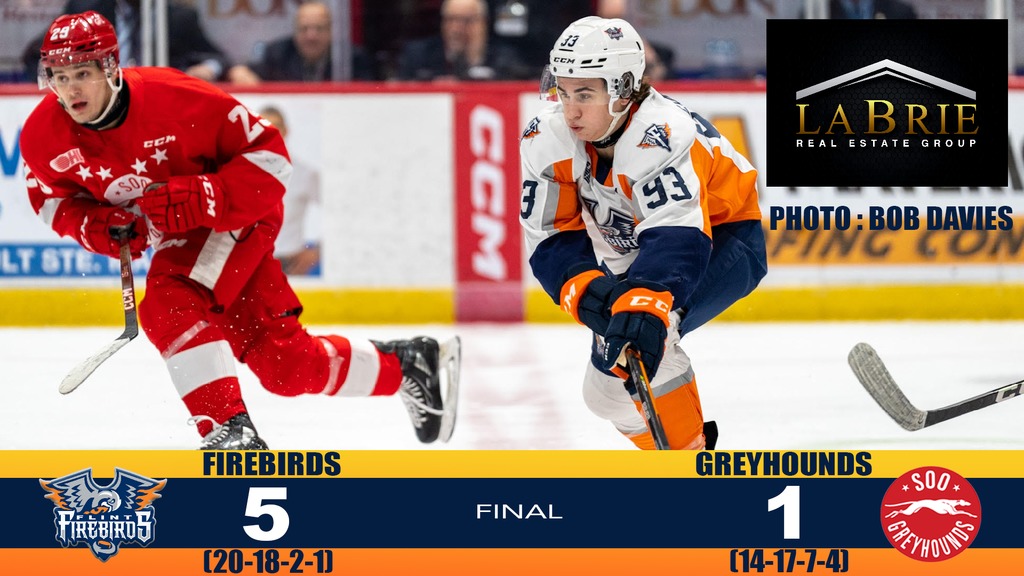 Sault Ste. Marie, Ont. – The Firebirds concluded their five-game road trip with a decisive 5-1 triumph to sweep the Soo Greyhounds in six straight games for the season. Nolan Dann logged his fourth and fifth points in his fourth game with Flint, scoring twice in the contest. Gavin Hayes (1 G, 1 A), Zacharie Giroux (1 G, 1 A), and Tristan Bertucci (2 A) each contributed two points as well. Between the pipes, Nathan Day earned his sixth victory of the season with an impressive 26-save performance. Across the ice, Samuel Ivanov logged 26 saves on 30 shots for the Hounds.

The first period was a battle of special teams, with both clubs seeing three power plays. The goaltenders combined with skaters sacrificing their bodies to block shots and kill all six penalties. The Hounds potted the lone marker of the frame at even strength at the 18:38 mark to take a 1-0 lead into intermission. Caeden Carlisle set up Christopher Brown for the initial shot from the bottom of the left circle. Day dove across his crease to make the save, but the rebound went to Marco Mignosa in the slot for the tap-in for his sixth of the season.

First-period shots ended in Sault Ste. Marie’s favor 9-4. The Firebirds won 11 of 19 faceoffs, and both clubs went 0-for-3 on the man advantage.

Both sides produced more offensive opportunities in the middle frame, with none better than a penalty shot awarded to the Soo’s leading scorer Bryce McConnell-Barker at 11:08. He approached Day from the left and slowed on approach. He tried a low wrister aimed for the five-hole, but Day dropped the right pad and kicked it aside.

The Birds scored the only two markers of the center stanza. First, Nolan Dann netted the equalizer at 12:28 with a crafty redirection in the slot off a pass from Braeden Kressler who was below the goal line. Dmitry Kuzmin picked up the second assist. Then, the Firebirds took their first lead with 1:17 remaining. Zacharie Giroux carried up the left-wing side of the zone, faking a shot from the top of the circle before snapping his shot up high over the blocker for his 15th of the campaign, assisted by Tristan Bertucci and Coulson Pitre.

Shots in the middle frame were 13-11 to the Greyhounds’ advantage, and they outdrew the Birds by one 10-9. The Soo had the only power-play chance but were held off the board.

Dann lit the lamp a second time early in the third for his ninth of the campaign. From the middle of the left-wing circle, he fired mid-height to the far side. Ivanov got a piece of the puck with his glove, but it slipped past and into the net just 39 seconds into the final frame. Gavin Hayes picked up the lone assist.

Late in the third, Marko Stojkov grabbed a pass from Giroux at the right point and walked the line toward the center point. He wristed the puck into heavy traffic, and it made its way through bodies to make find twine. Stojkov’s second of the season was challenged for goaltender interference on the play, but the marker was deemed legal, giving Flint the 4-1 lead with 6:16 to play in regulation.

Sault Ste. Marie opted to pull Ivanov with north of five minutes remaining on the clock. Gavin Hayes claimed a loose puck and carried it to the top of the right circle before slipping it past his defender into the empty net for his 24th of the year at 15:24. Riley Piercey combined with Bertucci for the helpers.

Final shots were 31 for Flint and 27 for the Greyhounds. The Birds outdrew the Soo 32-29. The clubs each went 0-for-5 with the man advantage.

Next Up: Flint returns home for a pair of home games to complete another three-games-in-three-days weekend. First up is tomorrow when they host the Saginaw Spirit for another installment of the I-75 Divide Cup, presented by Coors Light. With the Firebirds trailing four games to one, the visiting Spirit can reclaim the Cup in Flint. Puck drop is set for 7:00 p.m. and tickets can be found at the Dort Financial Center Box Office or at ETIX HERE. Then on Sunday, the Erie Otters are in town for a 4:00 p.m. tilt. The Flint Firebirds are preparing to host their first-ever Family ‘FUN’day Sunday S.T.E.A.M. Day. Get two FREE kids tickets (ages 12 & under) for every ONE paid adult admission, valid at the Dort Financial Center Box Office Only. Starting at 3:00 p.m. when the doors open there will be science, technology, engineering, art, and mathematic activities or demonstrations that will be set up around the concourse for children and families to participate in. Children (17 & under) who partake in all of the activities & demonstrations will receive a FREE S.T.E.A.M. Day puck for their participation, while supplies last. S.T.E.A.M. Day would not be possible without the support of the following organizations: Kettering University, First Robotics, YMCA Camp Copneconic, Math4Flint, and the Flint & Genesee Literacy Group. All other tickets for Sunday’s game can be found at ETIX HERE.