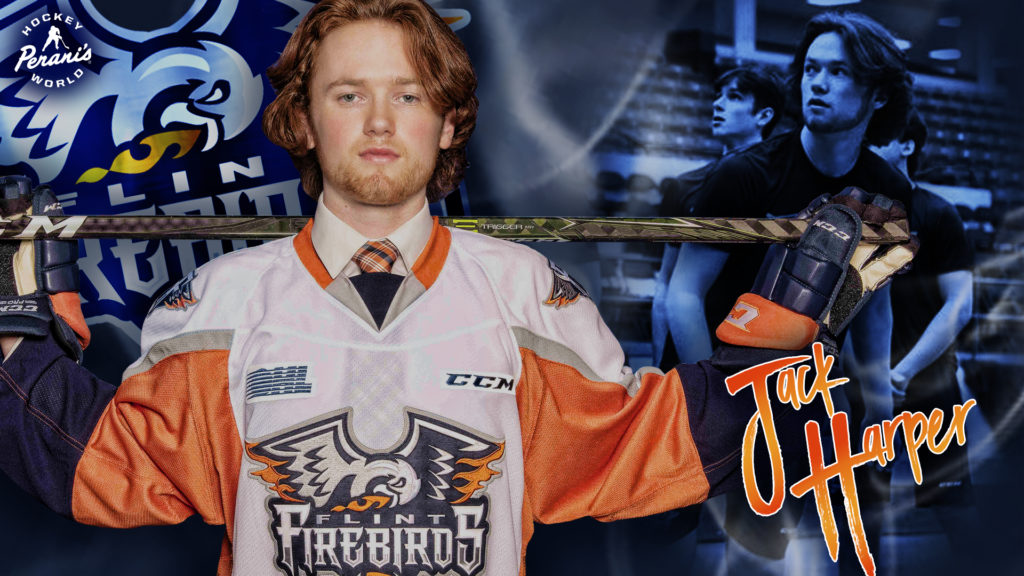 “We are excited to have Jack and his family committed to the Flint Firebirds’ organization,” said Flint Firebirds Vice President of Hockey Operations and General Manager Barclay Branch. “Jack is a talented player that brings speed, skill and a high compete level to our group. He exemplifies all of the qualities that we look for in a player and person.”

Harper, a native of Guelph, Ont., was heavily recruited with NCAA options before choosing to continue his hockey and academic development in Flint. He was selected by the Firebirds in the seventh-round (122nd overall) of the 2018 OHL Draft after recording 36 points (12G, 24A) in 35 games as a defenseman with the Guelph Jr. Gryphons in the Ontario Minor Hockey Association’s South-Central Triple A Hockey League (OMHA-SCTA) during the 2017-18 season. He played a key role in leading Guelph to the OMHA championships prior to being named to the Team OMHA roster at the prestigious OHL Gold Cup.

“Signing with Flint means everything to me,” said Harper. “I’m really excited that it’s finally official. I think the organization is in great hands and that there is a bright future ahead in Flint. The fans love their hockey there and I can’t wait to be part of it.”

Harper, a 5-foot-10, 170-pound skater, tallied 19 points (9G, 10A) in 43 Tier-II Junior A hockey games with the Burlington Cougars in the Ontario Junior Hockey League (OJHL) during the 2018-19 season and was named both Burlington’s “Rookie of the Year” award and Burlington’s Tom Neziol “Top Prospect” award winner.

HockeyProspect.com Scouting Report: The puck-rushing defenseman has an explosive first step to separate himself when in possession and close the gap quickly on opposing forwards. He has good two-way abilities with great gap control. Harper is mindful of the open man when the second defensemen back and hustles back hard when not in possession to pick up a man. He regularly squares off puck carriers trying to gain the zone by keeping them outside before pinning them to the boards. In front of the net, he keeps opponents in check and actively supports teammates when needed along the boards in the defensive zone. In board battles, he is relentless with a quick stick and aggressiveness that allows his team to come away with the puck more often than not.

Jack will arrive in Flint for training camp in late August.