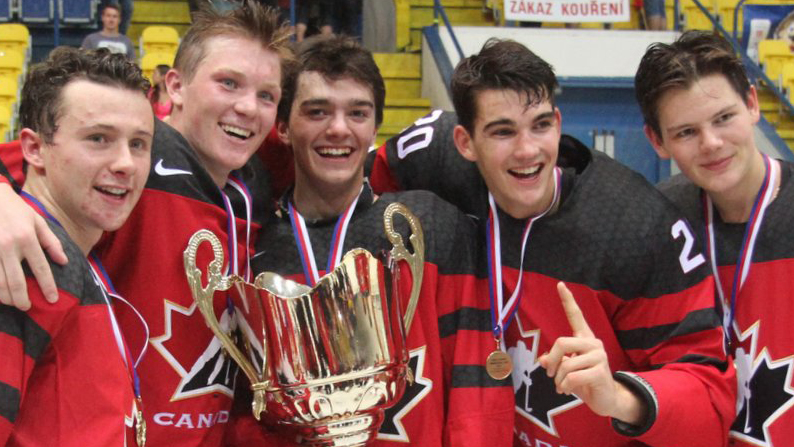 BRECLAV, Czech Republic – Firebirds’ Ty Dellandrea is one of seven OHL players that claimed gold at the Ivan Hlinka Memorial Cup with a 4-1 win over the Czech Republic on Saturday. The win was the ninth in 10 years for Canada’s National Men’s Summer Under-18 Team.

In April, Dellandrea was one of just three under-aged players to be selected for Canada’s Men’s U-18 National Team for the 2017 IIHF U18 World Championship in Poprad and Spisska Nova Ves, Slovakia. He was then one of 22 players tabbed to represent Canada at the 2017 Ivan Hlinka Memorial Cup on Aug. 1.

After being selected in the first-round, fifth overall by the Flint Firebirds in the 2016 OHL Priority Selection, Dellandrea set Firebirds’ records for most goals by a rookie (13) and points by a rookie (24) throughout the 2016-17 season.

Jared McIsaac (Halifax Mooseheads) opened the scoring for Canada with the lone goal of the first period as the red and white held a decisive 19-4 shot advantage through 20 minutes of play.

Veleno’s goal doubled Canada’s lead at the 2:19 mark before Dominik Arnost put the Czechs on the board at 6:59.  Defenceman Kevin Bahl (Ottawa 67’s) scored his first goal of the tournament in the final minute of the middle frame providing Canada with some insurance heading into the third.

Barrie Colts prospect Jack McBain finished the scoring in the third period completing a three-point effort when he capitalized off a rebound from a Ty Smith (Spokane Chiefs) shot at 7:53.

Olivier Rodrigue (Drummondville Voltigeurs) was solid in goal turning aside 18 as the Canadians dominated the shot clock 46-19.

It is the 21st time in 27 summer U18 tournaments Canada has finished atop the podium, dating back to 1991.

The Canadians will try to make it 22 summer gold medals when the Ivan Hlinka Memorial Cup comes to home ice for the first time in 2018; Edmonton will host next August, the first time a major summer U18 tournament is played in Canada since the 1996 Air Canada Pacific Cup in Nelson and Castlegar, B.C.