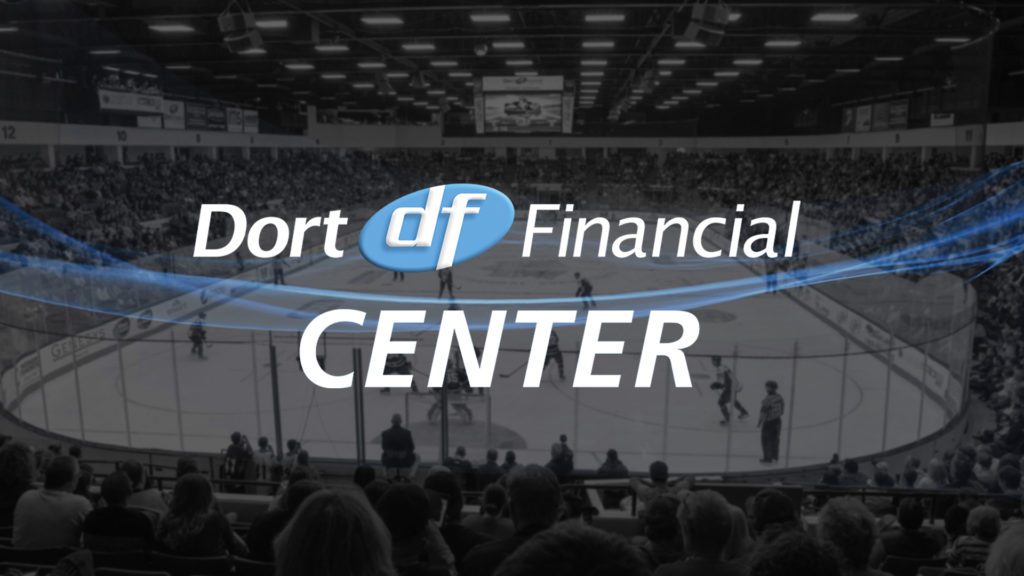 The name change is in conjunction with the January 2020 announcement that Dort Federal Credit Union would be rebranding to Dort Financial Credit Union as they moved from a federal charter to a state charter. The charter change allows the credit union to now serve the entire state of Michigan. “During the credit union’s rebranding process, it seemed the perfect time to reconsider the name at the arena” said Vicki Hawkins, CEO and President of, Dort Financial Credit Union.

“We are so proud to have the opportunity to play a part in Dort Financial Credit Union’s growth over the last five years and are excited to be a part of the future growth opportunities provided to them by their new charter,” said Jeremy Torrey, Dort Financial Center General Manager and Flint Firebirds President.

As part of the name change, residents will see new signs installed on the I-69 marquee, around the grounds of the facility and throughout the event center over the next few months.  The goal is to have all of the work completed by December 1, 2020, the Ontario Hockey League’s (OHL) announced ‘Return to Play’ date, which is subject to assurance that players, fans, staff and the community are able to play and attend games safely.

About Dort Financial Credit Union:
Founded in 1951, Dort Financial Credit Union serves more than 93,000 members and has ten locations. Membership is open to anyone who lives, works, attends school and worships in the State of Michigan. The credit union offers comprehensive financial services, including auto loans, mortgages, high interest checking accounts and much more. Learn more at dortonline.org.

About Dort Financial Center:
The Dort Financial Center, originally known as the IMA Sports Arena, has been a staple for entertainment and community gatherings in Flint and Genesee County for over 50 years.  Since IMS Hockey Corporation Owner Rolf Nilsen purchased the Dort Financial Event Center and Flint Firebirds in early 2015 over $10 million dollars has been invested in the improvement and operation of the organizations.  In addition to the Flint Firebirds the Center is home to many of the largest events in mid-Michigan including the Shrine Circus, Chrome and Ice Winter Car Classic, Big Brothers Big Sisters Motorcycle Ice Races, Concerts, Trade Shows, High School and College Commencement Ceremonies, Banquets, Fundraisers and much, much more.