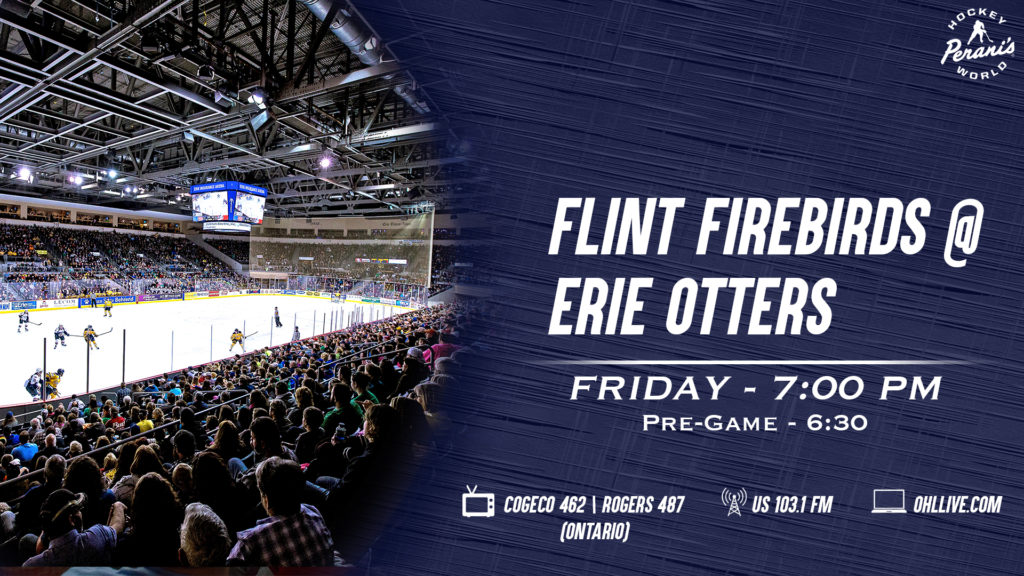 Erie, Penn. – The Flint Firebirds traveled to Pennsylvania Thursday to battle the Otters on franchise-best winning streaks both overall (7 games) and on the road (4 games). Puck drop is set for 7 p.m. (ET) Friday at the Erie Insurance Arena (cap. 6,716) in downtown Erie.

Flint enters Friday’s contest having won their last seven games and earning points in nine of their last 10 games. The club has also set a new franchise-best with four-consecutive road victories. The Firebirds have now claimed 16 of the last 20 points available.

Friday marks the second of four meetings between these two clubs and the first of two in Erie this season. All-time, the Firebirds hold a record of 4-8-2-3 versus the Otters and are 2-3-0-3 at the Erie Insurance Arena. Last season the ‘Birds went 1-2-1-0 in the series and were 0-2-0-0 in away games. Of note, six of the 16 contests between these clubs have required extra time.

The last time these teams met was last Friday on Jan. 31 in Flint. The ‘Birds skated to a 4 – 3 overtime victory led by Riley McCourt’s first-career hat-trick. Brennan Othmann also found twine, and Cody Morgan logged two assists. Anthony Popovich made 36 saves on 39 shots and was credited with a helper in the contest. The teams combined for more than 30 penalty minutes plus multiple misconducts in a very physical confrontation.

The similarities between these clubs’ special teams is noteworthy for Friday’s contest. Flint’s penalty-kill (PK) sits tied for fourth-best at 82.1%. Erie’s penalty-killers are ranked first overall in the OHL at 83.4%. With the man-advantage, the Otters rank 20th in the league, converting at a rate of 16.5% and the Firebirds are 18th, scoring at a 17.7% clip.

Flint Firebirds (29-17-1-1, 3rd West Division):
Ty Dellandrea (Dallas Stars) tops the stat sheet for Flint with 28 goals and 32 helpers for 60 points in 38 games-played. Belarusian forward Evgeniy Oksentyuk sits second on the club with 23 goals and 29 assists for 31 points in 43 contests. He rides a five-game point-streak (2G, 4A) into Friday’s tilt.

Riley McCourt holds several franchise records among defensemen, including most goals in a single season (16) and most career goals (26) and career points (95). For the season, McCourt ranks third in total offense with 16 goals and a team-high 34 assists for 50 total points in 48 games. His total points are fifth-most among OHL rearguards, his 16 tallies are tied for fourth, and his 34 helpers are fifth. McCourt also has the fifth-highest points-per-game average among blue-liners at 1.04.

Overage forward Jake Durham is ranks fourth on the squad with 18 goals and 28 assists. He already owns the record for most games-played by any Flint Firebirds’ player (250). Durham ranks third all-time in goals-scored for the franchise with 71. Ryan Moore is the former Firebird who ranks second (behind Dellandrea) with 72.

Brennan Othmann leads the freshman class for the ‘Birds with 24 total points (11G, 13A) through 40 games. His point-total is tied for tenth among rookies in the league, his 11 goals are tied for eighth-most, and his .60 point-per-game is tied for the tenth-highest. Othmann needs just two more goals to tie Dellandrea for most-ever by a rookie for Flint.

In net, Anthony Popovich has played in 34 games this season. He’s earned 20 victories, which are the most by any Flint netminder in a single season and the sixth-most among OHL netminders this season. Popovich’s goals-against average (GAA) is 3.68 and he has the ninth-best save-percentage (SAV%) in the league at .898. Luke Cavallin has nine wins in 18 appearances and carries a 3.65 GAA and a .895 SAV%. Cavallin recently became Flint’s all-time leader in minutes-played and saves by a Firebirds’ netminder. He is now two wins shy of tying former Firebird goalie Garrett Forrest for another record.

Erie Otters (21-18-3-6, 5th Midwest Division):
Maxim Golod leads the Otters with 61 total points (19G, 45A) in 48 games-played. Chad Yetman ranks second on the club with a team-high 30 tallies and 21 assists through 46 contests. The Otters are expected to play both games this weekend without their top defenseman Jamie Drysdale. He was the fourth-overall pick in the 2018 OHL Draft and leads all Erie defensemen with 39 points, which are tied for tenth-most among OHL blue-liners. His 32 assists are tied for sixth and he ranks sixth in points-per-game at 1.03.

First-year forward Connor Lockhart has 20 points (8G, 12A) in 43 games-played to top the Otters’ freshman class.

Between the pipes, Daniel Murphy has made 32 appearances and earned 12 victories, including two shutouts. He carries a 3.37 goals-against average (GAA) and a .892 save-percentage (SAV%). Rookie netminder Aidan Campbell has appeared in 21 contests and picked up nine wins. His GAA is 3.68 and his SAV% is .873.

NHL: Defenseman Jacob Golden (Minnesota Wild) is the lone player on Erie’s roster with NHL ties. In addition, Jamie Drysdale, Hayden Fowler, Austen Swankler, Brendan Hoffmann and netminder Aiden Campbell were named to the NHL Central Scouting’s Midterm Rankings for the upcoming 2020 NHL Draft. Drysdale is the third-ranked skater in North America and the second-ranked OHL player on the list.

Broadcast Coverage:
Friday evening’s contest can be heard live on the radio throughout Flint & Mid-Michigan on US 103.1 FM, online at www.us103.com or by downloading the US 103 app here. Firebirds’ broadcaster Dominic Hennig will call the play-by-play action on the Firebirds Hockey Radio Network with pre-game coverage beginning 30 minutes prior to puck drop at 6:30 p.m.