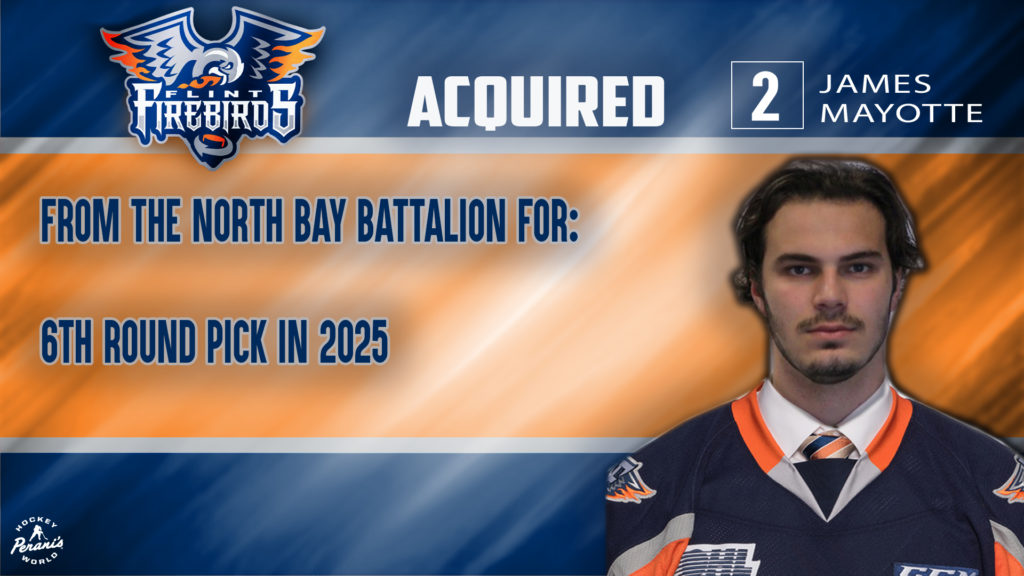 Flint, Mich. –  The Flint Firebirds announced today they have acquired defenseman James Mayotte from the North Bay Battalion in exchange for a sixth-round pick in the 2025 OHL Priority Selection.

“We are very excited that we were able to work a trade out for James Mayotte,” President Hockey of Operations Terry Christensen said. “I have known James for the last couple of years and we believe that he will be a very good defenseman for us.”

“It’s always good to get a fresh start,” Mayotte said. “It’s an exciting opportunity for me. I just want to go in and help the team in any way they see fit. I think my versatility on the ice can be impactful and I’ll follow the coach’s guidance from there.”

About The Flint Firebirds:
The Flint Firebirds are a proud member of the prestigious 20-team Ontario Hockey League. The OHL is one of three leagues that constitute the 60-team Canadian Hockey League (CHL), which is known as the world’s premiere player development league for the NHL. On NHL opening day rosters in October, 70% of NHL players were CHL alums. Since the Firebirds’ inception in Flint, Michigan five seasons ago, the team has produced 21 NHL signed or drafted players. More than 250 scouts representing all 31 NHL clubs attended a Firebirds game in Flint during the 2019-20 season. The Firebirds average nearly 3,000 fans per game at the newly renovated Dort Financial Center, reaching over
100,000 fans each OHL season.