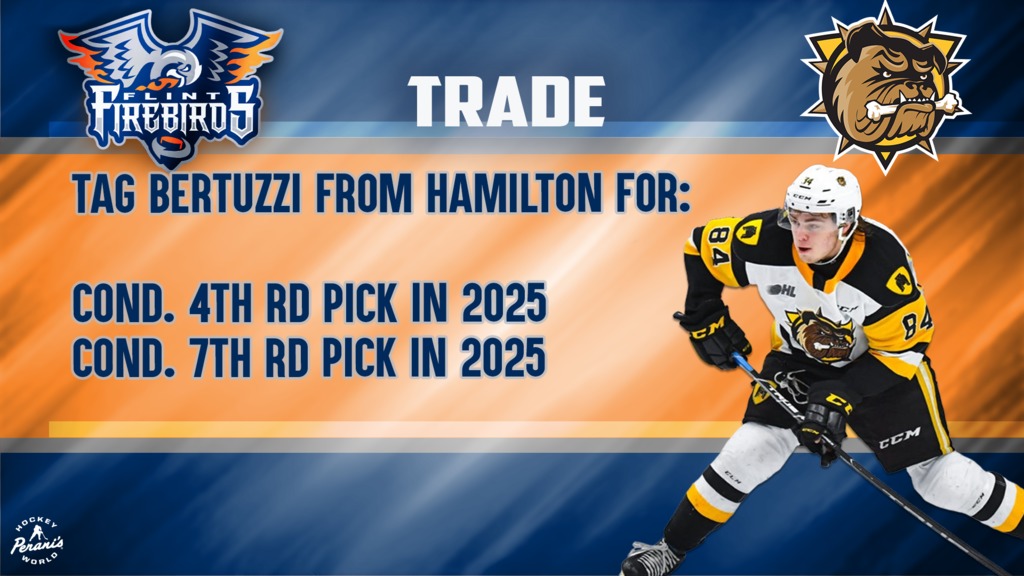 Flint, Mich. –  The Flint Firebirds announced today they have acquired OA forward Tag Bertuzzi from the Hamilton Bulldogs in exchange for a conditional fourth-round pick and a conditional seventh-round pick in the 2025 OHL Priority Selection.

“We are very excited to add Tag Bertuzzi to our lineup,” President of Hockey Operations Terry Christensen said. “He comes from a family that’s grown up in hockey. The last year Tag played in the OHL he was a 25-goal scorer, so we feel he will add a positive dimension to our team.”

“I’m really excited,” Bertuzzi said. “I’m a Michigan guy so I know plenty as far as what the Firebirds are about. I’m looking forward to the season and I’m pumped to get started.”

The Vancouver, ON native played for the Oakland Jr. Grizzlies AAA from 2014-17. He is the son of former NHLer, Todd, and the cousin of current Detroit Red Wing, Tyler.

“I’m just looking forward to the year,” Bertuzzi said. “We got a good young team. I think we’re going to be a very successful team. I’m really excited to get started.”

Bertuzzi plans to wear number-84 for the Firebirds.

About the Ontario Hockey League:
The Ontario Hockey League is a proud member of the Canadian Hockey League which is the world’s largest development hockey league with 60 teams in nine Canadian provinces and four American states. In addition to the OHL, the CHL is made up of the Quebec Major Junior Hockey League and the Western Hockey League. The CHL supplies more players to the National Hockey League and U SPO­­­RTS than any other league.
About The Flint Firebirds:
The Flint Firebirds are a proud member of the prestigious 20-team Ontario Hockey League. The OHL is one of three leagues that constitute the 60-team Canadian Hockey League (CHL), which is known as the world’s premiere player development league for the NHL. On NHL opening day rosters in October, 70% of NHL players were CHL alums. Since the Firebirds’ inception in Flint, Michigan five seasons ago, the team has produced 21 NHL signed or drafted players. More than 250 scouts representing all 31 NHL clubs attended a Firebirds game in Flint during the 2019-20 season. The Firebirds average nearly 3,000 fans per game at the newly renovated Dort Financial Center, reaching over 100,000 fans each OHL season.