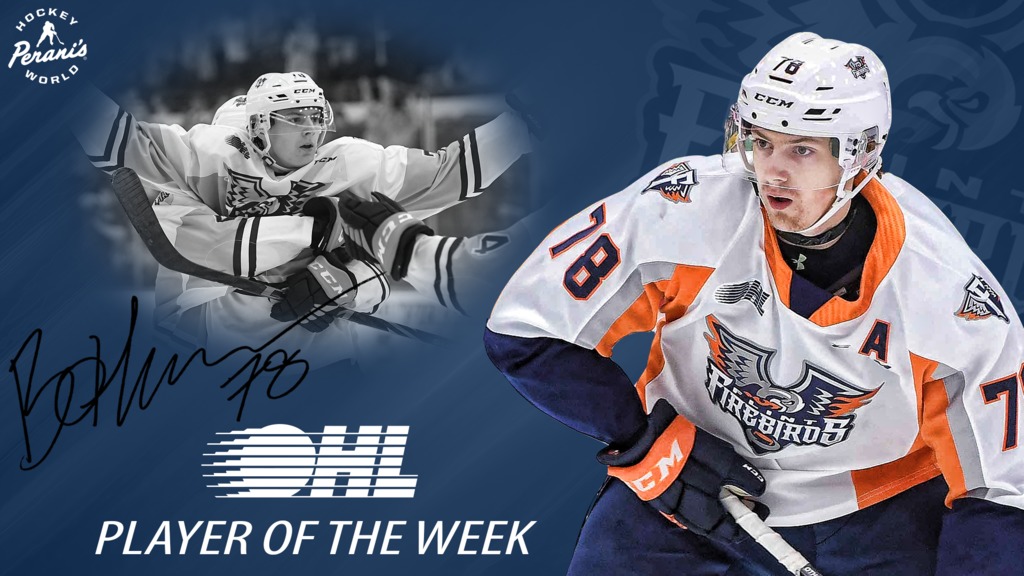 Flint, Mich. – The Ontario Hockey League today announced that New York Rangers prospect Brennan Othmann of the Flint Firebirds is the OHL Player of the Week with seven points including a goal and six assists across three games.

Othmann helped the Firebirds win two of three last week, earning first-star recognition twice. He chipped in with an assist in Wednesday’s 5-3 win over the visiting rival Saginaw Spirit before a three-assist effort on Friday as Flint skated to a 6-3 win in Sarnia. Othmann had a goal and two assists along with nine shots on goal on Saturday as the Firebirds dropped a 4-3 decision on the back-end of a home-and-home against the Sting.

An 18-year-old native of Pickering, Ont., Othmann leads the Firebirds with 27 points (14-13–27) in 17 games this season. His 92 shots on goal are the third-most in the OHL as he produces at a 1.59 point-per-game clip, the fifth-highest pace in the League. A member of Canada’s gold medal-winning National Under-18 Team this past May in Frisco, Texas, Othmann was selected by the New York Rangers with the 16th overall pick of the 2021 NHL Draft. The former OHL Cup champion was Flint’s first-round (2nd overall) pick in the 2019 OHL Priority Selection and was named to the OHL’s First All-Rookie Team in 2019-20 with 33 points (17-16–33) in 55 games.

Also considered for the award this week, Hamilton Bulldogs forward Logan Morrison recorded seven points (1-6–7) as his club picked up five of a possible six points. Nashville Predators prospect Luke Evangelista of the London Knights led the League with five goals along with an assist over three games, and Buffalo Sabres prospect Josh Bloom of the Saginaw Spirit had six points (3-3–6), headlined by two shorthanded goals and a game-winner.

The Firebirds return to the ice Thursday, December 2nd in Saginaw to take on the Spirit at 7:05 p.m. The next Firebirds home game is Wednesday, December 8th at 7:00 p.m. It will be a Buy One, Get One Wednesday. You can purchase all tickets through Etix HERE.