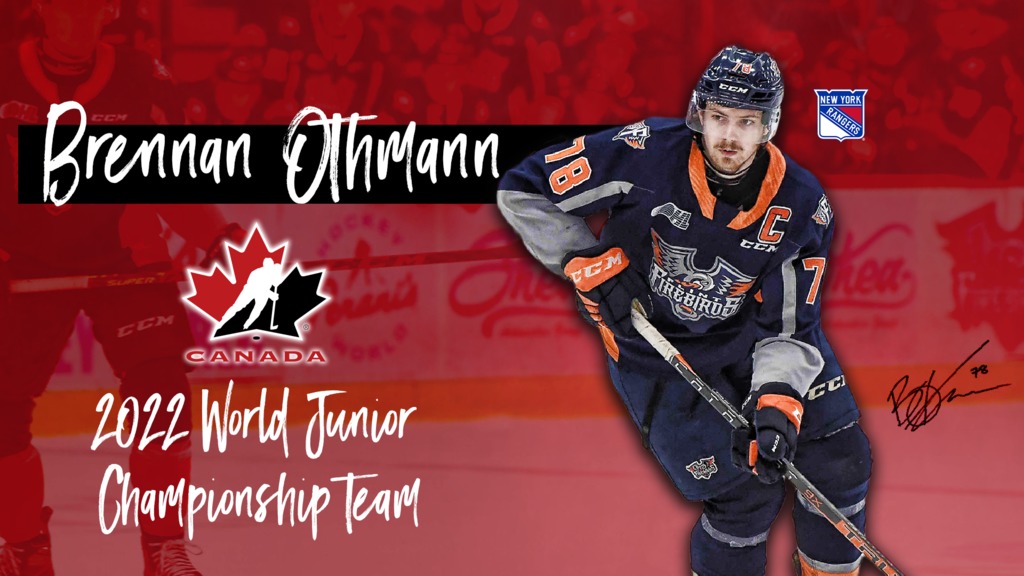 The 2021 1st round pick of the New York Rangers is coming off one of the best individual seasons in franchise history where he set or tied five new franchise records including single-season points (97) and goals (50) as he helped captain the team to Game 7 of the Western Conference Finals. He was one of two players in the Ontario Hockey League to score 50 goals, doing so in style in the regular season finale, and was named to the OHL’s First All-Star Team.

Othmann will now attend training camp in Calgary with the rest of Team Canada at the Seven Chiefs Sportsplex on the Tsuut’ina Nation, beginning today, before traveling to Edmonton, Alb. for the tournament.

The 2022 World Juniors were originally held back in December of 2021 in Edmonton and Red Deer before being canceled due to COVID-19. The new scheduled tournament was announced in February with it set to begin on August 9. Othmann and Team Canada open play vs. Team Latvia on August 10 at 6:00 p.m. ET. The full tournament schedule can be found HERE.

The Firebirds 1st round pick in the 2019 Priority Selection draft will wear number 15 for Team Canada. World Juniors games can be found on NHL Network in the U.S. and TSN in Canada. Follow along Othmann and Team Canada on Twitter @flintfirebirds and @hockeycanada.

Firebirds Defeat Spitfires 4-3 as Day, Slavicek Play Hero in the Shootout
6 hours ago