Firebirds Come Back to Beat the Knights in London, Stretch Point Streak to Six 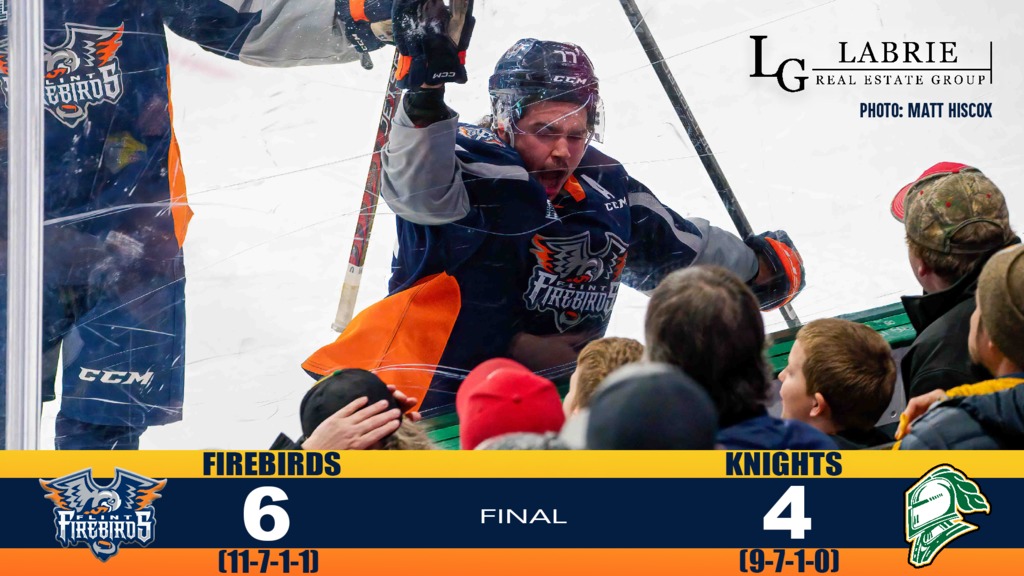 London, Ont. – The Firebirds won the first of back-to-back games against the London Knights by a final score of 6-4 in front of more than 9,000 fans at the Budweiser Gardens Friday extending their point streak to six. Zacharie Giroux led the charge with two goals for Flint, while both Amadeus Lombardi (Detroit Red Wings) and Dmitry Kuzmin (Winnipeg Jets) logged a goal and an assist each. Nathan Day got the victory in net, playing in his 16th career OHL game. Across the ice, Brett Brochu was backstopping the Knights in his 100th career game.

Flint got off to a hot start, outshooting the Knights 5-2 at the seven-minute mark of the opening frame. It was London’s third shot at 10:43 that broke the scoreless tie, however. Logan Mallioux (Montreal Canadians) netted his sixth of the season on the power play off a wrist shot from atop the right-wing circle. Oliver Bonk and George Diaco combined for the assists.

The Firebirds evened the score in the final minute of the first period with a power-play tally of their own. Dmitry Kuzmin (Winnipeg Jets) grabbed a loose puck in the neutral zone and acknowledged the line change at the London bench. He turned on the afterburners and carried around the lone defender who was back before slipping a pass across the slot to Zacharie Giroux in the right circle. Giroux’s one-timer struck the top corner far-side for his fifth of the year at 19:13.

First-period shots ended at an 8-7 advantage for the Knights. Flint was outdrawn 10-6 in the frame as well. The Birds converted on their only power-play opportunity and London finished 1-for-2.

The Firebirds started the 2nd with a bang. Giroux netted his second of the night on a quick even-strength generated by a great individual effort. He blocked a point shot from a defender in his own end and won the foot race to the rebound in front of the benches. With a defender in two, Giroux carried through the left-wing circle and showed patience while Brochu dropped and attempted a poke check. He carried beyond the sprawling netminder and tucked the puck into the far side of the net, unassisted at 1:18.

London would score two even-strength markers in the balance of the middle frame. First, Max McCue (San Jose Sharks) crossed the blue line on the right wall and saucered a backhand pass to Connor Federkow on the far side. Federkow backhanded a pass to Landon Sim (St. Louis Blues) at the right hash marks for his fifth of the season off the one-timer at 14:30.

Next, the Knights set up in the offensive zone and utilized five quick passes to confuse the defense and goaltender. The final pass went to Isaiah George (New York Islanders) centered high above the circles. His heavy shot through traffic found twine for his first goal of the season at 16:57.

Flint held the edge in shots 18-17 through 40 minutes of play but still trailed in the faceoff circles 19-17. The Firebirds had the only man-advantage opportunity in the middle stanza but were unable to convert.

London’s lead held until the final six minutes of regulation when the Firebirds would score back-to-back goals 27 seconds apart. Coulson Pitre’s great individual effort to carry into the offensive end led to a scramble in front of the net. Dmitry Kuzmin found the loose puck and spun around on the backhand to tie the game up on the power play at the 14:44 mark of the 3rd. Simon Slavicek added the other assist on the tally. At 15:11, the Birds claimed a 4-3 lead when Amadeus Lombardi carried between two London rearguards and sniped a wide-angle shot over Brochu’s right shoulder for his ninth of the campaign, assisted by Gavin Hayes (Chicago Blackhawks).

Flint’s late lead only lasted two minutes. Out of a timeout with the net empty, Sean McGurn deflected home an Oliver Bonk shot in front of the net for his fourth of the year at 17:17. Ruslan Gazizov picked up the secondary assist on the tying goal.

It didn’t stay that way for long. 25 seconds later, Amadeus Lombardi cycled the offensive end and sent a puck back to the point. Marko Stojkov let it fly from there and it beat Brochu through a screen for his first career OHL goal to give the Firebirds a 5-4 lead at 17:42. London used their timeout and called Brochu to the bench for the extra skater one more time, but Ethan Hay blocked their first shot attempt and fired the puck the length of the ice for his fifth of the season, ultimately sealing Flint’s 6-4 triumph.

Flint outshot London 28-21 in the contest, and faceoffs ended at 28-27 to the Knights’ advantage. On special teams, the Birds scored two power-play markers on three chances and the Knights went 1-for-2.

Next Up: The Firebirds host the Knights on Saturday as this series returns to the Dort Financial Center for a 7:00 p.m. (ET) opening puck drop. Tickets for Saturday’s home contest are available now from ETIX HERE.