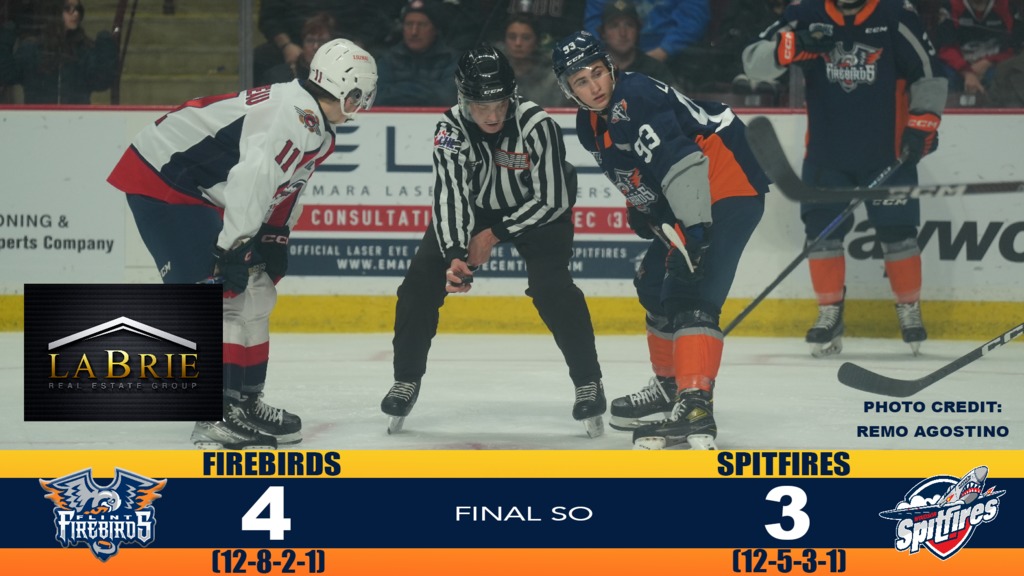 Windsor, Ont. – It was the first official game at the WFCU Centre for the Flint Firebirds since Game 7 of last year’s Western Conference Finals, and it was the Firebirds’ exacting revenge with a 4-3 win on Simon Slavicek’s winner in the fifth round of the shootout. Nathan Day got the start in net for Flint making 23 saves and it was Joey Costanzo for Windsor who made 29 saves for the Spits.

The Firebirds came out firing in this one and it didn’t take long for their work to pay off. On the game’s second shift, Tristan Bertucci sent one in from the point that Simon Slavicek deflected off Costanzo. The puck landed perfectly on Coulson Pitre’s stick in the slot and he buried it low to the blocker of Costanzo to make it 1-0 Flint 1:35 into the game. It was the former Spitfire draft pick’s ninth goal of the season.

Shots read 9-6 Flint after the first period and they went 0-for-1 on the only man-advantage of the opening 20. The Spits took care of business in the dot 10-9.

The Spitfires had the answer on the powerplay in the early stages of the middle stanza. Matthew Maggio (New York Islanders) and Ryan Abraham played catch below the goal line. Abraham came out from behind the net and looked to pass it back to the near post for Maggio. It deflected off a Firebird, right to the stick of Jacob Maillet who buried his eighth of the season at the 2:39 mark of the period.

Windsor had another answer at the midway point of the period. Abraham was ahead of the play and received a pass from Maggio at the Firebirds’ blue line. He skated into the far-side circle and quickly wristed one off Day’s glove and into the top corner to make it 2-1 Windsor 9:38 into the 2nd.

Braeden Kressler (Toronto Maple Leafs) had the answer for Flint late in the 2nd. Dmitry Kuzmin carried the puck up ice and cycled the zone. He curled and threw the puck in front of the net where Kressler got a stick on it to tip it bar down over the glove of Costanzo for his 12th of the year with just 2:58 remaining in the frame. Coulson Pitre picked up his second point of the game with the secondary assist.

The 2nd Period ended with a few huge breaks for the Firebirds. First, the Spits thought they had the go-ahead that was overturned after review due to offsides. Then with six seconds left in the period. Ethan Miedema was in front of the net on a cross-ice pass. Nathan Day dove across the ice to make the save with his paddle. The rebound slid across the goal line and Simon Slavicek dove to punch it out before it was covered up.

Dmitry Kuzmin (Winnipeg Jets) gave Flint the lead on a great individual effort early in the 3rd. He read a give-and-go at the Firebirds’ blue line to steal and give himself a breakaway chance. He slid by the defender on his way to the net, cut it to the backhand and slipped it five-hole for his fourth of the season 5:20 into the period.

Windsor pulled Costanzo with just over two minutes remaining to give themselves an extra attacker. With 1:02 remaining and an offensive zone faceoff it worked. Matthew Maggio kept the puck in at the blue line and let it fly. It beat Day through a screen and tied things up with 22.1 seconds remaining to send this game into overtime.

Nathan Day made a couple of big saves for the Firebirds throughout overtime to keep the game tied and the result would be determined in a shootout.

In the shootout, Day went a perfect 5-for-5 and it was Simon Slavicek winning things for Flint by going five-hole on Costanzo for the game-winning goal.

Final shots read 32-26 in favor of the Firebirds. They held the edge in the faceoff dot 34-31 as well. Windsor went 1-for-5 with the man advantage and Flint went 0-for-3.

Next Up: The Firebirds return to Flint Saturday to host the Sarnia Sting. Saturday’s contest is the Firebirds’ annual Teddy Bear Toss Night. Fans are encouraged to bring a new or gently used Teddy Bear to the game and throw it on the ice after Flint scores their first goal of the game. All collected Teddy Bears will be donated to local non-profits and charities such as Whaley Children’s Center, Hurley Children’s Hospital, Ennis Center for Children, the YWCA and many more. Tickets for Saturday’s home game are available now from ETIX HERE.