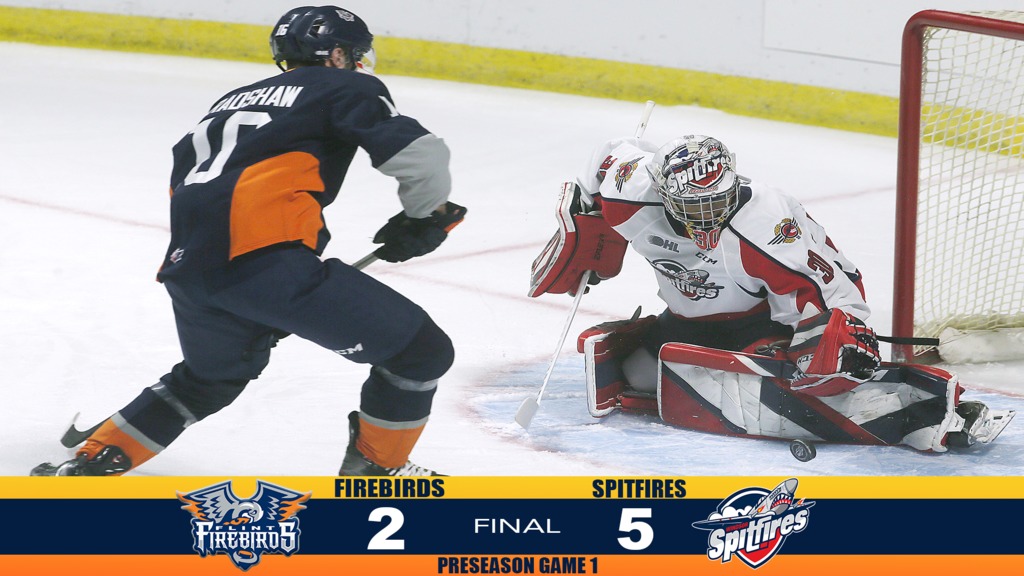 Flint, Mich. – It was exactly 100 days ago the Flint Firebirds and Windsor Spitfires concluded the Western Conference Finals at the WFCU Centre. The Firebirds suffered a 5-2 defeat in the exhibition opener with Alex Bradshaw and Amadeus Lombardi picking up the goals for Flint. Will Cranley made his Firebirds debut in net for Flint and it was Xavier Medina for the Spitfires.

The clubs traded goals in the first period, with the Spitfires getting on the board first. Coulton Smith found Alex Christopoulos breaking up the left-wing side of the neutral zone. With possession, Christopoulos hit the brakes to shake a defender before streaking toward the Flint net. He faked a forehand shot from the bottom of the left circle before carrying across the slot and depositing his first of the pre-season past Cranley at 1:46.

The Birds fought back, and Alex Bradshaw knotted the score on a breakaway play. Fresh off the bench on a line change, Bradshaw picked up a loose puck and carried in unabated. He launched a short wrister on Medina, but the veteran netminder made the initial save. Bradshaw collected his own rebound and scored his first in exhibition play at 11:50, unassisted.

The teams turned up the offense in the middle frame. Flint appeared to be in control for the first five minutes, but that changed quickly when Christopoulos sent a pass across the goal mouth to Matthew Maggio (New York Islanders) at the back door. Maggio directed the pass just inside the right post for his first of preseason on the power play at 5:14. Jacob Maillet picked up the second helper. Only 59 seconds later, Noah Morneau gathered a loose puck between the hash marks and sniped it blocker-side on Cranley for his first, assisted by Thomas Hebek and Liam Greentree.

Things settled down for the next 10 minutes as the goaltenders took over in the spotlight, both looking in midseason form. That only lasted until 17:42 when Ethan Miedema buried his second of the pre-season off a rebound from Daniil Sobolev’s (Montreal Canadians) shot. Maggio was credited with the second assist.

Amadeus Lombardi (Detroit Red Wings) netted his first in exhibition play with the man-advantage 54 seconds into period three. The setup pass from Luca D’Amato left him one man to beat, and Lombardi won the foot race to beat Medina on the ice glove side. The final tally was a deflection goal for the Spitfires, as Jacob Maillet scored off a tape-to-tape pass across the slot from Maggio at 11:09. Anthony Christoforo chipped in the second assist.

Final shots-on-goal ended at 37 for Windsor and 31 for the Firebirds. Both teams scored once on the power play, with Flint getting three chances to Windsor’s four. The Spitfires also outdrew the Birds 30-23 in the contest.

Next Up: The Firebirds return home to host Windsor Sunday evening at Flint Iceland Arena. Season Ticket Holders get in for FREE. All other General Admission tickets are just $10 each and parking is free. Puck drop is set for 4:00 p.m. (ET) this Sunday, September 11.