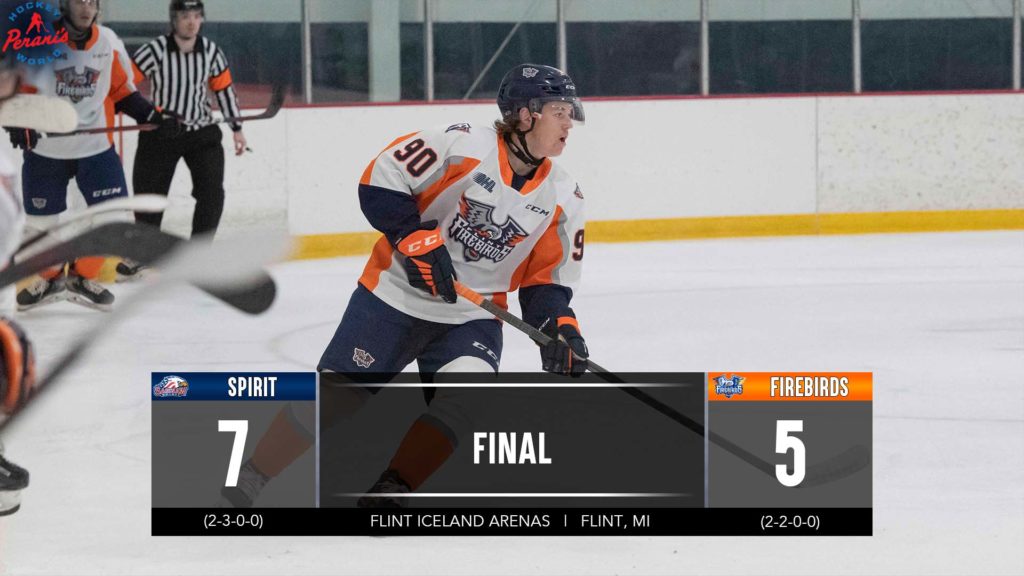 Flint, Mich. – The Firebirds wrapped up their four-game preseason schedule with an exciting preview of the 2021-22 I-75 Divide Cup rivalry with the Saginaw Spirit. In the end, Saginaw skated away with a 7-5 victory in front of a lively crowd at Flint Iceland Arena. Ty Petrou scored twice for Flint, and Sahil Panwar (1G, 1A), Zack Terry (2A), and Zacharie Giroux (2A) each recorded two points on the afternoon. For the Spirit, Camaryn Baber netted a hat trick and pitched in two helpers for a five-point affair. Flint’s goaltenders split time between the pipes, with first-year ‘tender Nathaniel Day making 15 saves on 18 shots in the first 30:38, followed by Ian Michelone who stopped 17 of 20 shots. Saginaw’s Brett Fullerton made 22 saves on 27 shots to earn the win.

The visitors from Saginaw logged the game’s first goal on a give-and-go across the slot while on the power play. Matyas Sapovaliv found Dean Loukus, who hails from Calumet, Mich., open in the left-wing circle. Loukes sent a pass through Flint’s defense to Josh Bloom (Buffalo Sabres) low in the right circle. Bloom one-timed the pass back across the slot to Loukes, who redirected the puck into the back of the net, low blocker side. It was Loukes’ second goal of the pre-season, scored at 15:42 of the opening frame.

Flint rallied back to tie the contest with 2:01 remaining in period one. Ethan Hay thwarted a clearing attempt by the Spirit and found Chesterfield, Mich. native Owen Pitters open in the right circle. Pitters ripped a wide-angle wrister that snuck behind the Saginaw netminder Brett Fullerton on the near side. The goal was Pitters’ first in a Firebirds’ jersey.

The first 20 minutes resulted in a 1-1 tie. Saginaw held the early edge in shots-on-goal by a margin of 10-7 after twenty minutes of play and potted one power-play goal on four attempts. Flint earned the man-advantage twice in the opening frame, but was unable to convert.

The Spirit struck early in the middle stanza on a breakaway just 13 seconds in. Bloom sprung Camaryn Baber free on a breakaway from the right point. As he traversed the slot he faked a forehand shot short-side, then utilized a backhander to net his second tally in preseason play. The second assist was credited to Pacey Schlueting.

Flint fought back to tie things up again at the 2:42 mark. Sahil Panwar lifted a short-range wrister just under the crossbar near-side on Fullerton from the left face-off circle. James Mayotte and Zacharie Giroux drew the assists.

The clubs would once again trade a pair of goals in the sixth minute. Saginaw’s Camaryn Baber fired a slap shot from above the right circle that was deflected wide of the cage. The rebound slid into the goal crease to the right of goaltender Nathaniel Day. Sebastien Gervais gathered the loose puck and tucked it just inside the near post for his first marker with the Spirit at 5:11. Saginaw, Mich. native Mitchell Smith picked up the second assist. Then the ‘Birds converted on their first power play of the second period to tie the game at three at the 5:43 mark when Ty Petrou lit the lamp for the first time in his OHL career. Zacharie Giroux and Zack Terry were credited with the assists.

Flint swapped goaltenders during a stoppage with 9:22 remaining in the second. Ian Michelone relieved Day, as is common in preseason play.

Flint claimed their first lead of the contest at 11:35 of the middle frame. Gavin Hayes emerged on a breakaway up the left-wing side from the blue line in and utilized a rising wrist shot that struck paydirt over Fullerton’s right shoulder. Sahil Panwar and Zack Terry each earned their second point of the afternoon with the assists. However, with only 40 seconds remaining in the middle frame, Baber logged his second of the day to knot the score at four. Russian defender Pavel Mintyukov was credited with the helper.

Saginaw outshot the Firebirds 17-11 during the second period, but Flint was able to record the only power-play tally of the period.

The intensity picked up for the third period, with both clubs creating scoring chances in fast-paced end-to-end action. It was the Firebirds though who gained their second lead of the contest with the second tally off the stick of Ty Petrou. Riley Piercey made a rink-wide backhand pass to the streaking Petrou, who sniped the upper left corner of the goal from atop the left faceoff circle, beating Fullerton high blocker side at 5:27 of period three giving the Firebirds a 5-4 lead.

The Spirit would fight back once more to tie the game at five at the 11:12 of the third frame with a deflection in front of Michelone. Nick Wong made the initial pass up the left-wing boards to Calem Mangone at the left point. Mangone blasted a heavy shot from just inside the blue line that was tipped by Roberto Mancini in the low slot. The deflection raised the puck up and over the outstretched Flint netminder.

Saginaw reclaimed the lead once more on the power play at 12:20 with Camaryn Barber’s hat-trick tally making it 6-5 Spirit. Baber pounced on a loose puck in the low slot and directed it past a pair of Flint defenders and Michelone for his third goal of the night and fourth of the preseason.

With 1:27 remaining in regulation Flint’s new Head Coach Ted Dent called a timeout and gathered the troops at the bench. Moments later he called Michelone off the ice for the extra attacker. However, Saginaw was able to capitalize on the empty net in the final minute to secure the 7-5 victory for the visitors. Nick Wong scored the final goal at 19:05, assisted by Sapovaliv and Baber.

Final shots-on-goal favored the visitors 39-27. Flint finished with the edge in face-offs, winning 38 draws to Saginaw’s 33. On special teams, the Firebirds went 1-for-5 on power-play opportunities, while allowing two goals in seven short-handed situations.

Next Up: The Firebirds home opener is next Saturday, October 9th at 7:00 p.m. as they welcome back the Erie Otters and return to the Dort Financial Center for the first time since the 2019-20 season. Tickets are on sale NOW here: ETIX