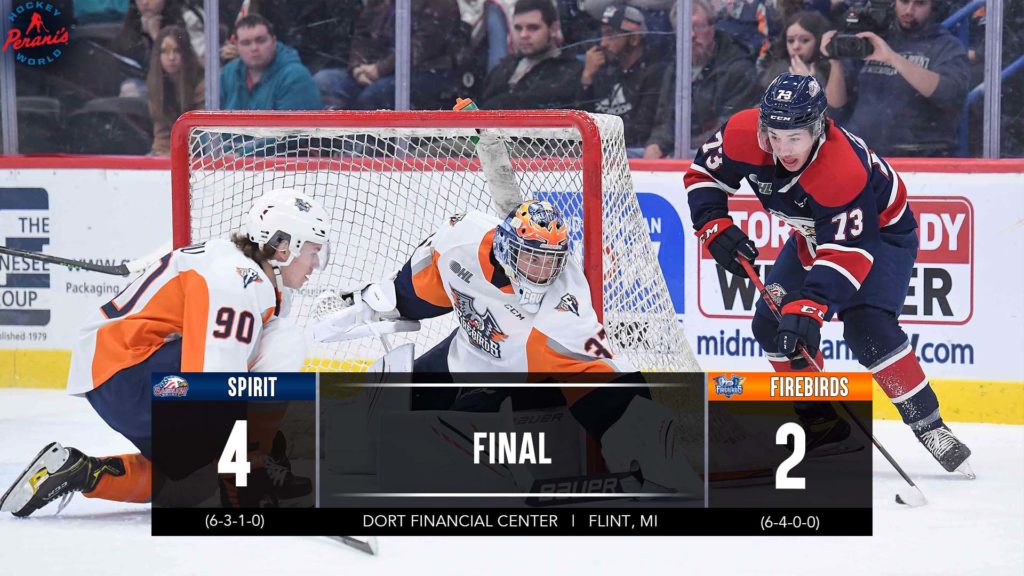 Flint, Mich. – The Firebirds and Spirit played another close game at the Dort Financial Center Friday night in front of more than 2,400 fans. The visitors from Saginaw came out on top by a final of 4-2. With the victory, Saginaw claimed a 3-0 lead in the 12-game I-75 Divide Cup rivalry series, presented by Coors Light. For Flint, Sahil Panwar scored his first goal of the season and Zacharie Giroux potted his fourth. The visitors were led by Camaryn Baber’s two tallies, followed by Nick Wong and Josh Bloom (Buffalo Sabres) chipping in one goal each. Between the pipes, Luke Cavallin made 29 saves on 32 shots and the New York Islanders’ prospect Tristan Lennox stopped 23 of Flint’s 25 shots to earn his fourth victory of the campaign.

Saginaw scored the lone goal of the opening frame at the 3:42 mark. Luke McNamara carried the puck up the left-wing boards in front of Flint’s bench. As soon as he crossed the blue line into his offensive zone, a Flint defender stopped him along the wall. McNamara spun around and completed a backhand pass to overeager Nick Wong at the top of the left circle. Wong used one motion to control the pass and advance a quick shot that snuck past Cavallin high to the glove side. The goal was Wong’s fifth of the season, assisted by McNamara and Roberto Mancini.

During the balance of the first 20 minutes, there were two excellent scoring opportunities on both ends of the ice. First, a close-range shot found its way past Cavallin, but defenseman James Mayotte came to the rescue and swept the puck aside before it crossed the goal line. The play was reviewed and the officials confirmed that it was not a goal. Then, near the midway point of the first, Brennan Othmann (New York Rangers) and Braeden Kressler (Toronto Maple Leafs) emerged on a two-on-zero breakaway on Saginaw netminder Lennox. The Firebirds’ duo made two passes after crossing the blue line, resulting in a wide-angle shot from in close that Lennox was able to stop with his right pad. First-period shots were 15-8 in favor of the Spirit, and Flint won 12 of 20 faceoffs. Both teams were unable to convert after one power-play opportunity per side.

The second period started with a shift of momentum in favor of the home team. The Firebirds tied the game and then took the 2-1 lead within the first four minutes of play. First, while on a power play, Tyler Deline launched a slapshot from the left point that Lennox was able to save. Riley Piercey found the rebound to the right of Lennox and passed across the top of the crease to Zacharie Giroux, who completed the back-door play for his fourth of the season at 3:28.

Only 30 seconds later Ty Petrou made a breakout pass up the left-wing wall to Michael MacLean who was playing in just his third OHL game. MacLean fired a long-range shot on net that hit a Saginaw defender and fell to the ice in the high slot. Sahil Panwar pounced on the loose puck a rocketed a heavy shot that found twine for his first of the campaign, logged at 4:00.

The Spirit evened the score again at 9:37. Saginaw, Mich. native Mitchell Smith leaned into a heavy shot from the right point that Cavallin blockered aside. Camaryn Baber was perched in the slot and quickly backhanded the rebound far-side under the Flint netminder’s right pad for his first of the season.

Second-period shots ended 11-8 to Saginaw’s advantage. Flint again held the edge in faceoffs 14-10. The Firebirds scored one second-period goal on four chances with the man-advantage against the league’s top-ranked penalty-kill and killed off their lone penalty successfully.

Saginaw scored the go-ahead goal 1:58 into the third period. Luke Cavallin made two quick saves back-to-back, one from his right and then from his left, before Baber collected the second rebound and beat the sprawling netminder through traffic for his second of the night. PJ Forgione and Grand Blanc, Mich. native Dalton Duhart were credited with the assists.

Flint called a timeout with 2:21 remaining in the game, and then pulled Cavallin to the bench for the extra attacker near the two-minute mark. In the end, a deflected pass in the Firebirds’ offensive zone resulted in Josh Bloom (Buffalo Sabres) all alone for the easy empty-netter with 1:25 remaining on the regulation clock. Bloom’s empty-net goal was his seventh marker of the season, extending his point streak to eight games (7 G, 6 A). Dean Loukus and Mancini picked up the helpers. Saginaw finished with more shots by a 33-25 margin. Flint finished ahead in faceoffs 31-26.

Next Home Game: The Firebirds return to home ice Saturday night to host the Kitchener Rangers for the first time this season. Puck drop is scheduled for 7 p.m. (ET). Tickets are on sale NOW here: ETIX.