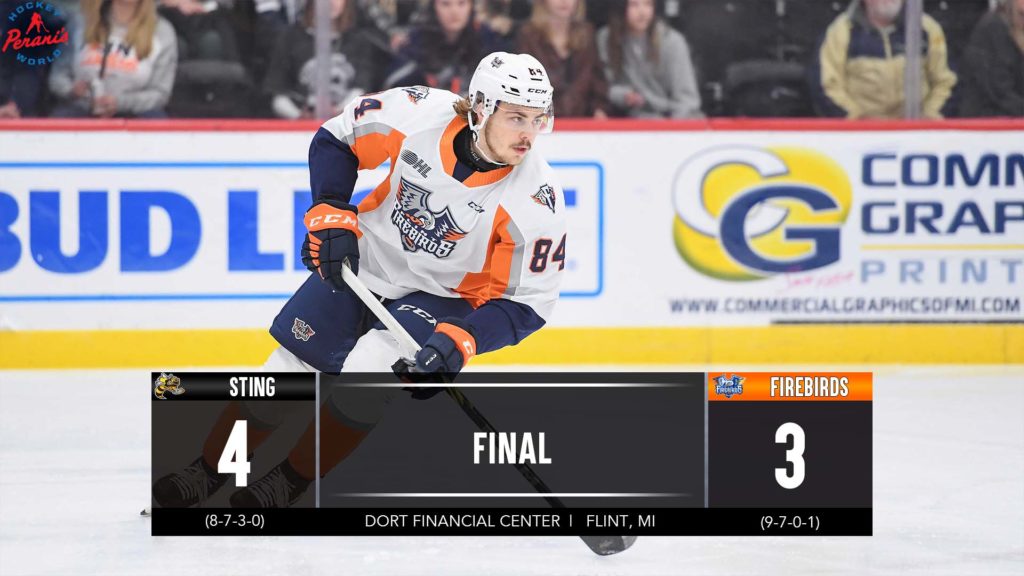 Flint, Mich. – The Firebirds fell just short of winning their third game of the week, surrendering a 4-3 decision to the Sting in a high-spirited chippy tilt Saturday night. Zacharie Giroux scored his third goal of the week, Tyler Deline found paydirt with his third tally, the most of any defenseman on the roster, plus added an assist for two points, and Brennan Othmann (New York Rangers) had his second consecutive three-point game (1 G, 2 A). Luke Cavallin made his fourth start of the week in the net, stopping 32 of 36 shots faced. Across the ice, Benjamin Gaudreau (San Jose Sharks) made 27 saves on 30 shots to earn his sixth victory of the season. Ethan Ritchie, Ty Voit (Toronto Maple Leafs), Nolan Dann, and Theo Hill all tallied for the Sting.

Just like last night when these teams met in Sarnia, Flint took the early lead. James Petrovski made a breakout pass from deep in his defensive end to Brennan Othmann in the neutral zone. Othmann made a short drop-pass to Giroux who was on the gas pedal up the left-wing boards. With a defender in tow, Giroux launched the puck high and found twine just under the crossbar on the blocker side for his seventh of the season at 11:18.

Then, just like last night, the Firebirds went on the power play with under a minute remaining in the opening frame. However, unlike last night, they didn’t wait until the carryover penalty time in the second period. This time, Tyler Deline rifled the puck low and into traffic from just inside the blue line. Both Giroux and Bertuzzi were in the path, but the puck found its way past Gaudreau. It was Deline’s third of the season, logged at 19:20. Othmann and Gavin Hayes earned the assists.

Flint headed to the locker room with a 2-0 lead over the Bees. The Birds also outshot Sarnia by a margin of 12-9 and dominated the faceoff circles by winning 9 of 12 first-period draws. On special teams, Flint converted on one-of-two chances with the man-advantage and avoided the penalty box altogether.

Aggression grew quickly in the second period and finally reached its boiling point just over two minutes in. Riley Piercey and Ryan Price met at the center faceoff dot sans gloves to discuss the physicality of the play. Both were awarded five-minute majors for their efforts.

The boost of momentum appeared to favor the visitors from Sarnia, as they went on to score two-straight goals and tie the contest. First Ethan Ritchie scored his first in a Sting jersey and second of the season on a mid-height wrister to the blocker side of Cavallin from the right-wing circle. Rookie Ben Lalkin was credited with the lone assist on the goal, logged at 10:27 of the middle frame. Next, at 12:09 Ty Voit tallied his seventh of the campaign, assisted by Ritchie and Nolan Burke.

Second-period shots were 15 for Sarnia and eight for the Firebirds. Faceoffs were nearly even with the 10-9 advantage going to Flint. Both teams went scoreless with one power-play chance.

Sarnia’s momentum carried over into the third period, and they lit the lamp twice quickly. Nolan Dann scored first at 0:54 to extend his point streak to 11 games.  Voit and Burke were credited with the assists. At the two-minute mark, Theo Hill bagged his sixth of the season on the coattails of a diving save by Cavallin. The rebound went right to Hill for a quick redirection before the Flint netminder could get back to his feet. Ryan Mast (Boston Bruins) and Nolan DeGurse picked up the helpers.

The Birds weren’t done. They needed less than 30 seconds of a five-on-three power play to convert and pull within one. Brennan Othmann set up shop in the right-wing circle where he tends to quarterback the power plays from. Piercey sent him the puck, Othmann sent it to Deline centered high inside the blue line, and the alert rearguard sent it immediately back. Othmann was wound back and blasted a one-timer that snuck in behind Gaudreau for his 14th of the season at 9:16.

Head Coach Ted Dent called a timeout with just under 90 seconds on the clock and called Cavallin to the bench for the extra attacker. Flint cycled the puck well and generated several quality shots over the final minute-and-change of the game. Gaudreau and his defense combined to stop several shots and preserve the 4-3 victory on the road.

In total, Flint scored two power-play markers on six chances while holding the Sting scoreless on three attempts. The Birds also won 26 faceoffs to Sarnia’s 21. Final shots-on-goal favored the visitors by a margin of 36 to 30.

Next Home Game: The Firebirds return to home ice Wednesday, December 8 for another battle with the Erie Otters. Puck drop is scheduled for 7 p.m. (ET) at the Dort Financial Center in Flint. Tickets are on sale NOW here: ETIX.