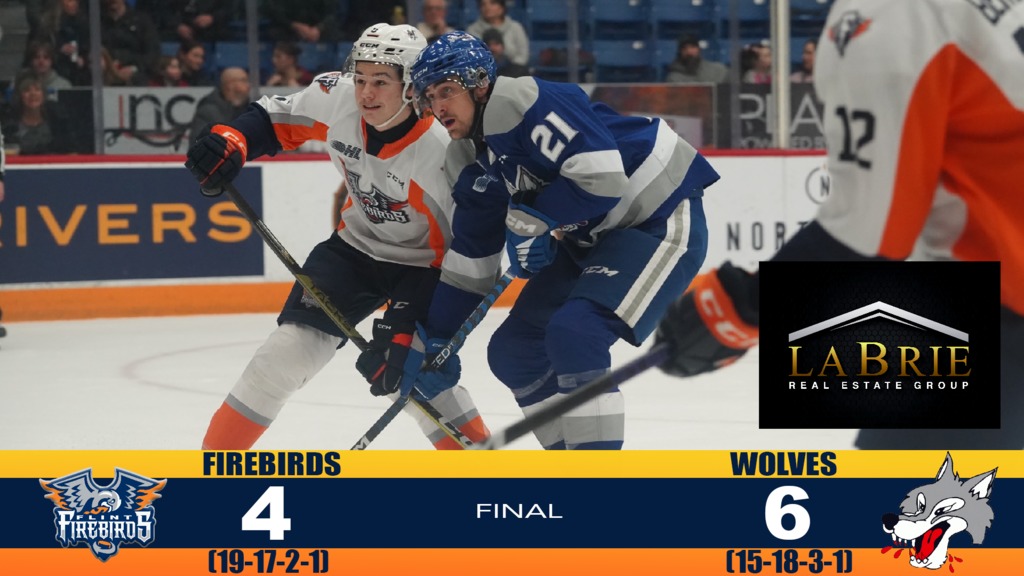 Sudbury, Ont. – The Firebirds were outshot all night in Sudbury on Friday, but still managed to lead 2-0 after one and 4-1 after two. From there the Wolves would score five unanswered in the final frame to pick up the eventual 6-4 decision. Coulson Pitre lit the lamp twice for Flint, while Braeden Kressler and Dmitry Kuzmin each chipped in two assists. Nathan Day made his 15th appearance in goal for Flint, turning aside 33 of 38 shots faced. For the Wolves it was Kevyn Brassard getting the start, and then Nate Krawchuk stepping in for the relief effort. Krawchuk was credited with his third OHL victory after turning aside 15 of 17 shots against.

In the first eight minutes of play, the Wolves outshot the Firebirds 9-1. However, it was Flint with the 1-0 lead early. On the game’s first power play, Tyler Deline sent a breakout pass to Gavin Hayes in the neutral zone. Hayes fed Braeden Kressler on the right-wing side as he gained zoned entry. Kressler carried it to the bottom of the right circle before wrapping the puck back into empty space between the circles. Hayes leaned into a heavy shot that lit the lamp for his 23rd of the season at 3:18.

The Birds’ second shot on net also found twine, this time off the stick of Coulson Pitre. His wrist shot from the top of the left circle into traffic found its way past Brassard at 8:46 for his 14th of the campaign. Amadeus Lombardi and Dmitry Kuzmin combined with the assists.

Nate Krawchuk took over backstopping Sudbury after the Birds went up 2-0, and he didn’t allow another tally in the frame. First-period shots ended at 15-8 in Sudbury’s favor, and they outdrew the Firebirds 14-8 through the opening 20 minutes. The Birds scored on their lone power play while holding the Wolves scoreless in two chances.

In the sixth minute of the middle frame, Riley Piercey carried up the right side of Sudbury’s zone before making a short backhand pass to Coulson Pitre skating up through center. From between the hash marks, Pitre snapped a quick shot that found twine for his second of the night at 5:34. Piercey combined with Kuzmin for the helpers.

With Flint on a power play near the midway point of the contest, a mishandled puck in the defensive zone led to Nick DeGrazia skating across the slot all alone. While Day committed to the initial shot-fake, DeGrazia held carried to the far side on Day’s left and backhanded the puck out of reach for his 15th of the season. Nolan Collins and Landon McCallum assisted on the play, with the goal recorded at 9:58.

Next, Tyler Deline centered the puck from the right-wing wall in the neutral zone and hit a streaking Zacharie Giroux sprinting up the middle. Giroux was able to carry all the way to the high slot before sniping a shot over the right shoulder of Krawchuk for his 14th of the campaign in front of his hometown fans. Braeden Kressler joined Deline with the assists at 13:07, giving Flint a 4-1 edge.

Once again the Wolves held the advantage in shots, this time by a margin of 12-5. Flint earned the 40-minute edge in faceoffs 22-21. Neither team could find paydirt with the man advantage in the center stanza, with the Firebirds ending 0-for-2 and the Wolves going 0-for-3 in the frame.

Sudbury buried an early even-strength tally to start the third period, needing only 1:43 to cut their deficit to a pair. Dylan Robinson won a battle along the left-wing half wall and passed to Alex Pharand centered between the circles. Pharand backhanded it to DeGrazia near the right-wing faceoff dot for a quick one-timer that went over Day’s left shoulder and in for his second of the night.

Back-to-back markers by Sudbury near the midway point of the third period would knot the score at four. First, it was Kocha Delic burying his 13th from the bottom of the right circle, assisted by Robinson and Landon McCallum at 9:12. Then Matthew Mania danced around three defenders from the center faceoff dot the slot before depositing his seventh of the year low to the blocker side at 10:07. Evan Konyen picked up the lone helper.

With the clubs still tied 4-4 in the final minute of play, Andre Anania launched a quick shot from the right point that went past a pair of bodies in the slot and was tipped in front by David Goyette. The deflection put the puck into the top corner, far-side with 49 seconds remaining for Goyette’s 26th.

Nathan Day was called to the bench for the extra attacker after the next faceoff but to no avail. Marc Boudreau found the empty cage with under two seconds in regulation to seal the 6-4 win for the home team. Final shots were 39-19 for the Wolves, with Flint edging them out in faceoffs 31-29. The Birds’ one power-play marker in the first period stood as the lone goal with the man advantage for either side, and both teams had five chances.