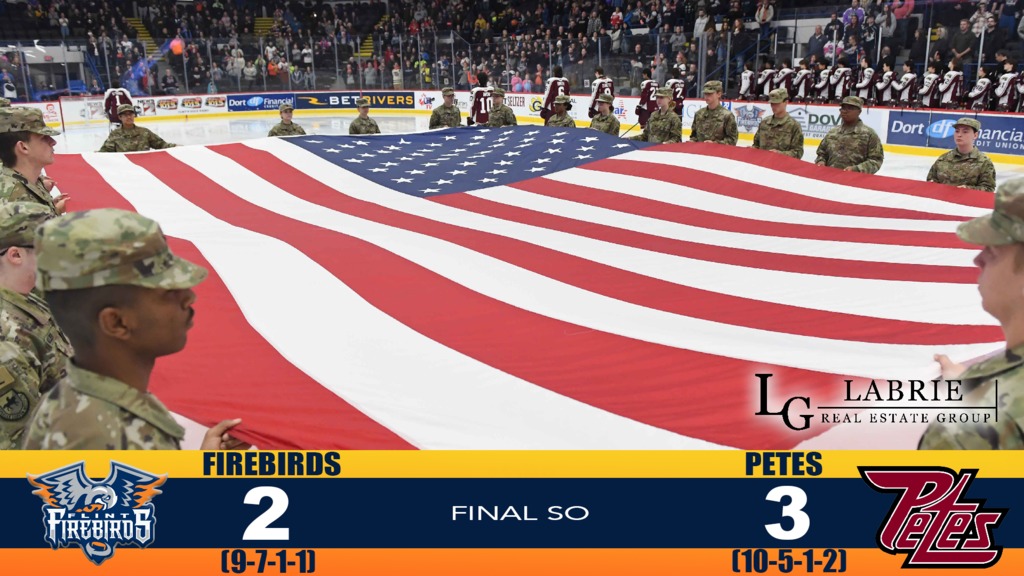 Flint, Mich. – The Firebirds rallied from behind to tie the visiting Peterborough Petes 2-2 in the third period, and eventually falling 3-2 in the shootout. With the point, Flint now has points in four-straight contests. Amadeus Lombardi (Detroit Red Wings) and Simon Slavicek were the goal scorers for the Firebirds. Will Cranley (St. Louis Blues) backstopped the Birds once again in game number 15 between the pipes and posted 37 saves through 65 minutes of play. Peterborough opted to go with Liam Sztuska, appearing in his fifth contest of the season and earning his third victory with a 36-save performance.

The Firebirds wasted no time getting a jump on a higher-ranked opponent, lighting the lamp within the first minute of regulation. Luca D’Amato settled a loose puck behind the Flint net and slid a pass to Amadeus Lombardi (Detroit Red Wings) below the goal line to the left of Cranley. Lombardi carried the puck coast-to-coast and turned on the afterburners once inside the offensive zone. From the bottom of the left-wing circle, he lifted a wide-angle wrister that deflected off the back of Sztuska’s right shoulder and bounced into the net at 0:42.

Flint carried the 1-0 lead into the first intermission. Shots favored the Petes 16-14, but the Birds won more faceoffs by a margin of 8-7. Flint’s penalty-kill units got the job done twice, successfully killing off both minors taken.

The Petes would score back-to-back goals 50 seconds apart early in the middle frame to capture their first lead of the night. First Chase Stillman (New Jersey Devils) fed former Firebirds’ overager Sahil Panwar across the circles for a quick one-timer at 2:48. J.R. Avon (Philadelphia Flyers) had the second assist on Panwar’s third of the season. Then, seconds later, an unusual bounce of a stanchion on the right-wing wall led to Tucker Robertson (Seattle Kraken) getting an open look on the net. With one defender in two, he snapped a quick shot 5-hole that trickled in for his ninth of the campaign at 3:38. Justin DeZoete was credited with the lone helper.

Peterborough led 2-1 after 40 minutes were in the books. Shots in the second period favored the Petes 11-10. Flint had the lone power-play opportunity but was unable to convert.

The Firebirds continued to battle in the final frame, showing no signs of letting off the gas. In the ninth minute of play, defenseman Tyler Deline queued up a slapper just inside the center of the offensive blue line. Sztuska made a pad save, and Ethan Hay attempted a second shot off the rebound. Sztuska made another pad save, as he kicked the puck out to his right. This time Simon Slavicek was in the right position to one-time rebound the puck behind the Petes’ netminder for his third of the campaign at 8:11.

With the game still tied at a pair, the Petes were called for a tripping minor at 18:15. Flint utilized their timeout before play would resume. Despite generating a few shots on the Peterborough net, the full 60-minute regulation expired. Shots were knotted at 34 per side and faceoffs were still to the Petes’ advantage 33-25. Overtime would begin with Flint on a brief carryover power play, which was unsuccessful.

The overtime was a display of solid defense and brilliant goaltending by both squads. Each club generated four shots on goal, but the shootout was necessary to decide the final outcome. It was J.R. Avon in the fourth shootout round that sealed the road victory for the Petes 3-2.

Next Up: Flint heads out for a two-game road trip beginning in Sault Ste. Marie on Wednesday. Next, they’ll visit the Knights in London, Ontario Friday before returning home to the Dort Financial Center for a Saturday night rematch against London. Tickets for Saturday’s home contest are available now from ETIX HERE.