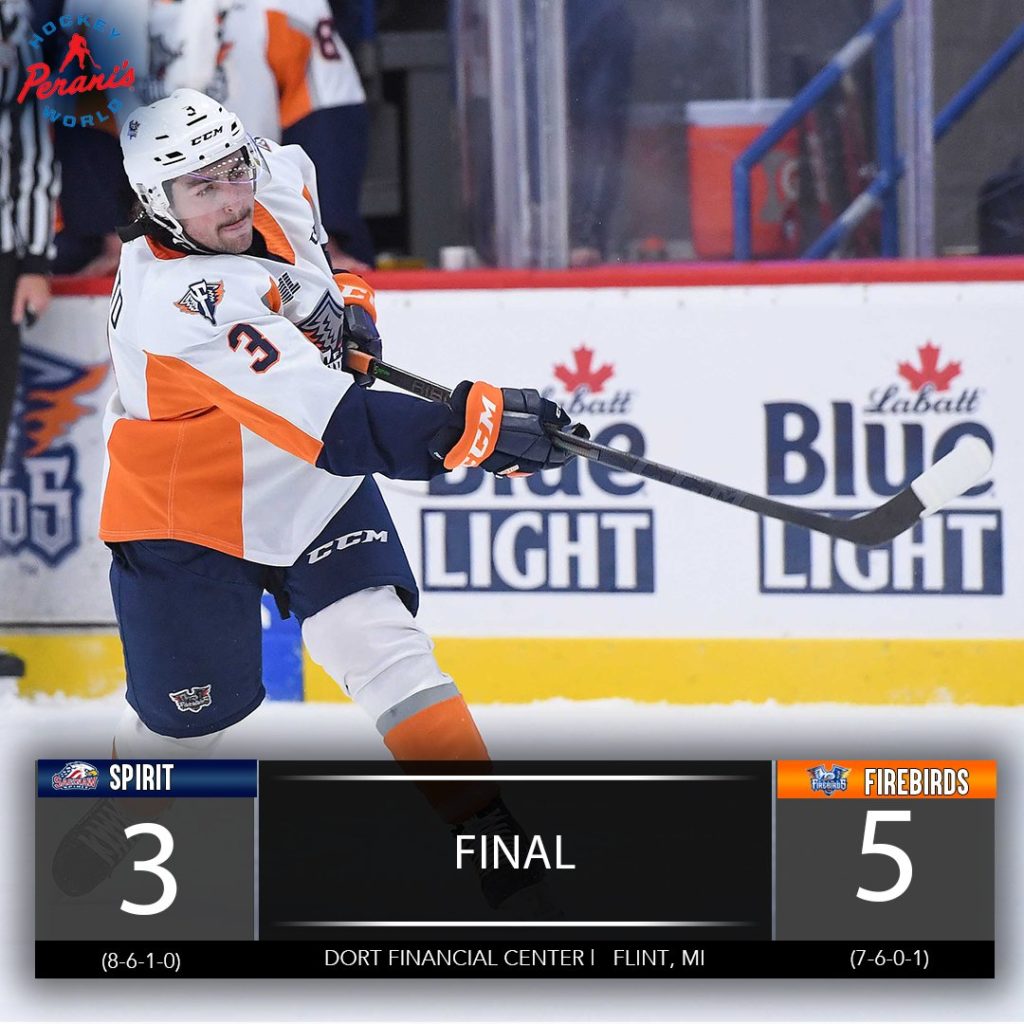 Flint, Mich. – The Firebirds finally snapped Saginaw’s win streak in Flint at ten games, dating back to the Firebirds’ last home win versus the Spirit in overtime on January 31, 2018. For the Firebirds, Gavin Hayes netted his first two goals of the season. Ethan Hay and Sahil Panwar also lit the lamp, Zacharie Giroux bagged the empty-netter to secure the victory, and Riley Piercey posted two points in the contest (2 A). Matyas Sapovaliv led the way for the Spirit, scoring twice, and Pavel Mintyukov finished with a goal and an assist. Luke Cavallin made 30 saves on 33 shots-faced for his seventh victory of the campaign in his 100th career OHL games. Across the ice, Andrew Oke made 26 saves on 30 shots.

Flint broke the scoreless tie only 2:22 into the contest. Gavin Hayes gathered a loose puck in the neutral zone and hit Riley Piercey on what appeared to be an all-out breakaway. However, Hayes showed a burst of speed to pass the lone defender and create a 2-on-0 rush up-ice. Piercey faked a shot in the slot and slid the puck to his right, where Hayes quickly lifted it top-shelf glove-side for his first career OHL goal.

Saginaw tied the game on a shorthanded two-on-one break in the opposite direction. Dean Loukus deflected a Flint pass in the neutral zone and streaked past his defender to corralled the loose puck. As the defender caught him from behind, Loukus slid the puck to his left, leaving it for Matyas Sapovaliv inside the left-wing circle. Sapovaliv sniped the top shelf, near side for his third of the season, logged at 12:59 of the first period. The assists were credited to Loukus and Pacey Schlueting.

Then, Dmitry Kuzmin (Winnipeg Jets) gathered a loose puck in his defensive zone and carried it himself across both blue lines. At the top of the right circle, he made a back-to-front between-the-legs move that shook the defender and created space for a late backhand shot on net. Oke kicked the shot into the crease, where Ethan Hay one-timed it under Oke for his second of the campaign at 16:04.

After 20 minutes of play, the Firebirds headed to the locker room with a 2-1 lead. Shots-on-goal were 12-6 to Saginaw’s advantage. The Spirit also held the edge in faceoffs 12-9 in the opening frame.

The ‘Birds lead was extended to a pair at the 8:36 mark of the second period. Sahil Panwar received a short-range pass from defenseman James Mayotte in the left defensive corner, and carried the puck coast-to-coast, shaking two defenders in the process. From the inner edge of the right circle, he sniped a shot into the top corner, glove-side for his third of the season.

The Spirit rallied back to pull within one later in the middle frame. Rearguard Brayden Hislop passed the puck from the left faceoff dot to Sebastian Gervais centered just inside his blue line. Gervais set up Pavel Mintyukov for the one-timer from the right faceoff dot. Cavallin got a glove on the shot, but it wasn’t enough to stop it from trickling across the goal line for Mintyukov’s second of the season at 15:51.

Gavin Hayes lit the lamp for the second time less than a minute later to reclaim the two-goal lead. Riley Piercey received a deflected pass along the half-boards in his defensive end. He hit Hayes with a breakout pass at center ice with a stride advantage on his defender. The right-hander shot across his body to strike paydirt just inside the far post above Oke’s pad but below the blocker. The goal was logged at 16:31.

Flint held the 4-2 lead after 40 minutes. The second-period shot clock showed Flint with the 15-9 advantage. Flint won one more faceoff than the Spirit in the middle frame, finishing with the 10-9 edge.

Saginaw only needed a minute of third-period play to pot their third goal of the night, this time on the power play, and once again off the stick of Sapovaliv. Josh Bloom (Buffalo Sabres) took the initial shot from the right point, which was saved by Cavallin. The rebound slid into heavy traffic in the crease, where Sapovaliv was able to poke it underneath the Flint netminder at 1:04, assisted by Bloom and Mintyukov.

Saginaw used their one timeout with 2:22 remaining in regulation and then pulled Oke for the extra attacker with 2:09 to go. However, Brennan Othmann (New York Rangers) picked the pocket of a Spirit defender and centered the puck for a wide-open Zacharie Giroux skating between the circles. Giroux buried the empty-netter for his fifth of the season at 18:48.

The Spirit outshot the ‘Birds 33-31 during the game. Faceoffs were also in Saginaw’s favor by a margin of 32-28. On special teams, Flint was scoreless in four power-play opportunities against the OHL’s top-rated penalty kill. Saginaw scored once on three chances with the man-advantage.