Firebirds Even the I-75 Divide Cup Series at Four, Defeat Spirit 5-2 in Saginaw 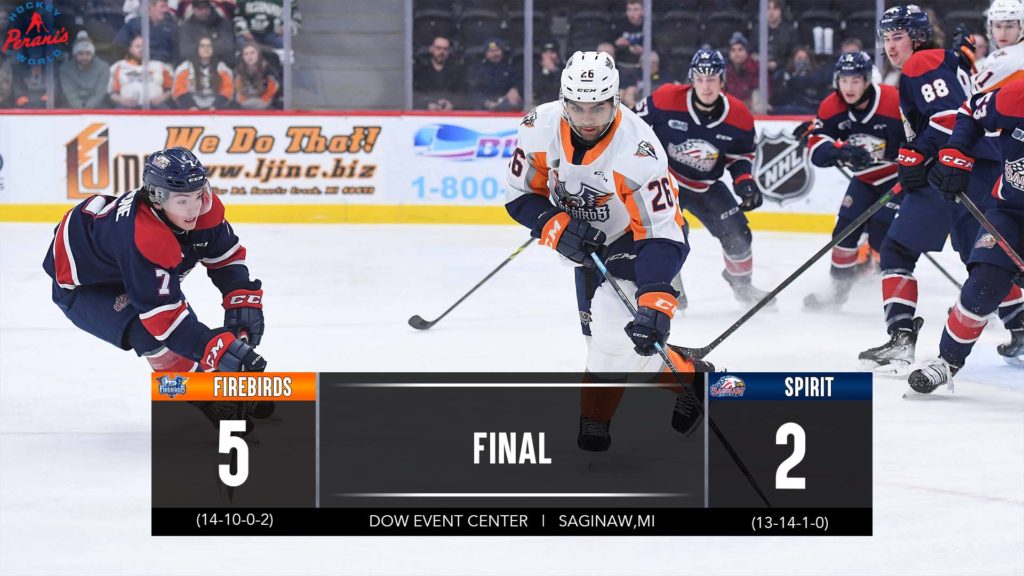 Saginaw, Mich. – After dropping a close game in the shootout to their in-state rivals Wednesday night, the Firebirds came out on a mission Saturday night in Saginaw. Flint scored three straight to take the early lead and never looked back. Sahil Panwar and Amadeus Lombardi led the way for Flint, with each scoring a goal and adding two assists. Brennan Othmann (New York Rangers) netted his 21st of the season and picked up a helper in the tilt. Samuel Assinewai and Ethan Hay also found twine for the visiting club. Sebastian Gervais and Mitchell Smith recorded the markers for the Spirit. Between the pipes, Luke Cavallin backstopped his club to the victory with 33 saves on 35 shots to earn his 10th win. Andrew Oke stopped 18 of 22 shots-faced for Saginaw.

Despite being outshot 12-8 through the opening 20 minutes, Flint potted both goals of the opening 20 minutes. The first scoring play was initiated by Coulson Pitre shooting from high between the circles. The shot hit a defender in front and fell to the ice in the slot. Sahil Panwar pounced on it and slid a pass to Brennan Othmann at the left of the crease. Othmann snapped a quick one-timer, near-side, for his 21st of the season at 8:38. Next was a power-play tally, initiated by a breakout pass from Panwar to Pitre rushing up the right-wing side of the neutral zone. He carried across the blue line with Amadeus Lombardi pacing to his left. The two-on-one developed, and Pitre carried far-right to earn the commitment of the lone defender and Spirit netminder. He rifled a pass across the goalmouth to Lombardi for the back-door play. It was Lombardi’s 11th goal of the season, and second, on the man-advantage, logged at 11:00.

First-period faceoffs were even at eight per side. Flint scored on their only power-play opportunity while holding the Spirit at bay on two chances.

Early in the second period, Flint took consecutive penalties, resulting in 1:30 of 5-on-3 power-play time for the Spirit. Flint won all three faceoffs during the overlap, and Cavallin made a pair of key saves to keep Saginaw off the scoreboard. Minutes later, Lombardi won a scrum in the left-wing corner and emerged with the puck. He found Dmitry Kuzmin (Winnipeg Jets) at the left point. The rearguard launched a high shot toward the net, and Panwar tipped it from the inner edge of the left circle. The redirection beat Oke for Panwar’s fifth of the season at 5:14.

Flint held the 3-0 edge through the balance of the second period. The Spirit outshot the Birds again, by a 14-9 margin in the second. The Firebirds won 11 of 16 faceoffs and killed off both penalties-taken with success. Flint was 0-for-1 with the man-advantage.

Saginaw found their way onto the scoreboard at 2:35 of the third period off the stick of Sebastian Gervais, with the assists going to Evan Klein and Nick Wong. A bad bounce led to a puck in the corner that Klein rifled across the slot to Gervais who beat Cavallin by a split second on his glove side.

Four minutes later, Lombardi carried behind the Spirit cage and hit the brakes. He made a short, quick pass to Samuel Assinewai immediately to the left of the Saginaw netminder. Assinewai one-timed the puck between Oke’s skate and the near post for his third of the season at 6:42. Simon Slavicek earned his first point in his second game as a Firebird, earning credit for the second assist on the marker.

Flint held on to the 4-1 lead for the majority of the third period. That is until Matyas Sapovaliv set up shop behind Cavallin and sent the puck between the circles to defenseman Mitchell Smith for the one-timer. Smith’s third was assisted by Sapovaliv and Pacey Schlueting scored at 15:07.

Trailing by two late, the Spirit called Oke to the bench for the extra attacker near the 18:20 mark. Despite a couple of good scoring chances for the home team, Flint finally found the empty net with 6.4 seconds remaining in regulation, off the stick of Ethan Hay (3) and assisted by Othmann.

Final shots on goal were 35-23 to Saginaw’s advantage. Faceoffs ended nearly even, with Flint finishing with a 26-25 lead. On special teams, the Birds went 1-for-3 while holding the Spirit at bay on five power-play opportunities.

Next Home Game: The Firebirds will return home to host the Guelph Storm next Wednesday, January 5. Puck drop is scheduled for 7 p.m. (ET) at the Dort Financial Center. Tickets are on sale NOW here: ETIX.