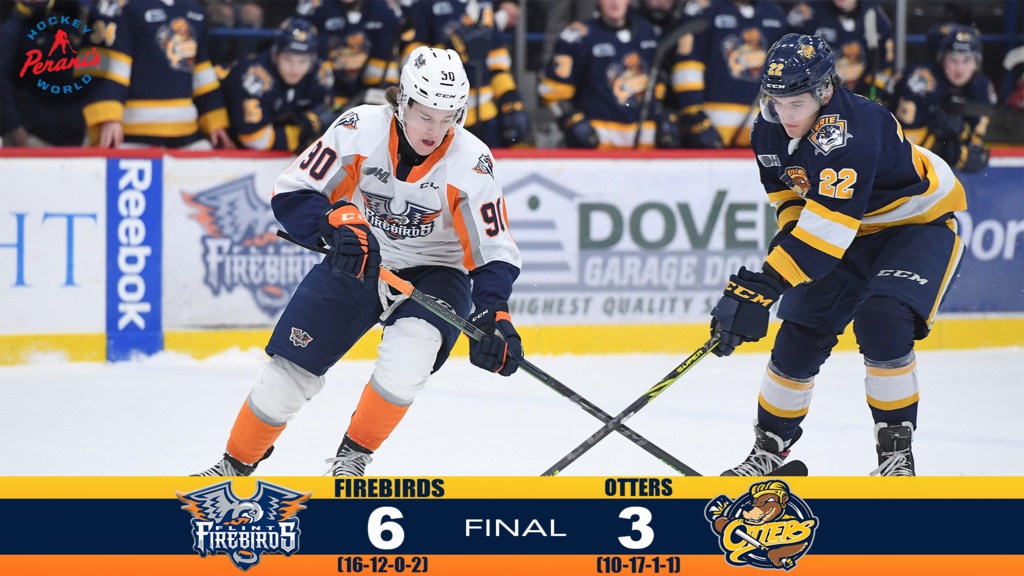 Erie, Penn. – The Firebirds improved to 7-0-0-0 versus Erie this season and won their ninth consecutive game over the Otters dating back to the 2019-20 season on Thursday. Luke Cavallin played stellar between the pipes, making 43 saves on 46 shots and earning ‘Second Star’ accolades for his effort. Coulson Pitre and Zack Terry led the offensive charge for Flint with two goals each. Pitre was named ‘First Star’ and Terry was awarded ‘Third Star’ honors. Brennan Othmann (New York Rangers) and Tag Bertuzzi were Flint’s other goal-scorers. For the Otters, Connor Lockhart, Colby Saganiuk, and Brendan Sellan scored for Erie, and Nolan Lalonde made 31 saves in the game.

These teams both came out playing like it was game seven in the playoffs. Connor Lockhart (Vancouver Canucks) put the hometown Otters on the boards just 33 seconds into the game, one-timing a pass from Christian Kyrou past Cavallin for his tenth of the season. Kyrou and Noah Sedore assisted on the early strike. Then Riley Piercey set up Zack Terry for a quick snapper from the high slot that lit the lamp at 1:09 to tie the game before some fans had found their seats. Piercey and James Mayotte picked up the helpers.

The remaining 18:51 was played without a goal. The Firebirds had the best opportunity, with a 1:02 of 5-on-3 power-play time. The Otters penalty killers shut the Birds down, allowing zero shots on goal during that time. The penalty killers blocked several shots, however, before they could make it to Lalonde. Final shots ended 15-11, advantage Erie. Flint outdrew the Otters 12-10 and went scoreless on the only two chances with the man advantage.

The second period was a higher-scoring affair, with the clubs combining for four goals. The Firebirds took their first lead of the night 1:40 into the middle frame, off a nice pass while spinning away from two defenders by Zacharie Giroux. The pass left Othmann wide open with the puck in the high slot, where he lifted a wrister over the shoulder of Lalonde for his team-leading 23rd of the season, assisted by Giroux and Piercey.

Next, Flint’s top rookie on the scoresheet found twine to extend Flint’s lead to a pair. An Erie defender tried to flip the puck over traffic from behind his own goal line, but Coulson Pitre snagged the puck out of midair over his head and dropped it to the ice in front of him between the circles. He fired a short-range shot just under the crossbar for his 11th of the season at 3:57, unassisted.

Less than a minute later, Noah Sedore attempted a shot from the high slot, but he had his stick lifted on the attempt. The puck remained in front of him, though, and he was able to shoot a second time. This time the shot deflected off Colby Saganiuk in front of the crease and slipped past Cavallin for Saganiuk’s sixth of the year at 4:41.

The Birds increased their lead to a pair at 8:51 when defenseman Tyler Deline found Gavin Hayes streaking up-ice on a two-on-two rush with Tag Bertuzzi on the left-wing side. Hayes drew both defenders before connecting a cross-ice pass to Bertuzzi, who used a forehand fake before lifting the puck bar-down over LaLonde’s outstretched left pad for his seventh.

Second-period shots were even at 15 per side, and faceoffs ended at a 17-10 surplus for the visitors. Erie had the lone power-play opportunity in the frame, but Flint’s penalty-kill was able to keep them out of the net.

Chippy play ensued, seemingly energizing the Otters and their crowd for the balance of the game. On their next power play, Christian Kyrou launched a slap shot from just inside his blue line and Cavallin made the save. The rebound trickled toward the left circle where Daniel D’Amoto took a swing at it. His shot attempt slid to Brendan Sellan in the slot who converted for his ninth of the season at 10:52.

The choppiness intensified, and with just under 6:30 to play bodies came together after a whistle. One player from each side was sent to showers early. Erie continued to increase their pace while Flint went into defense mode, focusing on clock control. The final minute and change of the game saw Flint with a 4-on-3 man-advantage, as more feisty play from both squads resulted in more penalty minutes piling up.

When time expired, the Firebirds had won their seventh game over Erie this season by the final score of 6-3. The Otters outshot 46-37, and Flint outdrew Erie 41-32. On special teams, the Otters had one goal on three attempts and Flint went scoreless with two chances.

Next Up: The Firebirds’ road trip continues as they continue to navigate around the Ontario government’s regulations. They head to Saginaw for the 10th game of the I-75 Divide Cup (presented by Coors Light) Saturday night at 7:05 p.m., followed by a road game vs. the Windsor Spitfires Sunday afternoon at 5:00 p.m. before taking on the Guelph Storm at the Sleeman Centre at 7:00 p.m. on Tuesday, January 18th.