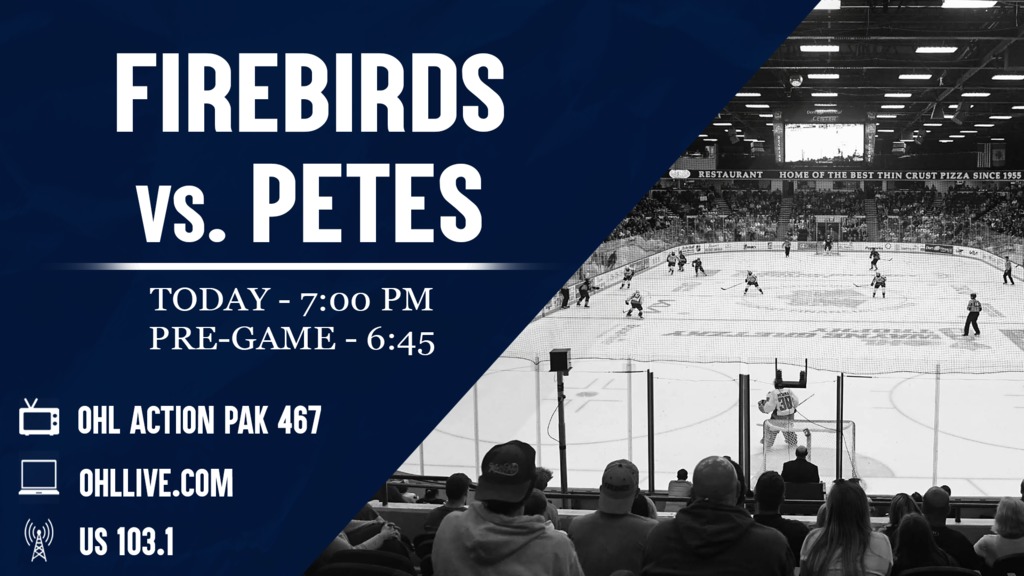 Flint, Mich. – The Firebirds haven’t seen the Eastern Conference’s Peterborough Petes in nearly three years. That all changes tonight, as the Petes, are in town on Military Appreciation Night in Flint. Puck drop is set for 7:00 p.m. (ET) at the Dort Financial Center.

Flint enters the contest with a record of 9-7-1-0, seeding them third in the West Division. Peterborough ranks second in the East Division with a mark of 9-5-1-2. The Birds have points in seven of their last ten games, having gone 6-3-1-0 in that span.

On Friday night in Flint, the Firebirds jumped up to an early 2-0 lead over the visiting Sault Ste. Marie Greyhounds before finding themselves tied 4-4 in the third period. Defensemen Tyler Deline, Dmitry Kuzmin (Winnipeg Jets), and Tristan Bertucci netted the first three goals for the home team. Amadeus Lombardi (Detroit Red Wings) lit the lamp early in the third for his seventh of the season, giving the Birds the 4-2 lead. Then the Soo scored two quick goals to even the game. Braeden Kressler (Toronto Maple Leafs) bagged the game-winner on the power play with 3:01 remaining in regulation to solidify Flint’s two points and earn ‘First Star’ accolades for his two-point (1 G, 1 A) night.

Peterborough’s most recent game was a 3-2 defeat to the Spitfires in Windsor on Thursday. Nick Lardis and J.R. Avon (Philadelphia Flyers) scored for the Petes, who held a 2-1 lead entering the third period. Michael Simpson made 31 saves between the pipes in his 13th game of the season and was named the ‘Second Star of the night.

On special teams, Flint has scored on 21.3% of their power-play chances, ranking them 10th in the OHL. Peterborough is converting at a rate of 23.1%, which is the sixth-best in the league. The Birds have killed off 78.1% of the penalties they’ve taken, which places them ninth. The Petes are tenth with a 77.6% kill rate. Peterborough is the only OHL team that hasn’t allowed a shorthanded goal against, and the Firebirds are tied for the second-most shorties scored with four.

Tonight’s game versus the Peterborough Petes is Flint’s annual Military Appreciation Night, sponsored by Dort Financial Credit Union, the DM Burr Group, and The View Newspaper Group. All United States Military Veterans and Active Duty members will receive a FREE ticket to the game, courtesy of the event sponsors. A valid ID or credentials are required to receive your FREE ticket. Puck drop is set for 7:00 p.m. (ET) at the Dort Financial Center Saturday evening. Tickets for tonight’s contest are available from ETIX HERE.

Brennan Othmann (New York Rangers) remains atop the stats for the Firebirds, and among the best in the OHL numerically. He has 11 goals and 13 assists for 24 points through 16 contests. He is currently tied for the second-most points, fourth-most goals, and seventh-most assists in the league. Riley Piercey is second in scoring with eight goals and 13 helpers for 21 total points in 17 games played. Piercey’s point total is tied for ninth-best in the OHL. Amadeus Lombardi (Detroit Red Wings) holds third place with 20 points (7 G, 13 A).

Braeden Kressler (Toronto Maple Leafs) has contributed 14 points in nine games this season. His 63.8% success rate in the faceoff circle ranks second-best in the OHL among skaters with at least 100 draws this season. He’s also fifth with a 1.56 points-per-game average.

The defensive unit is topped by Dmitry Kuzmin’s 14 points, stemming from two goals and 12 helpers. He has the fifth-most assists among league defenders. Luca D’Amato is tied for third in the entire OHL with a plus/minus rating of +13.

In goal, Flint’s netminders are led by overage veteran Will Cranley (St. Louis Blues), who’s played in 14 games this season. He’s posted a 3.31 goals-against average (GAA) and a .907 save percentage (SV%). Cranley is credited with six victories. Nathan Day has three wins across six appearances and carries a GAA of 4.95 with a .832 SV%.

Connor Lockhart (Vancouver Canucks) paces the field for the Petes, now with 24 points (7 G, 17 A) in 17 games, placing him in a tie for second-most points in a group including Flint’s Othmann. Lockhart is also second in both power-play assists (8) and total assists. Tucker Robertson (Seattle Kraken) ranks second for the club with eight goals and 14 helpers for 22 points. Forward Nick Lardis (9 G, 5 A) and rearguard Samuel Mayer (3 G, 11 A) are tied for the third spot with 14 points a piece.

The Petes’ starting goaltender is Michael Simpson, who has appeared in 13 contests. He has seven wins along with the league’s best goals-against average (GAA) at 2.34 and the best save percentage (SV%) of .924. Simpson also has one shutout this season. Liam Sztuska has two victories in four appearances, posting a 2.27 GAA and an SV% of .921.

The Petes have more than 200 alumni that have played in the NHL. Four former Petes’ players that were inducted into the Hockey Hall of Fame are Steve Yzerman, Bob Gainey, Larry Murphy, and Chris Pronger. Other notable players from Peterborough to play in the NHL include Tie Domi, Keith Crowder, Steve Downie, Danny O’Shea, Jamie Langenbrunner, Steve Montador, Mickey Redmond, Mike Ricci, Luke Richardson, and Eric Staal.

This evening’s contest against the Peterborough Petes can be heard live on the radio throughout Flint & Mid-Michigan on US 103.1 FM, online at www.us103.com or by downloading the US 103 app here. Jack Sznewajs will call the play-by-play action on the Firebirds Hockey Network (FHN), starting with the pre-game show at 6:45 p.m. (ET).

Next Up: Flint heads out for a two-game road trip beginning in Sault Ste. Marie on Wednesday. Next, they’ll visit the Knights in London, Ontario Friday before returning home to the Dort Financial Center for a Saturday night rematch against London. Tickets for Saturday’s home contest are available now from ETIX HERE.