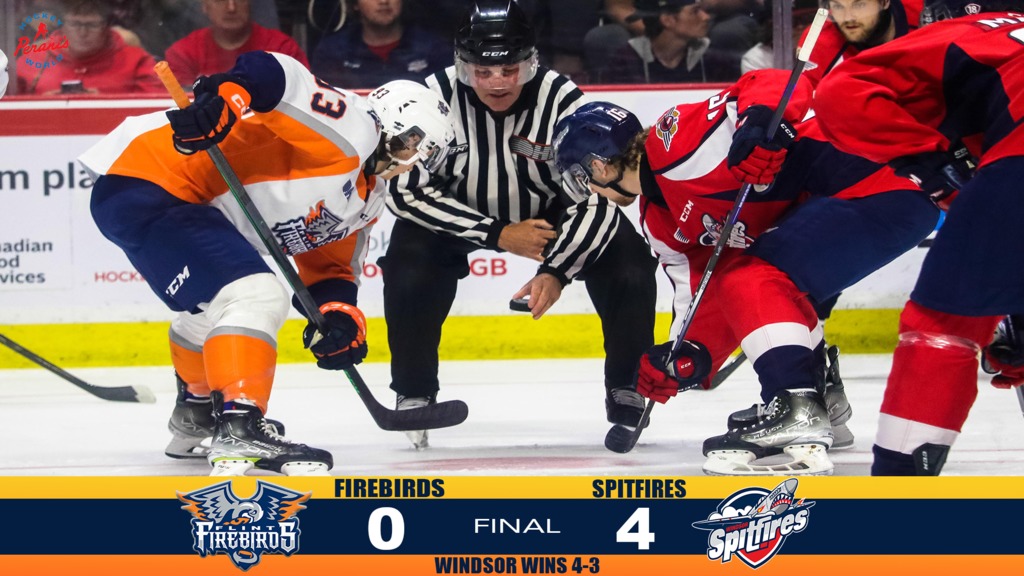 Windsor, Ont. – The Firebirds outshot the Spitfires in the final game of the Western Conference Finals, but Detroit, Mich. native Xavier Medina stopped all 38 shots faced in his second playoff start of the year. Daniel D’Amico netted a hat trick and Alex Christopoulos scored for Windsor. Luke Cavallin made 32 saves on 35 shots to keep his club within striking distance but to no avail. Simply being in the Western Conference Finals was a first in franchise history for Flint, at the tail end of a regular season that saw practically every milestone toppled. D’Amico, Medina, and Matthew Maggio were named the three stars of the game as the Wayne Gretzky Trophy was readied for presentation.

The teams came out with plenty of energy, showing no signs of the fatigue from three playoff rounds or tired legs from playing last night. Chances came in bunches for both teams right from the jump, but after the opening five minutes, the ice clearly tilted in Windsor’s favor. The Spitfires would score the only two markers in the balance of the opening frame, starting with a giveaway in the neutral zone by Flint’s defense. Daniil Sobolev (Montreal Canadians) swiped the loose puck across the blue line to Daniel D’Amico, who fired a slapper from the top of the left circle that lit the lamp for his seventh of the playoffs at 7:46.

Next, it was Matthew Maggio who picked a defender’s pocket behind the Flint cage and gave chase into the corner. He slid a pass to D’Amico who sniped a wrister past Cavallin for his second of the night and fourth in the past two games at 13:30.

First-period shots were dead even at 14 per side. Flint outdrew the Spitfires 10-9, and both clubs were scoreless on one power-play chance.

The Spits celebrated a third goal early in the second period, but there had been a penalty called behind the play and the goal was waved off. Eventually, at 16:10, Alex Christopoulos potted his eighth of the postseason off a goal-mouth pass from Ryan Abraham at even strength. Oliver Peer picked up the second assist on Christopoulos’ eighth postseason tally.

Flint trailed 3-0 heading into the second intermission and had been outshot 30-24. Faceoffs through 40 minutes totaled 25 for the Spits and 19 for the Firebirds. Both teams stood at 0-for-3 on the power play.

Still trailing by three with just under five minutes remaining in the contest, Cavallin was called to the bench for the extra man. The Firebirds sustained good pressure in the Spits’ zone, but D’Amico found the empty net for his hat trick goal at 17:06. The Spits held on for the 4-0 victory, advancing to OHL Finals while bringing Flint’s season to a close. The final shots were 38-36 to Windsor’s advantage. Flint won 37 faceoffs to the Spitfires’ 36. Neither team scored on their power-play chances, with four for Windsor and three for the Firebirds in the game. Windsor begins the final round in Hamilton on Friday.

The entire Flint Firebirds organization would like to thank the fans in Flint and around the league for their continued support. Season memberships for the 2022-23 season are available now. For more information please visit www.Flintfirebirds.com/seasonmemberships or call the Dort Financial Center Box Office at (810)744-0580.