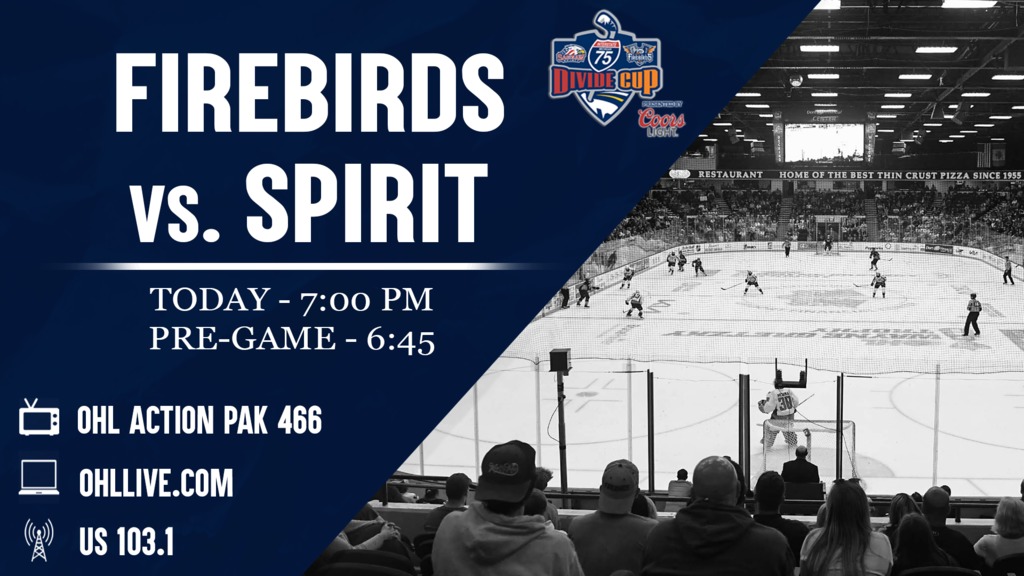 Flint, Mich.  – The Firebirds host their in-state rivals from north of I-75 tonight. For the seventh year in a row, the team who wins the most regular-season meetings between the two clubs will take home the coveted I-75 Divide Cup, sponsored by Coors Light. Both teams have claimed the Cup three times in the past six seasons. Puck drop is scheduled for 7:00 p.m. (ET) at the Dort Financial Center. Tickets for tonight’s contest are available from ETIX HERE.

Tonight marks the second of eight contests versus the Spirit this season, and the first of four scheduled in Flint. Last season, these clubs met an unprecedented 15 times due to lingering travel restrictions across the OHL. The Firebirds won nine of the tilts to claim the I-75 Divide Cup. On the home ice, Flint finished 3-4-0-1. All time at the Dort Financial Center, the Birds have gone 10-14-0-3 vs. Saginaw.

In their one previous meeting this season, the Firebirds skated away with a decisive 7-2 victory at the Dow Event Center. Braeden Kressler (Toronto Maple Leafs) led the way with a four-point (2 G, 2 A) performance, earning him ‘First Star’ honors. Coulson Pitre contributed three points (1 G, 2 A), and Gavin Hayes (Chicago Blackhawks) logged a goal and an assist. Will Cranley (St. Louis Blues) stopped all but two of the 29 shots for the victory in goal.

Between these clubs are eight players from the state of Michigan. For Saginaw, Dean Loukus hails from Calumet, Liam Starch is from Rochester Hills, Davis Codd comes from Brighton, PJ Forgione calls Novi home, Andrew Oke is from Shelby Township, and the home-town hero is Mitchell Smith with Saginaw roots. The Firebirds have forward Gavin Hayes who hails from Westland and Owen Pitters is from Chesterfield.

On special teams, the Firebirds have converted on 22.6% of their power-play chances, ranking them eighth in the league. The Spirit have found success 26.9% of the time, which is currently fourth-best in the OHL. Flint has killed off 77.0% of their penalties, the 12th-best rate in the league. Saginaw has the top-ranked penalty kill at an 87.2% efficiency.

Amadeus Lombardi (Detroit Red Wings) leads the Firebirds in points with nine goals and 16 assists through 21 games played. He’s tied for the eighth-most assists and tenth-most points in the league. Riley Piercey ranks second with 22 points (9 G, 13 A). Gavin Hayes (Chicago Blackhawks) and Coulson Pitre are tied for third with eight goals and 11 helpers each. Pitre’s currently standing at a +14 in the plus/minus rankings, which is tied for fifth in the OHL.

Braeden Kressler (Toronto Maple Leafs) has played in only 13 games with the club, but leads the pack with ten goals and already has 16 points. Kressler ranks third in the OHL in faceoff win percentage among players with 100+ draws at 59.9%. He’s also one of five players in the league with two shorthanded goals this year, and that’s tied for the most to date. He’s also tied for eighth in power-play goals with five.

The defensive unit is led by Dmitry Kuzmin’s 17 points, stemming from three tallies and 14 helpers. He’s tied for the third-most assists among all league defenders and has the fifth-most points. Luca D’Amato ranks third in the OHL with a plus/minus rating of +15.

In goal, Flint’s netminders are led by overage veteran Will Cranley (St. Louis Blues), who’s played in 17 games this season. He’s posted a 3.24 goals-against average (GAA), and his .906 save percentage (SV%) is fourth-best in the league. Cranley is credited with seven victories. Nathan Day now has four wins across seven appearances and carries a GAA of 4.78 with a .829 SV%.

The Spirit are led on the scoresheet by defenseman Pavel Mintyukov (Anaheim Ducks) with ten goals and 14 assists on the season. He’s first among all OHL defenders in goals, assists, points, and points-per-game average (1.38), and is tied for first with four power-play tallies. Sophomore winger Calem Mangone averages exactly one point per game and ranks second for the Spirit with six goals and 15 helpers. Matyas Sapovaliv (Vegas Golden Knights) is third with 20 points (9 G, 11 A). 15-year-old rookie standout Michael Misa is just outside the top three in total points (19), but leads the club in goals scored (12) and has only played in 15 contests this year.

Between the pipes, fourth-season netminder Tristan Lennox (New York Islanders) has backstopped the Spirit in 14 appearances to date. He’s won ten games and carries a 3.01 goals-against average (GAA) with a save percentage (SV%) of .884. Shelby Township, Mich. native Andrew Oke has posted four victories in seven games, posting a 3.49 GAA and a SV% of .865.

Tonight’s contest against the Saginaw Spirit can be heard live on the radio throughout Flint & Mid-Michigan on US 103.1 FM, online at www.us103.com or by downloading the US 103 app here. Jack Sznewajs will call the play-by-play action on the Firebirds Hockey Network (FHN), starting with the pre-game show at 6:40 p.m. (ET).

All Flint Firebirds’ home and away games throughout the 2022-23 regular season can be watched anywhere in the world online on https://watch.chl.ca/ohl. CHL TV is the league’s new and improved video streaming platform that delivers high-quality live and on-demand coverage of all regular season and playoff games annually. The cost is $7.99 for 24-hour access, $29.99 for monthly access, $119.99 for all-access to the 2021-22 Firebirds and OHL season, or $179.99 for all-access to the entire 2021-22 CHL season.

Next Up: The Firebirds head to Windsor for a Friday night tilt with the Spitfires, before returning to Flint Saturday to host the Sarnia Sting. Saturday’s contest is the Firebirds’ annual Teddy Bear Toss Night. Fans are encouraged to bring a new or gently used Teddy Bear to the game and throw it on the ice after Flint scores their first goal of the game. All collected Teddy Bears will be donated to local non-profits and charities such as Whaley Children’s Center, Hurley Children’s Hospital, Ennis Center for Children, the YWCA and many more. Tickets for Saturday’s home game are available now from ETIX HERE.