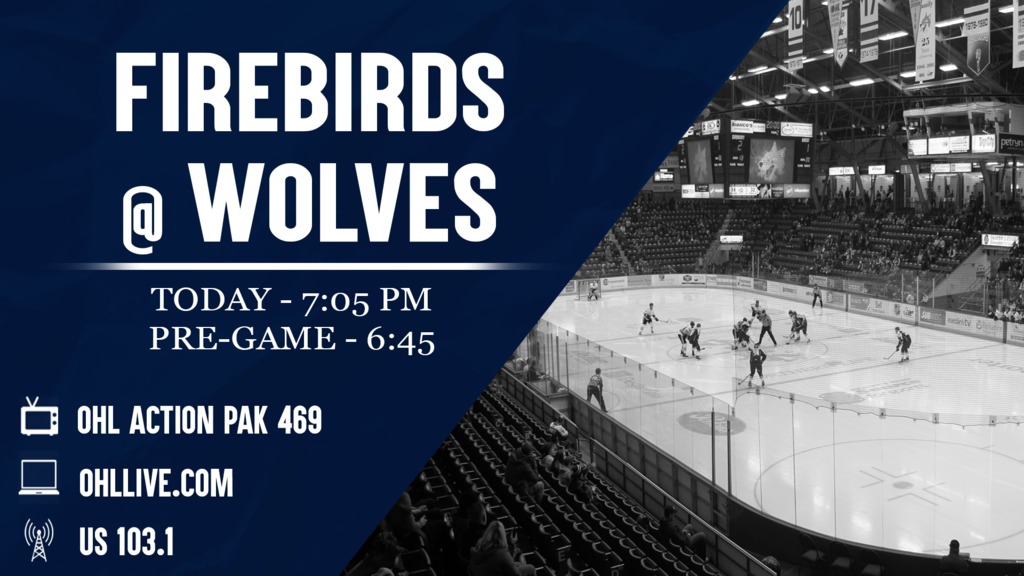 Sudbury, Ont – The next stop on Flint’s five-game road is tonight in Sudbury. The Firebirds look to avenge a 4-2 defeat on home ice in the fourth regular-season game back on October 4. Puck drop is set for 7:05 p.m. (ET) at the Sudbury Community Arena.

Tonight’s game is the second of only two meetings between these teams this season and is the only time they’ll meet in Sudbury. Flint’s all-time record versus the Wolves is 6-4-1-0 with a mark of 2-3-0-0 on the road in the series. The Birds look to break a record of 0-5-0-0 against the Central Division this season.

On special teams, the Firebirds are 16th on the power play with a 20.1% conversion rate. Sudbury has scored 21.0% of the time on the man-advantage, good for 14th. When shorthanded, Flint’s killing penalties at a rate of 77.1% which is 12th-best in the league. The Pack ranks 19th on the penalty kill with a 72.7% rate of success.

Amadeus Lombardi continues to lead the Firebirds in goals (23), assists (27), and total points (50) through 38 contests. He ranks tenth in goals and is tied for eighth in total points for the OHL. Westland, Mich. native Gavin Hayes has 22 goals for the season plus 16 helpers for 38 points to rank second in scoring. Riley Piercey and defenseman Dmitry Kuzmin are tied for third with 35 points each. Piercey has 12 tallies and 23 helpers for 35 points. Kuzmin has nine goals and 26 assists for 35 points and enters tonight’s contest on a four-game points streak (3 G, 3 A). He has the fourth-most points among league defenders, is tied for the fifth-most assists, and is tied for ninth in goals.

Newcomer Nolan Dann is expected to play in his 100th OHL game tonight after picking up his first point (1 A) in his first game with Flint in Barrie last night.

The Wolves are led by sophomore forward David Goyette with 51 points (25 G, 26 A) through 35 games. He’s tied for fifth in goals and ranks seventh in total points. Hamburg, NY native Quentin Musty was the first overall pick in the 2021 OHL Priority Selection and ranks second for Sudbury with 12 tallies and a team-high 36 helpers for 48 points. He’s fifth in the league for assists and eighth for point-per-game average (1.50). Kocha Delic and Landon McCallum are tied with 32 points each to rank third. Delic has 12 goals and 20 assists and McCallum has eight goals with 24 helpers. The defensive unit is topped by Matthew Mania with 21 points (6 G, 15 A).

Between the pipes, both Sudbury Wolves have combined for 11 total games of OHL experience. Rookie Nate Krawchuk was the club’s first-round pick (3rd overall) in the 2022 U-18 Draft and has two career victories in eight appearances. He carries a 4.17 goals-against average (GAA) and a save percentage (SV%) of .873. Overager Kevyn Brassard is also in his first season in the OHL, and now has one victory in three appearances. His GAA stands at 3.28 and his SV% is .895.

This evening’s contest against the Barrie Colts can be heard live on the radio throughout Flint & Mid-Michigan on US 103.1 FM, online at www.us103.com, or by downloading the US 103 app here. Jack Sznewajs will call the play-by-play action on the Firebirds Hockey Network (FHN), starting with the pre-game show at 7:10 p.m. (ET).