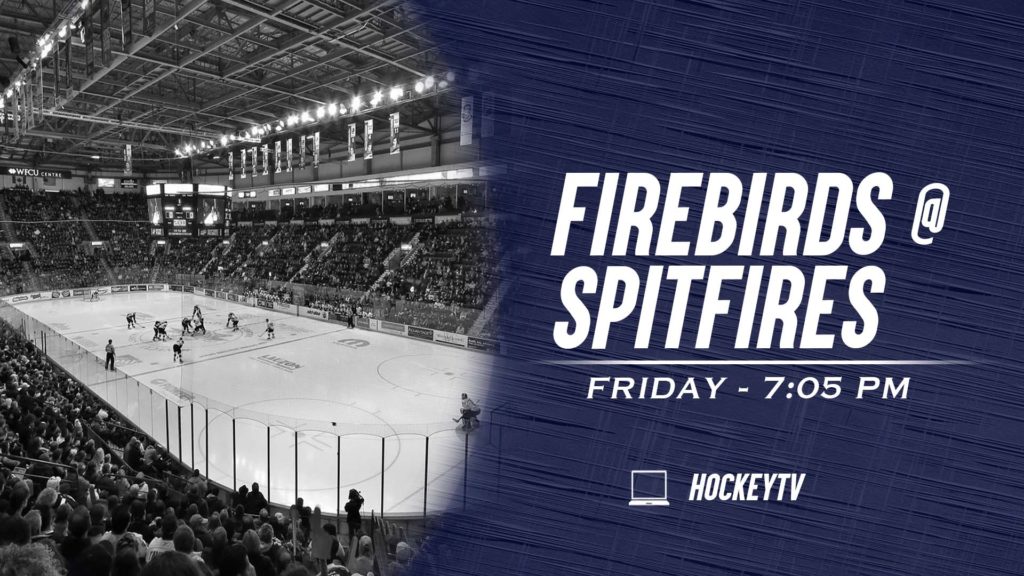 Windsor, Ont. – The Firebirds kick off the 2022 Preseason tonight with a trip to familiar territory. Only a few months ago, Flint and Windsor battled to Game 7 of the Western Conference Finals before the Spitfires advanced to the OHL Finals. Now the Birds and Spits will play three consecutive games, sure to be much different in nature. Puck drop for Game 1 of Flint’s five-game preseason schedule is set for 7:05 p.m. (ET) versus the Spitfires at the WFCU Centre in Windsor.

Bench Boss Ted Dent returns for his second season with Flint. While the club had to say goodbye to overagers Luke Cavallin, Ethan Keppen, and Tag Bertuzzi, there’s still plenty of talent returning for another deep run in the OHL playoffs. With a plethora of returning players from a season ago, the staff can focus on the newcomers and the line chemistry to find the perfect pairings.

Friday marks the first exhibition tilt between these clubs since September 11, 2019, when the Birds skated to a 3-2 victory in Windsor. Prior to meeting in the Western Conference Finals to conclude the 2021-22 campaign, these clubs battled eight times during the regular season. Flint finished 1-5-1-1 in the series before posting three victories over the Spits in the Conference Finals.

Among a solid group of returning sophomore players who are looking to have a breakout season are Coulson Pitre, Tristan Bertucci and James Petrovski. Pitre was initially drafted by the Spitfires (Round 4, 2020), but has played every OHL game in a Firebirds Jersey. He finished last season tied for third among OHL rookies with 23 goals scored. Bertucci was a reliable young defenseman for the Firebirds last year, setting a new franchise record in +/- with a +26 rating. Petrovski chipped in ten points (3 G, 7 A) from the blue line as the youngest skater on the roster.

Three rookie forwards to keep an eye on are Kaden Pitre, Nathan Aspinall, and Daks Klinkhammer. Pitre, younger brother of returning forward Coulson, was Flint’s first-round pick (18th overall) in the most recent OHL Priority Selection. Aspinall was taken in the second-round (33rd overall) and brings a hefty 6-foot-5, 170-pound presence to the forward corps. Klinkhammer, a native of Ajax, Ont., was selected in the sixth round (113th overall). A season ago he averaged a point per game (13 G, 14 A in 27 games) with the Ajax/Pickering Raiders of the ETAHL U18.

The two fresh faces among the defensive troops are Reed Gee and Matthew Jenken. Gee was the Firebirds’ third-round pick (46th overall), making him the highest rearguard the Birds selected in the most recent draft. He stands 6-foot-0 and logged the sixth-most points of all defensemen in the league while with the Quinte Red Devils of the ETAHL U16. Jenken was the Firebirds’ first-round pick (17th overall) in the U18 Draft this past summer and brings a 6-foot-2, 161-pound frame to the blue line as just a 16-year-old.

Between the pipes, overage veteran Will Cranley (St. Louis Blues) looks to backstop the Birds this season, bringing a career record of 35-27-0-2 across three seasons with the Ottawa 67s. His career goals-against average (GAA) is 3.46 and his save percentage (SV%) stands at .878%. Two familiar youngsters seek a backup spot with the club in Ian Michelone and Nathaniel Day. Michelone made 10 appearances with the Birds last year, earning four wins and finishing with a 4.37 GAA and a SV% of .884. Day logged two victories in eight appearances, earning a 3.63 GAA with a .883 SV%. Flint acquired another netminder in first-round pick (20th overall, 2021 OHL U18 Draft) Boe Piroski from the Niagara IceDogs on Thursday.

Broadcast Coverage: The game will be streamed live for free, with an account, on HockeyTV.

Next Up: The Firebirds return home to host Windsor Sunday evening at Flint Iceland Arena. Season Ticket Holders get in for FREE. All other General Admission tickets are just $10 each and parking is free. Puck drop is set for 4:00 p.m. (ET) this Sunday, September 11.