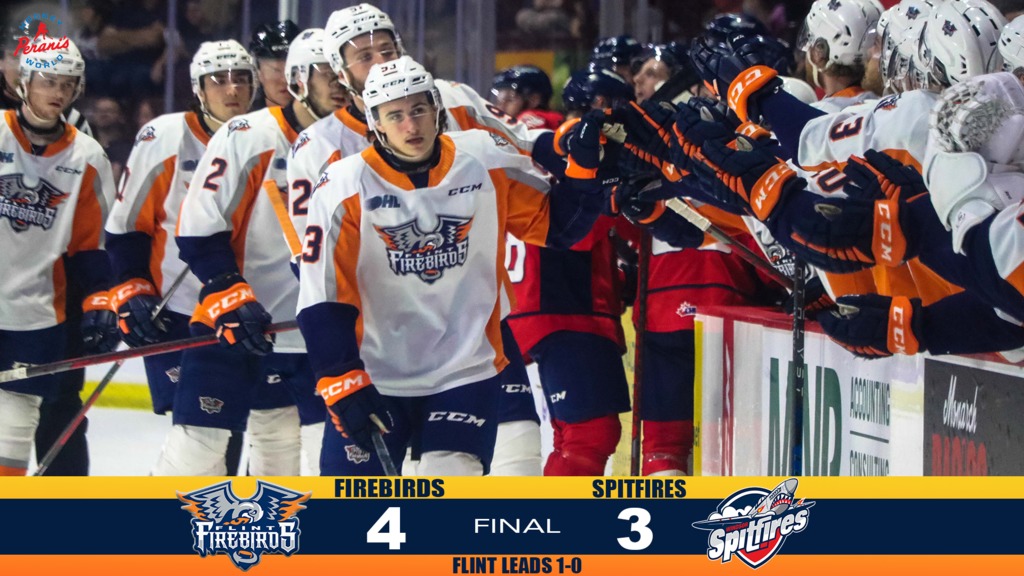 Windsor, Ont. – The Firebirds’ first-ever Western Conference Finals game saw them skate away to their first-ever Western Conference Finals win after downing the Windsor Spitfires 4-3 in Game 1. Luke Cavallin got the start in net for Flint and came away with 35 saves in a First Star effort. Tag Bertuzzi led the way with two goals for Third Star honors. Ryan Abraham had two goals for the Spits and was named the Second Star and it was Mathias Onuska getting the start in net for the Spitfires.

The first period started with a feeling-out process between the two teams. The Firebirds got the first man-advantage of the game but were unable to convert. Eventually, a loose puck between the hash marks found Ethan Keppen who backhanded it between his legs to Amadeus Lombardi who beat Onuska high to the glove for his fifth of the playoffs at 12:48. James Mayotte picked up the secondary assist, his fourth of the playoffs.

The Spitfires responded with plenty of chances. Then on the powerplay, Ethan Miedema slipped one down low to Livonia, Mich. native Ryan Abraham who cut to the net and backhanded one five-hole on Cavallin. Michael Renwick added the secondary assist at the 18:52 mark.

The Spits outshot the Birds 13-10 in the opening frame, but Flint outdrew Windsor 15-6.

The second period started with a bang. After a penalty was taken by the Birds 19 seconds in, Wyatt Johnston scored his 9th of the playoffs six seconds into the man-advantage to give the Spits their first lead, 2-1. Will Cuylle and Louka Henault added the assists.

Flint had the answer. A bad change by the Spitfires led to a 2-on-1 for the Birds. Riley Piercey snapped it cross-ice to Tag Bertuzzi who one-timed it home glove side on Onuska to tie things up at two just 3:50 into the 2nd. Sahil Panwar added the secondary assist.

The Firebirds continued to up the pressure and it paid off. A loose puck found James Mayotte atop the blue line. He let a snapshot go high and overtop the glove of Onuska. The goal was unassisted at 9:08 of the 2nd.

They weren’t done there. Coulson Pitre let a shot go from the bottom of the circle in the offensive end, and on the second rebound attempt, Tag Bertuzzi put home his second of the game to give Flint a 4-2 lead with under five to go in the 2nd.

Just when it looked like Flint was going to take a tw0-goal lead to the locker room, Louka Henault let a rocket go from the point that perfectly bounced off the backboards to Ryan Abraham for his second goal of the game with just 48.6 seconds left in the period. Daniel D’Amico added the secondary assist.

Luke Cavallin put on a vintage performance in the 3rd Period stopping all 15 shots he faced and two Spitfire powerplays wrapping up a 4-3 win and a 1-0 series lead. Shots in the 3rd for 15-5 Windsor and face-offs were 18-10 Spits.