Firebirds Look to Sweep the Homestand Tonight vs. Windsor at 7 PM 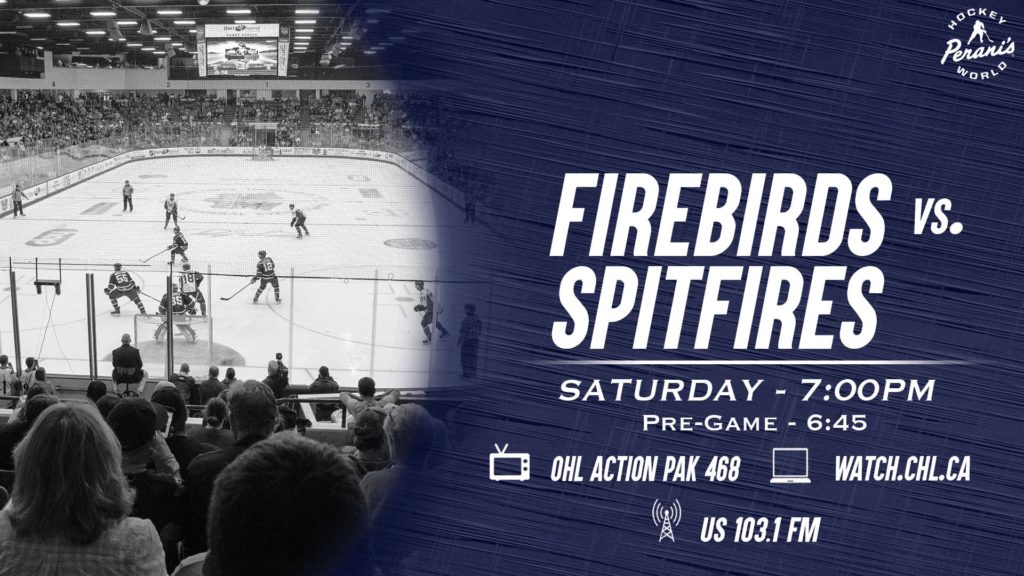 Flint, Mich. – The Firebirds host the Windsor Spitfires in their second of three-straight games this weekend on Saturday night. Puck drop is set for 7:00 p.m. (ET) at the Dort Financial Center. Great seats are still available HERE.

The Firebirds enter Saturday’s contest in third place in the West Division with a record of 7-5-0-0. The Spitfires sit fifth in the West, with a 6-6-0-2 record. On home ice this year, the ‘Birds are 4-4-0-0 compared to Windsor’s road record of 3-2-0-1. Saturday marks the second of eight meetings between these clubs, and the second of four games to be played in Flint this season. All-time, the Firebirds hold a record of 12-18-1-0 versus Windsor and are 8-8-0-0 at the Dort Financial Center. Last season the ‘Birds won three of six games in the series.

The last time these clubs met was November 3 in Flint. The Spits got the upper hand that night, skating away with a 6-2 victory. Windsor was led by a hat trick from Matthew Maggio, who earned first-star honors in the contest for his four-point performance (3 G, 1 A). Kyle McDonald scored twice for the visitors and Ethan Miedema recorded a goal and assist. For the Firebirds, Brennan Othmann (New York Rangers) scored his fifth goal and ninth point of the season and defenseman Luca D’Amato potted his first OHL goal along with an assist. Between the pipes, Xavier Medina stood tall with 36 saves on 38 shots from Flint. Across the ice, Luke Cavallin made 28 saves on 34 shots.

On special teams, the Firebirds are converting with the man-advantage at a 15.1% rate, which ranks them 16th in the OHL. Flint converted on both power-play chances versus Erie Friday night. Windsor has scored at a success rate of 18.2%, which places them 13th. Flint is killing penalties at an 87.0% clip, ranking them second in the 20-team OHL. The Spitfires’ penalty-kill has shown a success rate of 67.3%.

Saturday’s game is First Responders Night to benefit The Hundred Club, Sponsored by Dort Financial Credit Union. All Police, Fire, and EMS employees will receive a FREE ticket at the box office with a valid ID. There also will be a Battle of the Badges game from 4:30-5:30 pm. Admission to the Battle of the Badges event is free with a ticket to the Firebirds’ game. The night is made possible by the following sponsors: Dort Financial Credit Union, The DM Burr Group, Medstar, LJ Inc., The View Newspaper Group, and Complete Towing. The Hundred Club will also be the 50/50 raffle partner for the night.

In net, Luke Cavallin has appeared in 11 games thus far. He carries a goals-against average (GAA) of 3.19. His save percentage (SV%) is .903. Cavallin has earned six wins, with one of them being a shutout. Rookie netminder Ian Michelone played one full game, making 32 saves on 33 shots in the victory. Nathaniel Day played the final 18 minutes of a road game in Saginaw and turned aside all four shots faced.

Windsor Spitfires (6-6-0-2, 5th West Division):
Wyatt Johnston (Dallas Stars) leads the Spits with 16 total points (8 G, 8 A) through 14 games. Will Cuylle ranks second for Windsor in scoring with nine tallies and four helpers for 13 points in 14 contests. His three game-winning goals are tied for third-most in the OHL. Kyle McDonald also has 13 points in 14 games played, including seven goals and six assists.

Defenseman Louka Hanault leads the rearguards with three goals and six assists through 11 games played in total. Ethan Miedema continues to top the freshman class for Windsor with 11 total points (4 G, 7 A).

Detroit, Michigan native Xavier Medina has appeared in nine contests for the Spitfires, earning four victories. The second-year goaltender carries a 3.29 goals-against average (GAA) and a .883 save-percentage (SV%). Rookie netminder Kyle Downey has two wins in seven appearances. His GAA sits at 4.35 and he has a .858 SV%.

Saturday evening’s contest against the Windsor Spitfires can be heard live on the radio throughout Flint & Mid-Michigan on US 103.1 FM, online at www.us103.com, or by downloading the US 103 app here. Jack Sznewajs will call the play-by-play action on the Firebirds Hockey Network (FHN). Pregame coverage will begin prior to puck drop at 6:45 p.m. (ET) Saturday evening.

The game will also be televised live across the province of Ontario on the OHL Action Pak on channel 468 (4468 HD) for both Rogers TV and Cogeco TV cable subscribers. OHL fans with cable television in Ontario can add the OHL Action Pak to their television plan to catch the Firebirds in action, home or away all season long. Also, all Flint Firebirds’ home and away games throughout the 2021-22 regular season can be watched anywhere in the world online on https://watch.chl.ca/ohl. CHL TV is the league’s new and improved video streaming platform that delivers high-quality live and on-demand coverage of all regular season and playoff games annually. The cost is $6.99 for 24-hour access, $24.99 for monthly access, $109.99 for all-access to the 2021-22 Firebirds and OHL season, or $159.99 for all-access to the entire 2021-22 CHL season.