Firebirds Look to End Skid with Season Sweep of Greyhounds 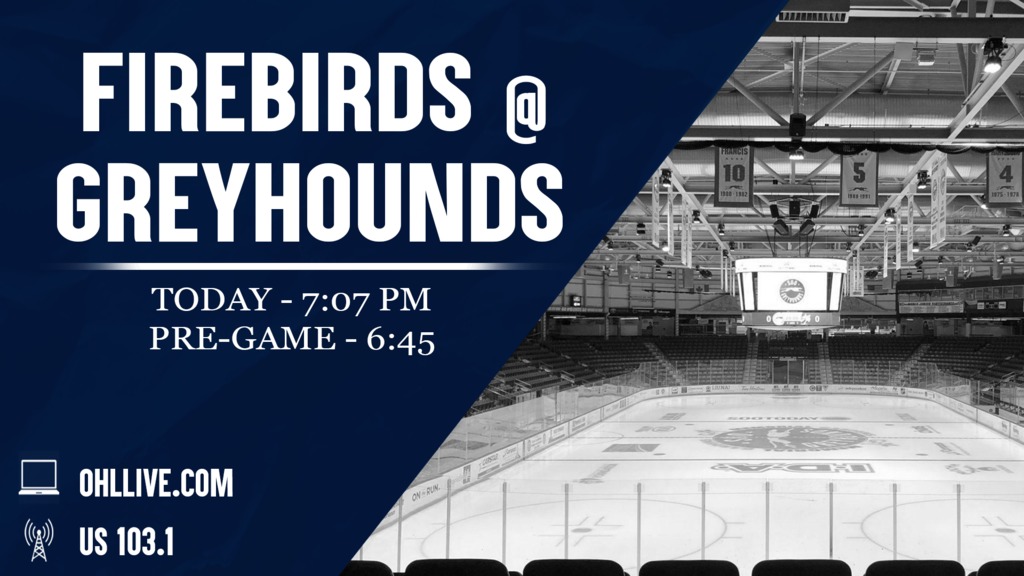 Sault Ste. Marie, Ont. – The final stop on Flint’s five-game road is tonight in the Soo versus the Greyhounds. The Birds have won all five prior meetings with the Hounds this season, but are winless in their last four road contests. Puck drop is set for 7:07 p.m. (ET) tonight at the GFL Memorial Gardens.

Tonight’s game is the sixth and final meeting between these teams this season and is the third of three games scheduled in the Soo. Flint’s all-time record versus the Hounds is 19-18-1-2 with a mark of 9-9-0-1 on the road in the series. The Birds are 11-7-2-0 against West Division opponents this season.

On special teams, the Firebirds are 16th on the power play with a 20.6% conversion rate. Sault Ste. Marie has scored also scored 20.6% of the time on the man-advantage, good for 15th. When shorthanded, Flint’s killing penalties at a rate of 78.5% which is 10th-best in the league. The Greyhounds rank 13th on the penalty kill with a 77.1% success rate overall.

Amadeus Lombardi tops the stats for Flint with 51 total points, which are tied for ninth-most in the league. He and teammate Gavin Hayes are tied for the tenth-most goals on the season with 23 a piece. Hayes ranks second for the club with 40 total points to date. Defenseman Dmitry Kuzmin sits third with nine goals and 29 assists for 38 total points. He ranks fourth among all OHL defensemen for points and assists, and his nine tallies are tied for the ninth-most.

Sophomore forward Ethan Hay is expected to play in his 100th OHL contest this evening. On the season, Hay has eight goals and eight assists and is only three points shy of tying his total from his rookie year.

Bryce McConnell-Barker sits atop the scoresheet for the Hounds, now with 51 points (23 G, 28 A) through 41 games. He ranks fifth for power-play tallies in the OHL with ten. Overage forward Kalvyn Watson is second with 20 goals and 23 assists on the season. The rearguards for the Soo are led by Kirill Kudryavtsev with 35 points (6 G, 29 A) to date, who ranks fifth among all OHL defensemen in points and is tied with Firebirds’ defenseman Dmitry Kuzmin for the fourth most assists.

The Hounds’ goaltenders are led by 2020’s U-18 First Round draft pick (4th overall) Samuel Ivanov. In 29 appearances, Ivanov has 10 wins and a 3.98 goals-against average (GAA). His save percentage (SV%) stands at a .869. Charlie Schenkel has 4 victories across 14 appearances. Two of his four wins have been shutouts, tying him with five others for the most yet this season. Schenkel’s GAA stands at 3.00 with a .912 SV%.

This evening’s contest against the Sault Ste. Marie Greyhounds can be heard live on the radio throughout Flint & Mid-Michigan on US 103.1 FM, online at www.us103.com, or by downloading the US 103 app here. Jack Sznewajs will call the play-by-play action on the Firebirds Hockey Network (FHN), starting with the pre-game show at 6:40 p.m. (ET).

Next Up: Flint returns home for a pair of home games to complete another three-games-in-three-days weekend. First up is tomorrow when they host the Saginaw Spirit for another installment of the I-75 Divide Cup, presented by Coors Light. With the Firebirds trailing four games to one, the visiting Spirit can reclaim the Cup in Flint. Puck drop is set for 7:00 p.m. and tickets can be found at the Dort Financial Center Box Office or at ETIX HERE. Then on Sunday, the Erie Otters are in town for a 4:00 p.m. tilt. The Flint Firebirds are preparing to host their first-ever Family ‘FUN’day Sunday S.T.E.A.M. Day. Get two FREE kids tickets (ages 12 & under) for every ONE paid adult admission, valid at the Dort Financial Center Box Office Only. Starting at 3:00 p.m. when the doors open there will be science, technology, engineering, art, and mathematic activities or demonstrations that will be set up around the concourse for children and families to participate in. Children (17 & under) who partake in all of the activities & demonstrations will receive a FREE S.T.E.A.M. Day puck for their participation, while supplies last. S.T.E.A.M. Day would not be possible without the support of the following organizations: Kettering University, First Robotics, YMCA Camp Copneconic, Math4Flint, and the Flint & Genesee Literacy Group. All other tickets for Sunday’s game can be found at ETIX HERE.