Firebirds Look to Go Up 2-0 in the Series, Host Greyhounds for Game 2 Sunday 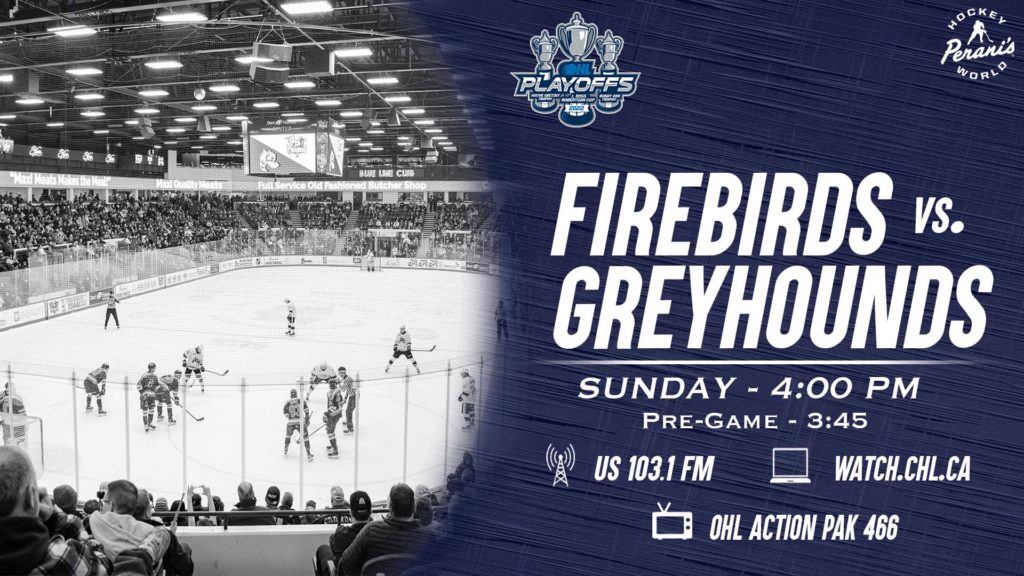 Flint, Mich. – The Firebirds are the deepest into the playoffs the franchise has ever gone, and they’re not taking their foot off the gas. After a thrilling 5-3 victory to kick off the second-round series versus the Sault Ste. Marie Greyhounds, the Birds seek an early 2-0 series lead with another win on home ice Sunday. Puck drop for Game 2 versus the Greyhounds is set for 4:00 p.m. (ET) at the Dort Financial Center, and great seats are still available from ETIX.

Through five regular-season meetings between these clubs this year, Flint finished with an overall record of 2-1-0-2, and a 1-1-0-1 record on home ice. The Birds’ lone regulation victory was in the final game of the regular season in which captain Brennan Othmann tallied four goals to reach 50 for the season. Three of the games required extra time, with Flint winning once in overtime and the Soo winning twice in shootouts. In the five meetings, the Hounds outscored the Birds 24-22. Leading the way for Flint on the scoresheet during the series between these clubs were Brennan Othmann (New York Rangers) and rookie Gavin Hayes. Othmann has seven goals and two assists, whereas Hayes has seven helpers and two tallies. Zacharie Giroux and Amadeus Lombardi are tied for third with two goals and four assists each. The Greyhounds were led by Rory Kerins (Calgary Flames) with three goals and five assists, followed by Robert Calisti and Kalvyn Watson with a goal and six helpers each.

On special teams, the Firebirds finished with the OHL’s top-ranked penalty kill, finding success at a rate of 84.2%. In playoff games so far, they rank fourth with a 91.3% efficiency. The Hounds killed penalties at a 78.7% clip during the 68-game campaign, the league’s 11th-best. They’re currently sixth in the playoffs at 81.5%. Flint converted with the man-advantage at a 19.7% regular-season rate, which ranked them 12th in the 20-team OHL. Sault Ste. Marie scored on 28.4% of their chances, which was the best in the league. Statistically, the Birds are now 11th-best so far in the 2022 playoffs at 14.7%, and the Greyhounds sit third converting at 33.3%.

Through the eight postseason games to date, Flint’s led by their Captain Brennan Othmann with five goals and four assists for nine points. Ethan Keppen (Vancouver Canucks) ranks second with a point-per-game average, also scored five times and earned three helpers. Of note, prior to this year, no Flint player had ever logged more than four goals in the playoffs. Amadeus Lombardi also has eight points (4 G, 4 A) in eight games. Dmitry Kuzmin (Winnipeg Jets) tops the blue-line unit with six assists through eight games played.

Coulson Pitre led the team’s freshman class in goals (23) this season and had 44 total points through 52 contests. He is the club’s all-time rookie goal-scoring leader, and he has four goals and an assist in the playoffs to date. He’s tied for third in rookie scoring this postseason. Westland, Mich. native Gavin Hayes finished atop the scoresheet for rookies on the roster with 49 total points (19 G, 30 A) in 65 games. He holds the franchise records for assists and points in a single season by any Flint rookie and has three assists in the playoffs so far.

Luke Cavallin started these playoffs with the league’s seventh-best goals-against average (GAA) of 3.16 and the league’s third-best save percentage (SV%) at .910 through 56 appearances. He earned the most wins in the league and the most in Flint history, ending at 36 victories during the regular season. In eight playoff appearances, Cavallin has five wins and a GAA of 2.51. He also carries the OHL’s second-best SV% of .930. Behind Cavallin are two rookie goalies. Ian Michelone appeared in ten regular-season games and picked up four victories. He carries a GAA of 4.37 and a SV% of .884. Michelone was one of only two goalies in the league to earn a shutout this season. Nathaniel Day has two victories in eight regular-season appearances, with a 3.63 GAA and a .883 SV%.

The Greyhounds have played six playoff games thus far, and are led on the scoresheet by defenseman Jack Thompson (Tampa Bay Lightning) with an impressive 12 points (5 G, 7 A). Among all OHL defensemen, Thompson ranks first in goals, is tied for first in assists and points, and ranks first in power-play goals (3). Fellow rearguard Ryan O’Rourke (Minnesota Wild) is second with a goal and seven assists (T-1st). Tye Kartye (Seattle Kraken) is third on the team with seven points (5 G, 2 A). The leader among the rookie class for the Greyhounds was Bryce McConnell-Barker, who now has four playoff points (1 G, 3 A).

Sunday afternoon’s contest against the Sault Ste. Marie Greyhounds can be heard live on the radio throughout Flint & Mid-Michigan on US 103.1 FM, online at www.us103.com, or by downloading the US 103 app here. Jack Sznewajs will call the play-by-play action on the Firebirds Hockey Network (FHN). Pregame coverage will begin prior to puck drop at 3:40 p.m. (ET) Sunday afternoon.

Next Up: The Firebirds will travel to Sault Ste. Marie for games 3 and 4 of the series. Both games start at 7:07 p.m. (ET), with Game 3 scheduled for Tuesday and Game 4 for Thursday. Fans can follow all the action on the radio throughout Flint & Mid-Michigan on US 103.1 FM, online at www.us103.com, or by downloading the US 103 app here. Jack Sznewajs will call the play-by-play action on the Firebirds Hockey Network (FHN) with the pre-game show set for 6:45 p.m. before each game.. Game five of the series, if necessary, will return to Flint next Saturday, May 14. Puck drop for the fifth game will be 7:00 p.m. (ET), and tickets will be available from ETIX, in person at the Dort Financial Center box office, or by calling (810) 744-0580. Follow flintfirebirds.com for details and availability of Game 5 tickets (if necessary).