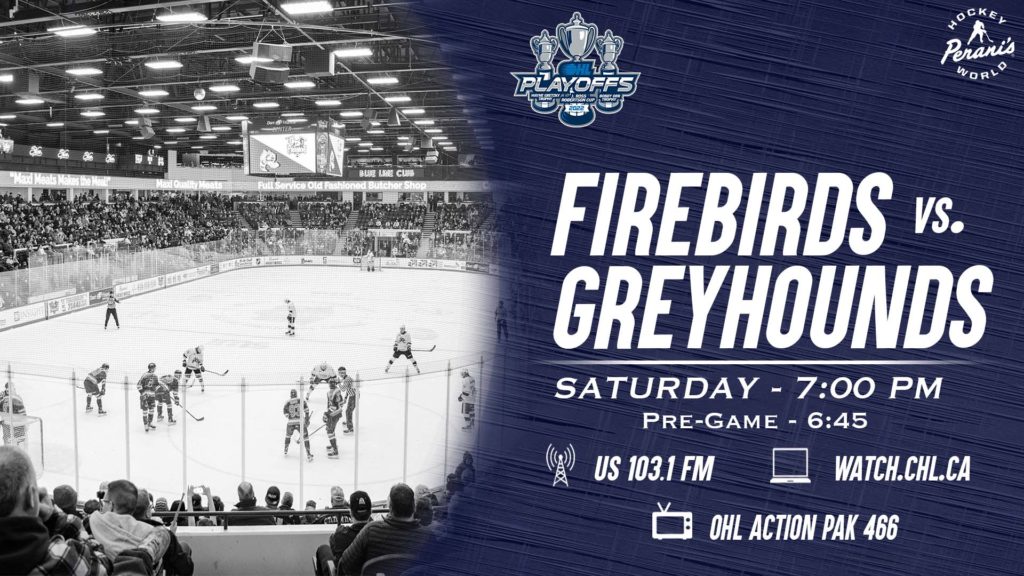 Flint, Mich. – The Firebirds are on the cusp of their first Conference Finals appearance in franchise history. After a thrilling 3-2 overtime victory to take a 3-1 series lead versus the Sault Ste. Marie Greyhounds, the Birds seek a spot in the OHL’s final four. Puck drop for Game 5 versus the Greyhounds is set for 7:00 p.m. (ET) at the Dort Financial Center, and great seats are still available on ETIX HERE.

Flint entered the 2022 playoffs ranked third in the Western Conference and second in the West Division with a regular-season record of 42-21-1-4. The Greyhounds were seeded fourth in the Western Conference and third in the West Division with a 39-22-6-1 record. On the home ice this year, Flint posted a home record of 18-14-0-2. Sault Ste. Marie’s final road record was 16-13-4-1. In the 2022 playoffs so far, Flint has won five of six home games and the Hounds have dropped three of four decisions on the road. All time, the Firebirds carry a regular-season record 14-18-1-2 against the Soo, with a home record of 7-9-1-1 in the series.

Through the four games in the current series, Firebirds’ Captain Brennan Othmann (New York Rangers) sits atop the scoresheet for either club with nine points (4 G, 5 A). Rookie Gavin Hayes has three goals plus three assists and fellow first-year forward Coulson Pitre has also scored three times. Defenseman Dmitry Kuzmin (Winnipeg Jets) has assisted five times across the four games. The Greyhounds are topped by Jack Thompson (Tampa Bay Lightning) and Rory Kerins (Calgary Flames) each with five points in the series.

On special teams, the Firebirds finished the 68-game campaign with the OHL’s top-ranked penalty kill, finding success at a rate of 84.2%. In playoff games so far, they rank sixth with an 82.4% efficiency. The Hounds are currently fifth in the playoffs at 83.3%. The Greyhounds finished the regular season with the league’s top power play, clicking at 28.4%. They now sit fourth, converting at a rate of 34.5%. The Firebirds are converting at a 14.0% clip, the 11th best in the postseason.

Westland, Mich. native Gavin Hayes finished with the most helpers and points by a rookie in franchise history, ending with 49 total points (19 G, 30 A) in 65 games. He’s currently showing three tallies and five helpers. Coulson Pitre led the team’s freshman class in goals (23) this season and had 44 total points through 52 contests. He is the club’s all-time rookie goal-scoring leader, and he has five goals and an assist since the regular season ended.

Luke Cavallin started these playoffs with the league’s seventh-best goals-against average (GAA) of 3.16 and the league’s third-best save percentage (SV%) at .910 through 56 appearances. He earned the most wins in the league and the most in Flint history, ending at 36 victories during the regular season. Cavallin now has the most victories in the playoffs with seven in 11 appearances. He carries a 2.52 GAA and the second-best postseason SV% of .932. Behind Cavallin are two rookie goalies. Ian Michelone appeared in ten regular-season games and picked up four victories. He carries a GAA of 4.37 and a SV% of .884. Michelone was one of only two goalies in the league to earn a shutout this season. Nathaniel Day has two victories in eight regular-season appearances, with a 3.63 GAA and a .883 SV%.

The Greyhounds are led in playoff points by a pair of defensemen. Jack Thompson (Tampa Bay Lightning) has six goals and eight assists for 14 points through eight contests. Fellow rearguard Ryan O’Rourke (Minnesota Wild) is second on the club with one tally and 10 helpers in nine games. Rory Kerins (Calgary Flames) is tied for third in playoff points with one goal and nine helpers. Rookie Bryce McConnell-Barker, who finished the regular season with 23 tallies and 26 helpers through 67 contests, is currently at five playoff points (1 G, 4 A) in nine games.

Saturday’s contest against the Sault Ste. Marie Greyhounds can be heard live on the radio throughout Flint & Mid-Michigan on US 103.1 FM, online at www.us103.com, or by downloading the US 103 app here. Jack Sznewajs will call the play-by-play action on the Firebirds Hockey Network (FHN). Pregame coverage will begin prior to puck drop at 6:40 p.m. (ET) Saturday evening.

Also, all Flint Firebirds’ home and away games throughout the 2021-22 regular season can be watched anywhere in the world online on https://watch.chl.ca/ohl. CHL TV is the league’s new and improved video streaming platform that delivers high-quality live and on-demand coverage of all regular season and playoff games annually. The cost is $6.99 for 24-hour access, or $59.99 to watch the all of the 2022 OHL playoffs.

Next Up: Game 6 of the series, if necessary, will return to Sault Ste. Marie Monday evening with a 7:07 p.m. (ET) start. Fans can follow all the action on the radio throughout Flint & Mid-Michigan on US 103.1 FM, online at www.us103.com, or by downloading the US 103 app here. Jack Sznewajs will call the play-by-play action on the Firebirds Hockey Network (FHN). Game 7 would be played back at the Dort Financial Center in Flint on Wednesday, May 18. Follow flintfirebirds.com and all social media outlets for details on potential tickets for either Game 7 or tickets for Round 3 should Flint advance.