Firebirds Look to Sweep the Week, Take On Sarnia Tonight at Home 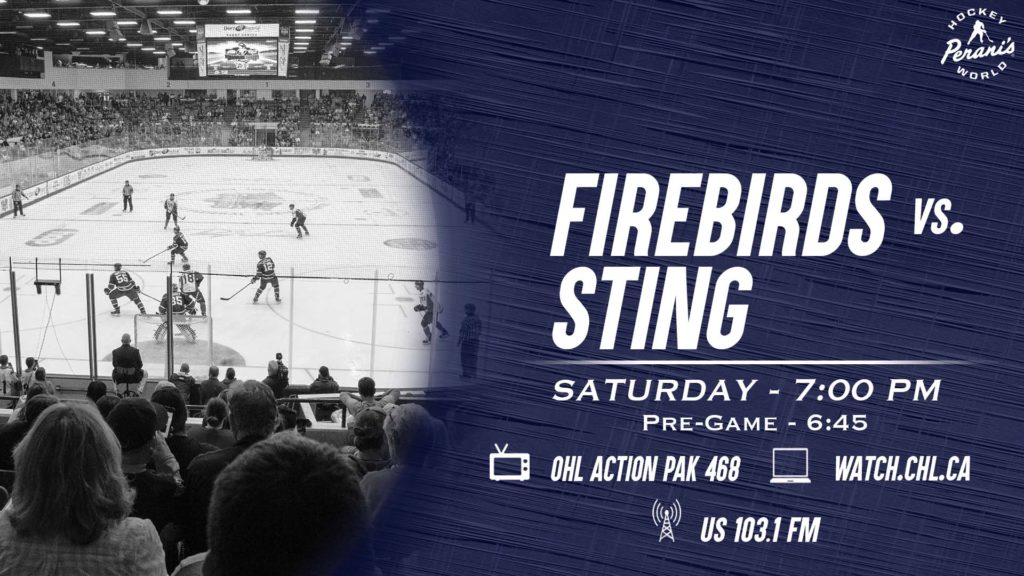 Flint, Mich. –  The Firebirds will play the second leg of their home-and-away series with the Sarnia Sting in Flint Saturday night. The game is themed Healthcare Heroes Night, sponsored by Hurley Medical Center and View Newspapers. All healthcare workers will receive a free ticket at the box office with a valid ID, and friends and family will receive discounted tickets at the box office. Puck drop is scheduled for 7 p.m. (ET) at the Dort Financial Center in Flint.

These teams met last night at the Progressive Auto Sales Arena in Sarnia. Flint skated away with the 6-3 victory in front of nearly 2,500 fans. Luke Cavallin earned his eighth win between the pipes, making 34 saves on 37 shots en-route to Second-Star honors for the game. Brennan Othmann (New York Rangers) was named the game’s First Star for his three-point (3 A) performance. Gavin Hayes scored and picked up two helpers, and Amadeus Lombardi, Ty Petrou, and Riley Piercey each had a goal and an assist.

The Firebirds enter Saturday’s contest in second place in the West Division with a record of 9-6-0-1. The Sting sit fifth in the West with a 7-7-3-0 record. On the road this year, Sarnia is 4-3-1-0 compared to Flint’s home record of 5-5-0-0. Saturday marks the second of eight meetings between these clubs, and the first of four games to be played in Flint this season. All-time, the Firebirds hold a record of 21-17-1-0 versus the Bees and are 13-5-1-0 at the Dort Financial Center in the series. Last season (2019-20) the ‘Birds won five of eight games in the series.

On special teams, the Firebirds are converting with the man-advantage at a 15.9% rate, which ranks them 16th in the OHL. Sarnia has scored at a success rate of 12.1%, which places them 19th. Flint is killing penalties at an 85.3% clip, which is third-best in the 20-team OHL. The Sting’s penalty-kill has shown a success rate of 80.0%, which ranks eighth.

Flint Firebirds (9-6-0-1, 2nd West Division):
Brennan Othmann (New York Rangers) continues to top the stat sheet for Flint with 13 goals and 11 assists for 24 total points through 16 games. He has eight points in his past three games (3 G, 5 A). Othmann is followed on the stats sheet by defenseman Tyler Deline, with two goals and 12 assists in 16 contests. Amadeus Lombardi (5 G, 6 A) sits close behind with 11 total points. Sahil Panwar has been hot of late, scoring four goals and earning four assists for eight total points in his last seven games.

In net, Luke Cavallin has appeared in 14 games this season. He carries a goals-against average (GAA) of 3.35. His save percentage (SV%) is ninth-best among OHL starters at .901. Cavallin has earned eight wins, which are fifth-most in the league, with one of them being a shutout. Rookie netminder Ian Michelone played two full games and carries a GAA of 4.00 and a SV% of .901 with one win.

Ty Voit (Toronto Maple Leafs) tops the Sting in scoring with 21 points (6 G, 15 A) through 16 games played this season. He rides a six-game point streak (2 G, 6 A) into Saturday’s tilt. Nolan Burke ranks second overall in points with 17 and leads the club in goals with 11 scored through 17 contests. Nolan Dann sits third with ten goals and six helpers in 17 games. Dann extended his point streak (9 G, 5 A) to ten games with a goal versus Flint last night.

Sarnia is backstopped by two netminders with NHL ties. Benjamin Gaudreau (San Jose Sharks) has been hot of late, going 2-0-1-0 last week. During the three games, he posted a 1.97 goals-against average (GAA) and a .942 save percentage (SV%), with one of the wins being a shutout. He was named the OHL Goaltender of the Week. For the season, Gaudreau has five wins in ten appearances and a 2.98 GAA with a .912 SV%. Anson Thornton (Arizona Coyotes) has two wins in seven appearances, along with a 3.73 GAA and a SV% of .885.

Saturday evening’s contest against the Sarnia Sting can be heard live on the radio throughout Flint & Mid-Michigan on US 103.1 FM, online at www.us103.com, or by downloading the US 103 app here. Jack Sznewajs will call the play-by-play action on the Firebirds Hockey Network (FHN). Pregame coverage will begin prior to puck drop at 6:45 p.m. (ET) Saturday evening.

The game will also be televised live across the province of Ontario on the OHL Action Pak on channel 468 (4468HD) for both Rogers TV and Cogeco TV cable subscribers. OHL fans with cable television in Ontario can add the OHL Action Pak to their television plan to catch the Firebirds in action, home or away all season long. Also, all Flint Firebirds’ home and away games throughout the 2021-22 regular season can be watched anywhere in the world online on https://watch.chl.ca/ohl. CHL TV is the league’s new and improved video streaming platform that delivers high-quality live and on-demand coverage of all regular season and playoff games annually. The cost is $6.99 for 24-hour access, $24.99 for monthly access, $109.99 for all-access to the 2021-22 Firebirds and OHL season, or $159.99 for all-access to the entire 2021-22 CHL season.

Next Home Game: The Firebirds return to home ice Wednesday, December 8 for another battle with the Erie Otters. Puck drop is scheduled for 7 p.m. (ET) at the Dort Financial Center in Flint. Tickets are on sale NOW here: ETIX.