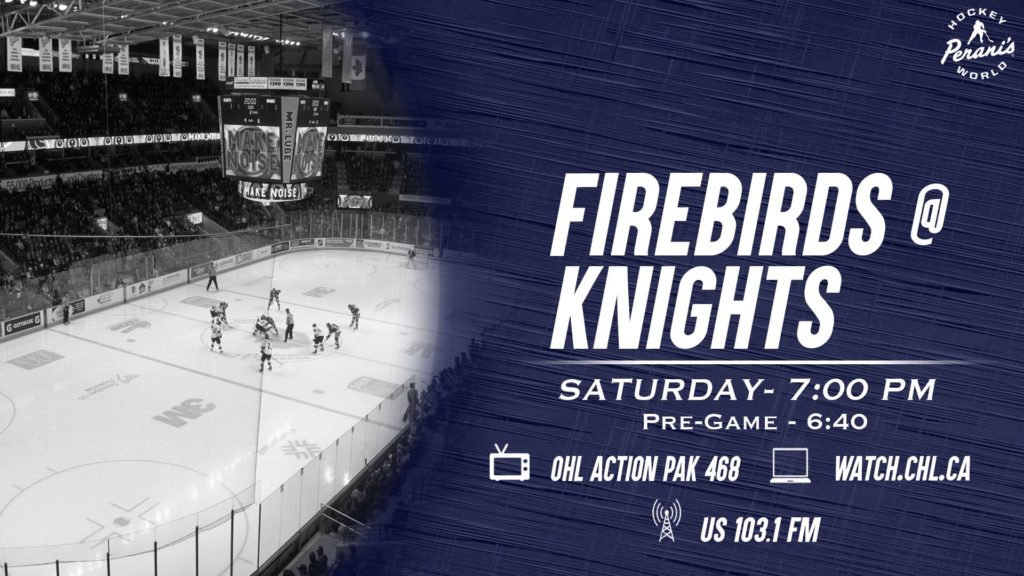 Flint, Mich. – The Firebirds are set to visit London, Ont. for the first time this season on Friday night. Puck drop has been moved up to 7:00 p.m. (ET) at Budweiser Gardens after previously being scheduled for 7:30 p.m.

Both these clubs enter Friday’s tilt in second place in their respective divisions. Flint ranks second in the West Division with a 15-10-0-2 record. They’ve picked up 13 points in their past ten contests, going 6-3-0-1 in that time. The Knights carry a record of 17-8-1-0 and sit second in the Midwest Division. On home ice this season, London is 8-4-1-0 compared to the Birds’ road record of 8-2-0-1. Flint’s win percentage in away games this season is .773, which is the best in the Western Conference and tied for second-best overall and they sit just three points back of the Knights but have played in one more game.

The last time these teams met was November 6 in Flint, when the Firebirds handed the then-undefeated (9-0) London Knights their first loss of the season. Luke Cavallin had an impressive showing in the net, turning aside 24 of 26 shots from the league’s hottest offense. Across the rink, Brett Brochu allowed three goals on 26 shots. Tyler Deline, Riley Piercey, and Luca D’Amato each scored for the Firebirds. D’Amato and Deline also had an assist each, earning them second and third-star honors. Piercey was the game’s first start with the game-winning goal. Liam Gilmartin (San Jose Sharks) and Denver Barker were London’s goal-scorers.

Friday marks the second of six meetings between the two clubs this season, and the first of three games in London. All-time, Flint holds a record of 3-14-2-1 in the series and a record of 1-7-1-0 on the road. In the shortened 2019-20 season, the Firebirds went 1-1-1-0 in three meetings with the Knights.

On special teams this season, Flint’s killing penalties at the OHL’s best rate of 86.3%. London’s penalty-killers are ranked fourth at an 82.2% efficiency. With the man-advantage, the Knights rank fifth in the league, converting at a rate of 25.5% and the Firebirds are 12th, scoring at a 19.5% clip.

Brennan Othmann (New York Rangers) continues to run the leaderboard for the Birds, now with 22 goals and 19 assists for 41 total points in 27 games. He ranks second in the OHL for goals-scored, is tied for second with three shorthanded tallies, and is tied for sixth in total points. Riley Piercey sits second in points with 24 (11 G, 13 A) through 22 games played. Amadeus Lombardi is third on the club with 12 goals and 11 helpers through 26 games.

Defenseman Tyler Deline tops the blue-line unit with three goals and 19 assists for 22 total points. Deline also sits tied for second among all OHL defensemen and tied for seventh across the entire league with 13 power-play assists. He’s tied for sixth-most assists and eighth-most points among rearguards in the league. Rookie Coulson Pitre was just named the ‘OHL Rookie of the Month’ for December, and he now has 21 points (9 G, 12 A) in 21 games. He’s first in the OHL’s rookie class with a 1.00 points-per-game average, tied for sixth in total points for rookies, and tied for seventh in total goals among first-year players.

In net, Luke Cavallin has appeared in 19 games this season. He carries a goals-against average (GAA) of 3.19 and a save percentage (SV%) of .903. Cavallin has earned 11 wins, with one of them being a shutout. His 11 wins are tied for the fifth-most of any goaltender in the OHL. Rookie netminder Ian Michelone has now played in eight games and has four victories. He carries a GAA of 4.03 and a SV% of .889. Michelone remains the only active OHL rookie goaltender with a shutout this season. Nathaniel Day has played 18 minutes of OHL action and made four saves on four shots.

The Knights are led by a pair of forwards averaging better than a point-per-game. Luke Evangelista (Nashville Predators) tops the scoresheet for London with 41 points (21 G, 20 A) in 22 games played. He’s tied for third in total goals, just one behind Flint’s Brennan Othmann. Evangelista is also tied with Othmann for sixth in the OHL in total points and they’re both tied for second in the league with three shorthanded tallies. Sean McGurn sits second with six goals and a team-high 22 assists for 28 points through 26 contests. Tied for third in points are Antonio Stranges and former Firebirds’ center Cody Morgan, each with 23 points. Stranges has six goals and 17 assists in 20 games, and Morgan has ten tallies with 13 helpers in 26 games.

Rookie Colton Smith leads the Knights’ freshmen class with 12 goals, which is tied for the most among OHL rookies, and five assists. Gerard Keene tops the rearguards on the team with ten total points (3 G, 7 A).

Between the pipes, returning netminder Brett Brochu has played in 22 contests so far, which is the second-most of any OHL goalie. He’s earned the most wins, with 16 victories for the Knights. He carried the second-best save percentage (SV%) at .921 and the third-best goals-against average (GAA) at 2.48. Rookie goaltender Owen Flores has earned one win in five appearances. He carries a 4.65 GAA with a .857 SV%.

Friday evening’s contest against the London Knights can be heard live on the radio throughout Flint & Mid-Michigan on US 103.1 FM, online at www.us103.com, or by downloading the US 103 app here. Saturday evening’s call will be simulcasted through the London Knight’s radio partners with Mike Stubbs and Jim Van Horne on the call for Global News Radio 980 CFPL.

Next Home Game: The Firebirds’ next two home games have been postponed by the OHL. Rather than hosting the Knights in Flint on Saturday, January 8, the Birds will now play the Sarnia Sting in Sarnia tomorrow night at 7:05 p.m. Their next home game versus the Kitchener Rangers, originally scheduled for Wednesday, January 12 has also been postponed. Follow FlintFirebirds.com for more updates, as they become available.